There's something instinctively appealing about the serial killer film: The exhaustive and often overwhelming journey its protagonists must face; the terrifying notion of an unstoppable force ready to strike at any time; the relentless pursuit of clues and evidence; an insight into the mindset of somebody driven to murderous acts; the dark and twisted mise-on-scène. Cinema has exploited the serial killer - both fictional and non-fictional - to varying results. Here, we showcase the best of this brilliant sub-genre.

Before DNA testing could nail suspects directly to a crime scene, police procedure owed a lot to ruthless interrogation, guess work and a heavy reliance on instinct. Without necessary proof, a detectives best chance for cracking a case was getting a suspect to admit to his crimes  Memories of Murder shows that a kick to the head was once the most likely way to get that. From Korean director Bong Joon-ho, better known for critically acclaimed monster flick The Host, Memories of Murder  a vastly superior film with a lesser presence worldwide  hones back to an uncomfortable time in Korean policing void of straight answers and explores the true life case of a serial killer (the countrys first) from the perspectives of three cops who cant catch a break. Memories of Murder is partly based on events that swept the Korean countryside in the 1980s: dozens of women were raped and killed between 1986 and 1991 in the Hwaseong region. In the films brilliant opening sequence, unlikely detective Park Doo-man (Song Kang-ho) moves through the eerie paddy fields on the back of a tractor where much of the story is to take place. A womans body has been discovered in a ditch with her underwear covering her face. As he peers down and glimpses her flesh being eaten by tiny insects, Park Doo-man's face exemplifies his lack of experience. As he ponders the situation, a small child mocks him, repeating his every word. This mocking is taken with strained good humour, but it serves as a simple foreshadowing of things to come: He will be mocked this way for the entirety of the case. Told with sporadic humour and a direct sombreness that resonates from the very first frame, Memories of Murder offers a vivid take on the serial killer film because it refuses to make the case simple for both detective and audience alike, reflecting the difficulty of pre-DNA police work - not just for the case in question, but every case ever worked by police institutions without hard evidence. The story also takes place at a time of civil and political unease (air raid sirens are constantly in effect, and violent street riots are common place), putting further pressure on those involved. 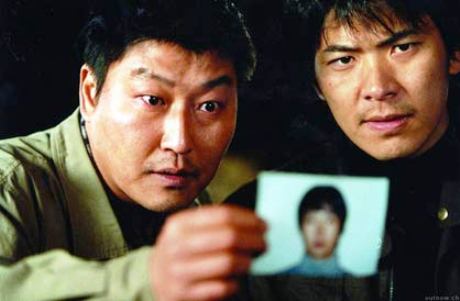 Emotionally complex and densely plotted, Memories of Murder should also be admired for the little details. In one brilliantly dark sequence, Park Man-doo and his partner Cho Yong-koo (Kim Roe-ha) drag a suspect to an interview room and attempt to beat a confession out of him. When blood splatters on Cho Yong-koos shoe, Park Man-doo throws a rag onto the desk, presumably to clean it off, only for it to be revealed as a boot-cover for his partner's shoe. Cho Yong-koo resumes the violence, shoe protected. But for all the films intention to show bumbling procedure and questionable ethics, the characters ultimately come off as troubled victims of their circumstances. These cops dont know any better, and its a notion that only serves to haunt them, especially when they might be looking a killer right in the eye and cant prove a thing. Theyre constantly resulting to embarrassing theories, exemplified during one scene in which Park Man-doo tries to convince the others that the killer has no pubic hair because no traces were found at the crime scenes. He takes to the bath house and surveys the naked men, only to realise how ridiculous an idea it was. The detectives also manage to beat fake confessions out of innocent men on a couple of occasions, which nudges at the legitimacy of previous criminals they've put away - how many should have walked free? Their inadequacy is put to further scrutiny when a city detective, Seo Tae-Yoon (Kim Sang-kyung), arrives to aid the case. His methods are intricate and innovative compared to those of Park Man-doo and Cho Yong-koo, but he soon finds himself on the cusp of insanity as the killer strikes again and again.

The atmosphere conjured by images of thin alleyways, dark tunnels and makeshift villages is truly moody, and provides the film with an unsettling backdrop that emphasises the killer and his crimes. Memories of Murder also utilizes great camerawork, with brilliantly executed long takes and beautifully framed shots of the landscape that exists to taunt the detectives. Other highlights include a heart-pounding chase sequence, a comical scene at a karaoke bar, and a tense showdown with the potential killer in a train tunnel. Memories of Murder grants comparison to David Finchers Zodiac in its pursuit of the seemingly impossible. Like that movie, it isnt merely a telling of facts about a serial killer, but a brilliant meditation of police procedure and investigation in general. It is built with several moods in place, and like the case at hand, proves to be interchangeably satisfying and frustrating. As with the crimes that these detectives are forced to confront, this is a film you wont shake from your memory in a hurry. Exactly the directors intention, perhaps. Next time: Se7en (1995)

We need more writers about Bong-Joon-ho, Kim Roe-ha, Memories of Murder and Reviews! Get started below...
Contributor
T.J. Barnard

10 Movies That Changed Other Movies