Today is Groundhog Day, and while America holds her breath to see exactly how long winter will last based on what side of the bed a small hairy creature got out of this morning, the rest of the world ignores the real tradition of the day and goes back to their DVD and blu-ray shelves to rediscover Harold Ramis' seminal Bill Murray starring comedy. It's dark, it's brilliant and it features arguably Bill Murray's finest performance of his career to date. And like the greatest films, it also comes with a raft of questions to engage those film fans who like to scratch beneath the surface of and discover more. So to celebrate, we're doing just that. And of course, we'll be exploring exactly how long Phil spends trapped in the perpetual loop of Groundhog Day - more of that to come...

7. How Long Does It Take Phil To Decide To Kill Himself? 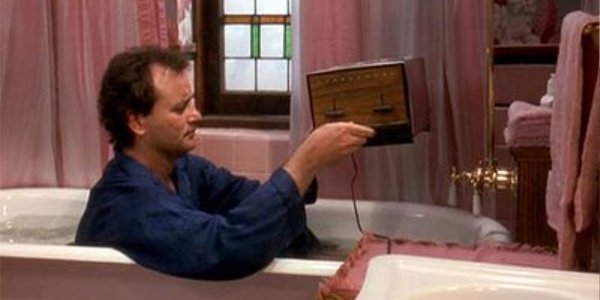 Does Phil really resort to trying to off himself as quickly as he does, simply because he is unable to get Rita to fall for him (which appears to be the suggestion of the film's linear progression, at first glance)? Is he that close to the edge that such a thing is enough to push him completely to despair? The Answer It's probably not all that long, really. When I wrote the How Long... article I postulated that it would likely only take Phil around 20 days from the onset of his despair to reach the point where he wants to kill himself repeatedly in search of an end to his Hell. That was based on the fact that Phil is entirely self-centred, and the very idea of spending any time in Punxsutawney, let alone the prospect of eternity there, repulses him at the start of the film. And look how quickly he turned to crime - it's not as if he has the conventional moral compass of an every day man - that's got to have caused some acceleration in his decision to die. But then, that doesn't mean he took only 20 days trapped in Punxsutawney to kill himself - he spends an awful lot of time attempting to legitimately woo Rita, or at least stealing information and using it to his benefit - remember this is the man willing to spend six months becoming an expert in flicking cards into a hat. So really, he has to have been in Groundhog day at least a while (more than the more than 10 years it takes to become fluent in French)
Contributor
Simon Gallagher
Contributor
Twitter

10 Awesome Movies With No Sympathetic Characters

10 Best Movies With An Unseen Enemy

10 Actors Who ONLY Star In The Worst Movies

10 Great Horror Romance Movies For The Loved And Lost

MCU Phase 4: How And When We'll See Mutants