And so it continues. Child's Play is a really great movie, one of the most under-rated of the greatest decade of horror and unlike Friday the 13th and arguably A Nightmare on Elm Street (although the whole idea of Krueger is a frikkin' terrifying concept), it has aged really well. If you give an 8 year old Child's Play, he's going to find it a whole lot scarier and relateable than the other two. An innocent looking doll with the mind of a serial killer? Jesus, that's heavy stuff when your 8 and your room is full of toys. In the post-Halloween era we now live in, every successful horror franchise is up for grabs and will surely be remade by studio's who can use the material as easy fodder. Shock Till You Drop have spoken to producer David Kirschner, where the unexpected announcement of a new Child's Play movie is in the works was made...

Were discussing it with Don Mancini, who has written all of them with us from the beginning, Kirschner told us. The next one were going to do is were going back and remaking the first one and even pushing it further and making a very terrifying version of the first one, which is pretty scary as it is.

There's more quotes from the full Interview which you can read here, but the main points are... A) Itll be an animatronic doll" (as opposed to CGI) B) I think it would be pretty close to it, thats for sure, but theres some other things that were exploring also, and some twists that we dont want the audience to expect" (in regards as to whether it will stay close to the original's script) C) We havent come up with anybody yet, (in regards to a director) D) No word on whether Brad Dourif would return to voice Chucky. (he will, me thinks) E) A new 20th Anniversary disc of the original Child's Play will be released early next year. Opening in 1988, Child's Play soared to a $44 million taking worldwide on a $9 million budget from horror director Tom Holland, who had in the few years prior given us Fright Night (which has recently just been put in the remake wheel) and wrote Psycho II which saw the return of Anthony Perkins in his most iconic role. Child's Play worked because it played on the fear of every kid who turns off the light to go to bed, but they can see the eyes of the doll they have left on the floor, lifelessly starring at them. The most effective aspect of Child's Play was it's simple slow building narrative and Brad Dourif's terrific energy and the injection of personality into this character, which worked to a chilling effect.

The movie was popular and it quickly spawned a sequel which began production just one year later and made around two thirds of the original's money, but was still a hit. Child's Play 2 played out the same themes as the original and would be directed by the first movie's co-writer John Lafia. Although it didn't quite have the same style as the original, the humor and the violence was ramped up to the full with the belief that audiences wouldn't be quite as scared of the doll the second time around. 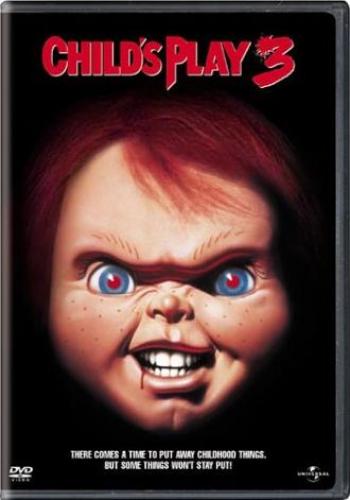 Even quicker rushed into production was Child's Play 3, which was released less than 12 months than the previous film in the franchise and is considered by many to be the biggest 'hack' job of the franchise. Child's Play 3 fell into the hands of future big name t.v. producer/director (Lost, Alias) Jack Bender as his first and pretty much only feature film and despite making $20 million worldwide (which was still low compared to the previous two), it was universally panned by critics and hated by fans but it's most notoriously remembered for the Jamie Bulger case in the U.K. at that time, which played a good part in the series not appearing on our screens for another seven years. 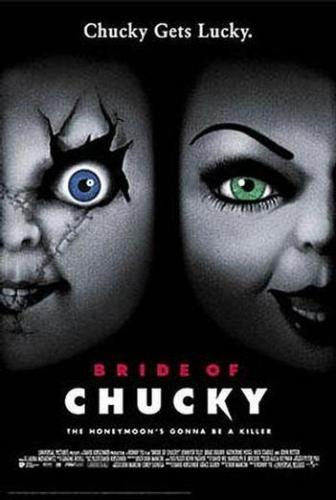 In 1998 no doubt influenced by what was happening with the Scream franchise, Universal Pictures went ahead with Bride of Chucky - almost a self parody of the franchise and genre. The movie saw the Chucky doll get a bride (voiced of course by Jennifer Tilly) and the seven year break was actually in the series' favour, as the film surprisingly went on to make $50 million worldwide, though the $25 million budget was larger than the Child's Play movie than went before.

Strangely it would be six years until Universal went to the 'Chucky' well again. 2004 saw Seed of Chucky released with Don Macini (who wrote all the 'Child's Play movies) make his directorial debut and by now the series had forgotten it was a horror movie and went into full on comedy, albeit the morbid kind. Although not quite as big a hit as Bride of Chucky, the 2004 made a $12 million profit, a feat that all the Child's Play movies had done, though it was pretty clear the series had run it's course by this point. Three years later and rather go the difficult way of writing another movie, they've seen what's happened to the Dawn of the Dead and Halloween originals. Big horror franchises that get the remake treatment have a great chance of making money. Although sadly, it's a movie that is only 20 frikkin' years old and if released into the theatre for the new audience, I'm convinced it hasn't aged enough to not be a big hit. Just release the damn movie as is, most people won't care and those that know the movie will see it anyway. The original Child's Play is not something you can remake easily. Yes the concept is simple and if you get the doll right then your 90% of the way there, but the atmosphere and 80's feeling of the first movie is not something you can buy with a big budget. Can you believe it? 20 years old and it's getting the remake treatment already...
We need more writers about Movie News and childs-play! Get started below...
Editor-in-chief
Matt Holmes
Editor-in-chief
Facebook

10 Horror Movies Where The Villain Survives