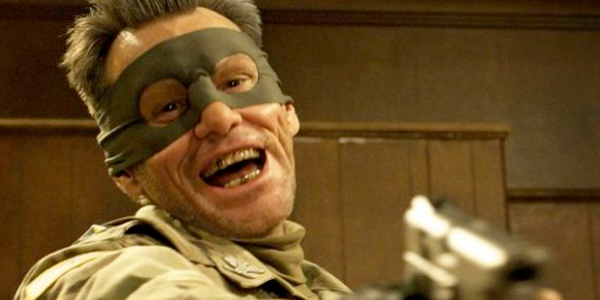 In the trailers for Jeff Wadlow's upcoming Kick-Ass 2, Jim Carrey seems to be having a whale of a good time as the vigilante Colonel Stars and Stripes as he smashes up bad guys with a baseball bat and gets his dog to chow down on certain... areas. But now Deadline is reporting that Carrey is withdrawing his support from the upcoming sequel, denouncing the film's violent content, in the light of the Sandy Hook elementary school shooting in December. Carrey announced his decision via twitter stating:

"@JimCarrey I did Kickass a month b4 Sandy Hook and now in all good conscience I cannot support that level of violence" Carrey tweeted on Sunday. "I meant to say my apologies to others involve with the film. I am not ashamed of it but recent events have caused a change in my heart."

Interestingly, Mark Millar, one of the creators and writer of the original Kick-Ass graphic novels on which the two films are based, responded to Carrey's announcement on his forum page which you can read here.

"There are a lot of stand-outs in the sequel, every actor really firing on full cylinders and an amazing script that moves like a rocket. But Carrey in particular is magnificent" Millar states. " Ultimately, this is his decision, but I've never quite bought the notion that violence in fiction leads to violence in real-life any more than Harry Potter casting a spell creates more Boy Wizards in real-life."

Whether this means that Carrey will be involved in the film's promotional campaign this summer is left unclear at the moment but one can assume that Carrey won't be involved. Carrey is by far the biggest star of the ensemble cast, so it would be a mighty blow to the movie's promotional campaign if he were to pull out entirely. It's understandable where Carrey is coming from with his view, as much of the film's violence involves the two young protagonists, but so is Millar's viewpoint about the nature of film violence. The sequel opens this summer on August 16th (US) and August 14th (UK) and also stars Aaron Johnson, Chloe Grace Moretz and Christopher Mintz Plasse.
We need more writers about Jim-Carrey, Mark-Millar, Chloe Moretz, Kick-Ass, Kick-Ass 2 and Aaron Taylor-Johnson! Get started below...
Contributor
Nick Savvides
Contributor
Twitter

Screenwriter and playwright currently studying in the Graduate writing program at Tisch School of the Arts.