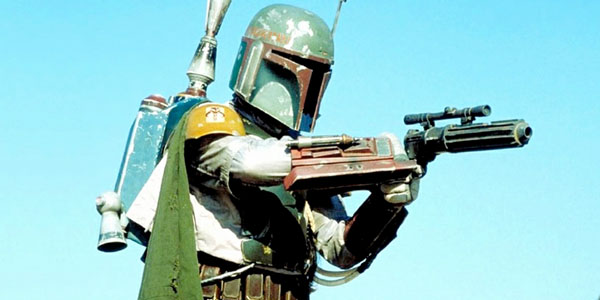 Doing the press rounds for Captain America: The First Avenger, filmmaker Joe Johnston has told Screen Rant about his friend George Lucas catching the Marvel film You know if he wants to see it, I would show it to him, and then suddenly dropped something of a bombshell proclaiming;

Im trying to get George to make a feature based on Boba Fett.

Star Wars fans will of course know that Johnston and Boba Fett have history. In fact they go wayyyyy back - Johnston was working as a concept artist and special effects technician on George Lucas' groundbreaking trilogy when he designed the character and also the Millennium Falcon, Yoda among other things. Johnston went on to win an Oscar for visual effects on Raiders of the Lost Ark before becoming a filmmaker in his own right making The Rocketeer, Jumanji, Jurassic Park 3, Hidalgo, The Wolf Man and most recently Captain America. He hasn't worked with George Lucas in over a decade since co-helming The Adventures of Young Indiana Jones: Spring Break Adventure but now the Star Wars prequels are a well distant memory (though they will be revived in the soon to be released Blu-rays) he perhaps thinks the time is right to pitch a Boba Fett movie I imagine he has wanted to make for years.

The ruthless Bounty Hunter Boba Fett has of course grown to be an iconic character of the Star Wars universe, even though his screen time in the original films is so minimal. He did get a pretty meaty back story which was completely bizarre and Lucas gave it his best shot at ruining the character in Attack of the Clones and if you are like me, I totally dismiss the ideas brought about from the movie... but a stand-alone Boba Fett feature? I would love to see it and Johnston would be the man to direct it. But would Lucas really let anyone else play with his Star Wars universe without a dictatorship-like involvement? Seems unlikely. More likely would be Boba Fett showing up as a character in the Lucas Star Wars t.v. show if they ever get around to making it. Seems a long shot...
Want to write about George Lucas, Joe-Johnston, Star Wars and Boba Fett? Get started below...
Editor-in-chief
Matt Holmes
Editor-in-chief
Facebook