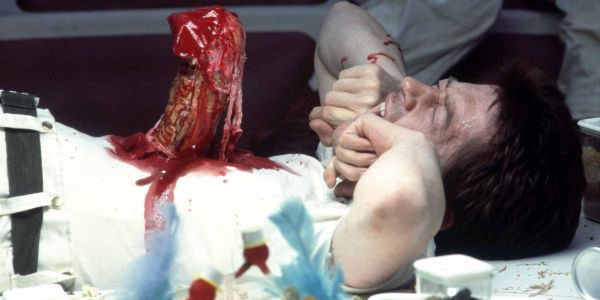 I've just finished a turn with Tiverton Dramatic Society in A Man For All Seasons, Robert Bolt's classic play about the life and downfall of Sir Thomas More. In this production I played Richard Rich, the ambitious young man who ultimately betrays More, stepping into the shoes of John Hurt who had played him in the Oscar-winning film version. All of which got me thinking: out of all Hurt's great performances, on how many Top 10 lists would Richard Rich make an appearance? Over a career spanning more than 5 decades, John Hurt has become one of the most highly-regarded actors of his generation. He was recently honoured with a BAFTA Lifetime Achievement Award, and seems to work relentlessly on both stage and screen. We all remember the career-making chest-burster scene in Alien, or his transformation into John Merrick in The Elephant Man, but in a career so long and so revered, a few great performances are bound to slip through the net. This list looks to rectify this, paying tribute to one of Britain's national treasures without just falling back on his most famous work and thereby resorting to platitude. So, let's dive into John Hurt's 10 most underrated performances...
Contributor
Daniel Mumby
Contributor
Twitter
Facebook