Sam Raimi now has full creative control over Spider-Man 4, so most, if not all major decisions are his. That wasn't the case with the last movie where Raimi lost an awful lot of pre-shooting battles but it's certainly the case here, just so you know who is responsible. Movieline carry the exclusive Spidey 4 scoop from that esteemed Oscar nominated actor John Malkovich is now favourite to play Adrian Toomes, a former electronics engineer who employs a special harness of his own design that allows him to fly and endows him with enhanced strength. He becomes a remorseless killer, dubbed The Vulture and will be the main villain of Spider-Man 4. The news is officially unconfirmed but we do know that Raimi likes Vulture, and Raimi likes Malkovich (the actor was down to the final few on the Green Goblin casting for the first movie), so it sounds legit to me.

Sir. Ben Kingsley was offered the same part in Spider-Man 3, before Marvel yanked the character away from Raimi during the pre-production stages. The Vulture? Colour me disappointed. The Vulture isn't anyway close to being the most exciting villain of the Spider-Man franchise and unless he was used in the first movie (as it would have been more about the origins of Peter Parker, than how interesting the villain was), or as part of a big Sinister Six plot then I really don't see the use in involving him at all in this series. Not when the franchise has more intriguing villains it can call on (Kraven the Hunter - but Marvel are too scared to use him) and has been building to a big Dylan Baker/The Lizard pay-off, which will once again go unfulfilled. Malkovich is said to have entered talks and yeah I can believe it. He is physically perfect in shape, size and age, and he's the Raimi kind of actor, from the same pool as an Alfred Molina or a Willem Dafoe. He is perfectly cast as a killer villain and as much as I enjoy Ben Kingsley's work, I do think that Malkovich might be more suited to this franchise. He has more of a sinister edge. So as much as I don't think Vulutre is right for this movie, the casting and character choice is so Raimi-esque but I just don't know what to make of the next bit of news. It is, if true, the strangest decision I've seen this franchise make yet...

I wrote on 19.11.09 that Hathaway was a square peg, for a round role in Spidey 4. Movieline confirm that another Oscar nominee, Anne Hathaway, who was first rumoured as Felicia Hardy, aka Black Cat, IS in talks for the picture, and IS in talks for the Hardy role. Though her villainous alter-ego is going to be a divergence from the comics. A huge, huge divergence! Her Felicia Hardy won't become Black Cat - Marvel's answer to the famous DC Comics anti-hero Catwoman but will instead turn into a brand new villain created for the movie, that of The Vulturess, the daughter of Malkovich's Vulture who takes up his hand-me-down costume to extract revenge on Spidey, i.e. the Green Goblin saga of the first three movies. Yes, feel free to read that bit again. The changing of Hardy into the Vulturess is a massive break from the Marvel comics canon, and for comparison's sake to non Marvel-ites, it would be like making Catwoman the daughter of The Penguin, and calling her The Penguiness. Will this Vulture style Hardy even wear the famous feline costume? Will her hair be white? Will she even wear black?

Black Cat, as she appears in the comics. Two thoughts from this... 1) Why in God's name would you use a character like Felicia Hardy in this scenario, instead of creating a BRAND NEW CHARACTER to play a BRAND NEW CHARACTER? Where is the endgame in pissing off the fanboys and seeing a character they are already invested in and will be looking forward to seeing a 80-90% faithful translation on the big screen, take such a crappy sounding left turn? Who wins? 2) If Raimi was wanting a father/daughter scenario with two already established characters... then I don't think any fanboy would be royally pissed off if you had made The Vulture and The Black Cat (as she is in the comics) as a family. That would be fine, because the relatives of either character, as far as I have read, have never been the point of much contention, so that would be a nice addition to the movies that we could all agree with. It would be like when they made Henri Ducard into Ra's Al Ghul for Batman Begins. That was fine, it was a smart move. But this just sounds awful. 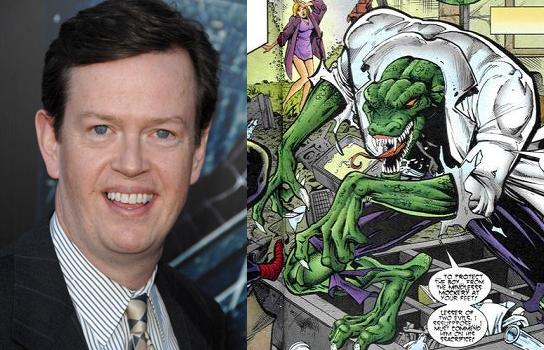 Baker, whose Spidey character Dr. Curt Connors first appeared in the second movie, has slowly been building up his role but Marvel are hesitant to pull the full villain trigger with him. Movieline also tell us why we won't be seeing The Lizard as the main villain this time around, or possibly ever time around...

What does this mean for poor Dylan Baker, whos patiently played Curt Connors in the last two installments? As much as it would seem that the series is setting up his eventual transformation into supervillain the Lizard, we hear that the suits simply cant bring themselves to sign off on such an odd-looking enemy  instead, theyd rather hew closer to villains with a human face.

Again, this is further fuel to me thinking this story is legit. If you listen to the commentary on all three Spidey movies, a frequent point is made out from Raimi that the most important thing he was looking for when shooting the movies was the ability to see the face of his characters. That's why Spidey often loses his mask, why Venom's kept being pulled back in Spidey 3 and why Harry Osbourne's Green Goblin wasn't a full covered face mask. He hates nothing more than just hearing character's voices with their face hidden behind masks. So if that's the reason they don't want to use The Lizard, then I can believe it. So until an official announcement, which we presume has to be soon as the movie is due out in May 2011 and it's getting late in the pre-production day now, we have to take this as rumour... although I would suggest a very solid one.
Want to write about Dylan-Baker, Spider-Man 4, Anne-Hathaway, Movie News and John-Malkovich? Get started below...
Editor-in-chief
Matt Holmes
Editor-in-chief
Facebook