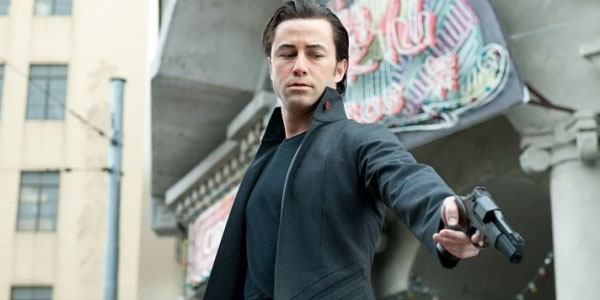 Could you kill your future self? The unique concept that Rian Johnsons latest film Looper is sold on. Throw in Joseph Gordon-Levitt playing a young Bruce Willis, sporting facial prosthetics, contact lenses and doing a mean impression of the action legend and you have a very appealing piece of cinema. Which is why it is such a shame that Looper is a half baked disappointment: a jumble of ideas that tries but fails to be something original, deep and genre defying. In the year 2072 time travel has exists, but it is a heavily guarded secret and used only by the mob. As security is so high in 72 the only way they can get rid of someone is to send them back in time to a designated spot where the a looper waits to kill and dispose of the body. Joseph Gordon-Levitt plays Joe, a Looper in 2042. Loopers kill for money and are employed until their future self is sent back and they kill them. Joe leads a shallow existence of prostitutes, drugs and night clubs. And when not doing these activities to forget about what he does for a living, hes learning French and hoarding his money away so when the day comes that he is retired in the future he can live his life here in the past. This also changes when Joes future self  Bruce Willis  is sent back. When Joe hesitates to kill him, Older Joe takes his chance and flees. Joe must find and kill his older self before his boss  Abe (Jeff Daniels)  kills them both. So Joe pursues his older self from one protracted action set piece to another, constantly evading his fellow loopers who are also on the case, until he gets the chance to be face to face with his older self and discuss their dilemma in the films dialogue heavy but deeply philosophical scene. Here, at a roadside diner, over steak and eggs, they discuss that burning question, could you kill your future self?

The first thirty minutes of Looper are bogged down with long pieces of expository dialogue. Now while it is a valid argument that for such a high concept piece like this you need some form of explanation, and I am by no means anti-V.O. by McKee standards, but I do think the filmmaker spelt things out too clearly and made it a too simplistic viewing experience. I cant help wonder whether the studio stepped in and enforced this voice-over on the director for fear of confusing audiences. Given that this is a ostensibly an action film, with high hopes for box office success they can ill afford to lose the teenage demographic to please filmgoers who like to work out things for themselves. Much like Blade Runner originally suffered from having that horrible voice over narration track inserted into it by the studio  against the wishes of messrs Scott and Ford  I think Looper has suffered too. It is a compromise and point of contention, but for me, it did not make the first thirty minutes entertaining viewing. The film doesnt really start to come together until the third act, by which time its too late. The plot is transported from the distopian streets of 2042 to the countryside where Joe takes refuge from his pursuing employer in the home of southern single mother Sara (Emily Blunt) who is raising her son Cid. Not wishing to give the plot away, but all forces converge here and Joe is posed with whether he should protect Sara and Cid.

Unfortunately this comes too late in the movie. It would be like Kyle not meeting Sara until three quarters of the way through Terminator. Or not allowing Harrison Ford the time to go Amish in Witness. The relationship that needs to develop between Joe and Cid and Sara does come together, and the climactic scene is powerful, but nowhere near as powerful as it could have been. Its as if the filmmakers struggled to find the real crux of the story that wanted to tell. Too much time was spent on the unique selling point of could you kill yourself and setting up the world of the Looper that character and emotional journey never got the time or attention it deserved. All the ingredients are there, they are just not properly defined. The performances from the two male leads are on the whole very good. Levitt convinces as a young Willis. And while his voice goes in and out of Willis from time to time, its still a great impersonation. More to the point, Levitt has screen presence here. Hes convincing in the action set pieces, poised and emotional on the on the right levels and hits all his character beats with great skill. He has steadily honed his craft and now, will hopefully soon start to get the strong critical recognition in the mainstream he has enjoyed on the indi circuit for so long. Its also Bruce Willis best screen outing since Unbreakable. Here, in almost Eastwood style, he says very little with dialogue but much with subtle facial expressions, body language and lethal, devastating action.

Emily Blunt is solid as always; she seamlessly slips into the role of the southern over-protective mother who projects more poise, strength and certainty than she actually possesses. Her accent never wavers and she proves here again that she is as versatile as the best actresses in Hollywood today with the ability to convey so much simply with her eyes or the way she breathes. Jeff Daniels on the other hand is under used. His character is under developed and he isnt given the screen time or material to be a convincing villain. Its a real shame as his casting in this role  a somewhat juxtaposition for Daniels  was something that really excited me. I was almost hoping for a Henry Fonda like turn in Once Upon a Time in the West. Take it on face value and Looper is actually an entertaining piece of sci-fi with enough action derived from the very unique idea it is sold on to make this worthy of cinema viewing. Though undoubtedly the most original out of Total Recall and Dredd, like these two titles it manages to feel like something you have seen many times before; repainted, re-branded and sold as something new but yet unnecessary. I hope I am right to expect a directors cut that does for Looper what Ridley Scotts take did for Blade Runner. Lets just hope Rian Johnson doesnt become quite as obsessed with perfecting it as Sir Ridley. Looper is released in cinemas on September 28th.
We need more writers about Bruce-Willis, Rian-Johnson, Emily-Blunt, Joseph Gordon Levitt, Looper, Jeff Daniels and Reviews! Get started below...
Contributor
Adam Rayner
Contributor
Twitter

10 Movies You Hated Before You Even Saw Them