We are back to late 05/early 06. Sam Raimi has his villain for Spider-Man 4, the same bad guy he originally wanted to go with for Spider-Man 3 - The Vulture - who would have broke out of prison with Flint Marko (Sandman), and acted as the more evil of the pair in a fight against Spider-Man. He's got an actor to play him... John Malkovich (last time round it was Sir. Ben Kingsley). But once again Sony, just like they did some years ago, just aren't sure andhave reportedly been diagnosed with last minute cold feet. My spidey senses are tingling! From a studio exec point of view, I can sympathise somewhat. An aging, kind of pathetic, bald, 56 year old villain in a big green costume, with feathers and who can fly but doesn't look cool and hasn't sold a Spidey book in years AND certainly isn't hip for a generation who have grown up with the Spidey movies, the 90's Spider-Man animated cartoon and video games - is the last character you would want to be the main villain for your studio's biggest franchise. If we are talking business, and you have to remember that this industry is first and foremost about making money, then Sony made the correct decision in not using The Vulture and putting in Venom last time around. Spider-Man 3 is one of the highest grossing movies of all time with a $890 million worldwide total, and all the pre-movie talk and hype was on the big monstrous villain. Merchandise sales for Venom, I presume, was off the charts.

Simply put, financially it worked. It killed any creativity and enthusiasm from director Sam Raimi and it resulted in a pretty awful picture for us but money talks. Bottom dollar is key. Sony don't really care about the fanboy's feelings, whether they were hurt or not, they only care about the paper in their wallets. And whoever the villain is, whether we liked the last movie or not, we will see Spider-Man 4 anyway, and they know this. Which is why the trailers are much more geared towards the average Joe Public because that isn't guaranteed cash. Now from an outsider looking in, Sony gave Raimi carte-blanche on whatever he wanted to do with Spider-Man 4UNTIL it got to this 11th hour stage - maybe they've seen the character designs, read the much worked on script (3 different writers, and it's still being worked on as of now) and are starting to freak out. They appear to have told Raimi that it's a no-go for The Vulture but haven't yet decided which villain they think is cool enough for the kids to be drafted in at this stage. Raimi is furious, of course and quite rightly, will feel a little messed around. As will his production crew who are said to be "pissed" at these developments.

This is where we start to get worried. This is when catastrophic decisions in a project are made because the clock is clicking, this one is a go for the Spring and Sony have their May 2011 release date that they don't want to give up. Given the ticking clock, would it really surprise us if Sony went directly ahead with drafting in a villain we all love and who has major fanboy recognition, someone like Kraven the Hunter or maybe even someone newer like Carnage (or it wouldn't surprise me... Venom again) and basically use the outline they have for the previous villain and just roll over the text in the script with their computer mouse and change the names. That is very, very, very troubling indeed. 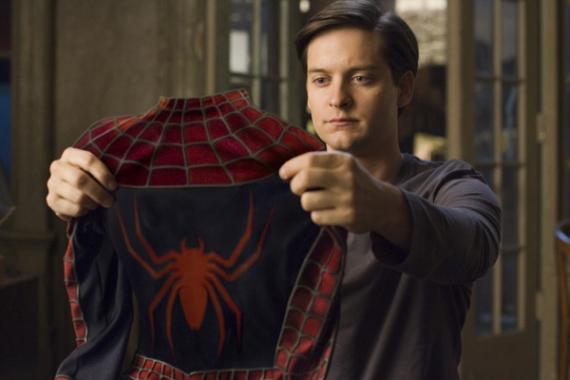 As of right now, Sam Raimi and Sony are at logger-heads. And don't believe that half-assed studio denial about the project being on "holiday hiatus" (but conveniently, with a script that's still being re-written... no holiday for them!) - this project is in major trouble and if Sony don't compromise for Raimi, then he's gonna bail before too long and probably take Tobey Maguire with him. Raimi is right to stand his ground, not to compromise. An artist doesn't compromise. With the success of Drag Me To Hell, we were all mega surprised to see the recently awakened creative giant return to this series in the first place. Of course it's so dear to his heart, he built it for God's sake, but maybe it's time for him to let-go. Rarely does a director make the first three in a franchise, and they never go for a fourth within a decade and Sony are gonna keep making Spider-Man movies long after Raimi has gone. He can't outlive a studio. Swing away to something else, I'd say. Let Sony fuck-up the franchise on their own.