Stuart Schulbergs Nuremberg, originally released in 1948, is distinguished as the first documentary made about the Holocaust. While exhibited fairly extensively in Germany as part of the Allied De-Nazification initiative, it received little play elsewhere, and with the U.S. soon enough turning their attention to Cold War concerns, the film became something of an artefact. Resurrected and restored by Schulbergs daughter Sandra alongside Josh Waletzky  complete with both a new title and score, as well as strong re-recorded narration provided by Liev Schreiber  Nuremberg remains in its new form a harrowing but important contraction of the key beats which brought about some of World War 2s most heinous acts. Beginning with footage of a desolate, restless post-war Europe, Schulberg then transports us to the beginning of the Nuremberg trials, as footage recorded by and confiscated from Nazi soldiers  much of it appearing in this doc  is turned inward and forms part of the evidence used against them. It is a fascinating legal play and one which in effect helped the Nazi conspirators tie their own nooses, as well as illustrate the film mediums mighty political potential. 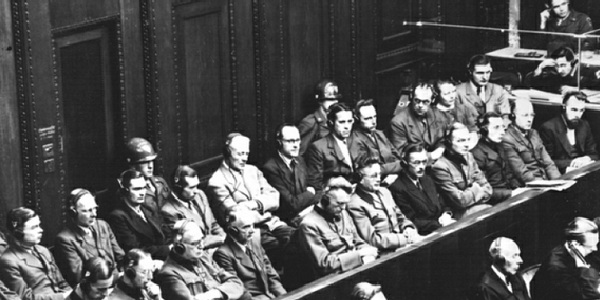 A chilling opening statement from U.S. Supreme Court Justice Robert H. Jackson lodges firmly in the mind as it focuses on the notion of collective worldwide responsibility to stop tyranny, about dealing with a previously unimaginable capacity for evil. Thankfully this is not a notion we have to ponder much nowadays, but this prologue of sorts is a firm reminder of mankinds savage capabilities. Poring over extensive footage retrieved from Germany, Schulberg starts at the beginning, with the birth of the Nazi party, and how the infamous Reichstag fire of 1933 was leveraged to limit civil rights in the country. From here, industry picked up, Germany began mass-producing weapons, instigating compulsory military service, all ultimately in preparation for the impending war. Frightening it is how obvious in retrospect the Nazi conceit seems, and how easily Adolf Hitler deceived the world, as well as, so it is claimed, some of his own followers. While Schulbergs documentary is simplistic enough for those not acquainted with the finer historical details, the extensive array of evocative imagery on display will likely make it of interest to well-schooled history buffs also. What distinguishes it truly, is that Schulberg opts not to reductively railroad his film directly towards the Nazis most infamously heinous act, instead probing into all the disturbing pretext as well.

A well-structured narrative format keeps things pacily bounding along, cutting between the trial and footage of the lead-up to World War 2, the war itself, and the aftermath. While the imagery of emaciated prisoners and mass graves, though familiar, never ceases to shock, the lesser-known reactions of those in the dock prove almost as disturbing. Responses range from bored, with palm resting on face, to aggressively unrepentant, while others claim to know little of the Nazi partys more grievous infractions altogether, decrying Hitlers betrayal of their core values. Ultimately, as the verdict is read, most all are damned as the inevitable flaws of their flimsy defences  many of which hinged on Germany having little idea of how its own infrastructure operated  crumple. Providing some modern context with its reissue might have been useful, though one can appreciate Sandra Schulberg not wanting to insist herself upon her fathers work. That said, subtitling to help identify the various defenders in the dock would have been unobtrusively useful, given the degraded nature of the film print (admirably restored though it is). Schulberg achieves a difficult editorial feat of breezing through a hugely significant part of world history without ever appearing to rush. The lack of currency admittedly places us at something of an arms length to it, and as such it is less a passionate examination to be championed, and more a vital historical document to be admired.

Harry Potter Quiz: Can You Match The Albus Dumbledore Scene To The Movie?

The Lord Of The Rings Or Harry Potter Quiz: Which Film Series Is It From?