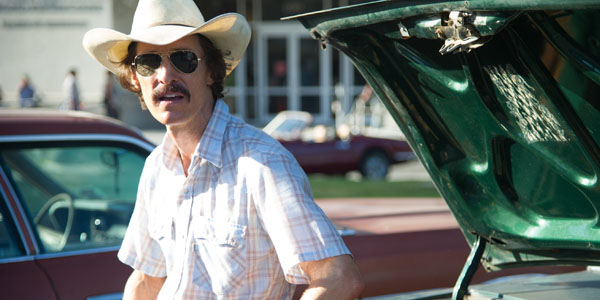 Recently, some pundits have been putting McConaughey as a possible bubble candidate, contemplating that one of the late-arriving entries, such as Leonardo DiCaprio in The Wolf of Wall Street or Christian Bale in American Hustle, might take the spot of the Oscar-virgin. While anything's possible in a year as jam packed with triple-A performances as this year has been, frankly, I find the idea of McConaughey missing out on a nomination absurd. McConaughey's remarkable career re-imaging has been one of the top stories in the world of cinema over the last two years, and while no single performances from his many impressive turns last year was able to build enough consensus around them for McConaughey to receive his first nomination, this year, it's clear everybody is on the Dallas Buyers Club bandwagon. Besides the urge to reward a terrific and deep body of work delivered over such a short time span, there is the fact that McConaughey's performance in Dallas Buyers Club is just damn good. While the eerily gaunt condition of his body proves his commitment to the part, there is much more to the performance than the weight loss that has earned McConaughey kudos. McConaughey truly embodies this character, both physically and mentally, and makes what would otherwise be an average film something much better. With what appears to be strong general support for the film, along with a guaranteed Best Supporting Actor nomination for McConaughey's costar Jared Leto, I can't see Academy members checking off the movie in these categories but skipping over McConaughey's name for Best Actor. It just won't happen. Nomination Chances: 80%
Contributor
Christopher Lominac
Contributor
Twitter