Bit of a restrained column this week with just the pick of the bunch, due to an enforced absence from Obsessed Towers for myself, and the cumulative effect of trying (and failing) to see Inception three flaming times over the weekend, with fate conspiring on all three occasions to make it impossible, and making me see inferior alternatives like Lost: The Motion Picture Predators. And don't get me started on the dearth of technology that means cinemas cannot rewind films when interrupted by various catastrophes- some people don't care about Health & Safety when there's a film rolling! But that's another story.

You might also notice the conspicuous lack of DVD Dump-Bin as well- so that's probable reprieves for Zombie Samurai, Cash & Curry and the Justin Hawkins-featuring Psychosis (reviewed here)- but fear not, it shall return next week.

Anyway, I hear Minimalism is the new Black.

So, this week I have been mostly watching: Emma Thompson avec prosthetics in Nanny McPhee & The Big Bang, the big-screen adaptation of the late Steig Larsson's hugely popular The Girl With The Dragon Tattoo, and the surprisingly good The Crazies remake. In addition, I got my paws on Chloe, starring official Hot New Thing Amanda Seyfried, the long-awaited Blu-Ray transfer of Donnie Darko and the excellent, and utterly hilarious Ricky Gervais Show on DVD.

Read on for more...Nanny McPhee & The Big Bang new to DVD and Blu-Ray

Ask me nicely and I will unashamedly admit that I love family films. Especially those that are shown at around 7pm on a weekend evening on terrestrial television, or around Christmas. Things like Babe, Harry Potter and Hook: I just can't get enough of the easy-going, gentle entertainment that doesn't demand too much of the audience, but still leaves you feeling thoroughly satisfied. You can add Nanny McPhee to that list now that I've seen them both (they're released as a box-set alongside this stand-alone release).

What really stands out is the film's charm- the storyline is framed with some magical goings-on like flying pigs, and Nanny McPhee's various machinations that will ensure that kids love it, and there is enough in there for adults to enjoy, especially in the shape of Bill Bailey's cameo. I can't really help but draw a distinctive comparison with Bridget Jones here, as the film has the same kind of gently twee appeal for kids that Bridget seems to for adults, albeit in an entirely different genre, and there is the same kind of quaint roguish charm in there, thankfully making sure that Nanny McPhee could never be counted as a mere modern Mary Poppins clone. If there is anything to criticise it is that it doesn't quite have the broad, age-gap defying appeal of the first, but for a sequel it is a bloody good go.

If this wonderful Swedish adaptation of the phenomenally successful novel by Steig Larsson feels a little like it was made for TV, it is because it is essentially a recut of two made-for-TV films meshed into one feature. But that isn't to cheapen the film's success. While the cinematography is as beautiful as one might expect a Swedish native to be, the underlying themes of cultural and political exorcism and an exotic, mesmorising performance by Noomi Rapace which is as near-overpowering as Natalie Portman's turn in Leon, while retaining a deeply troubling animalistic side and a mystery that make her utterly compelling.

With stupifying inevitability, there is a 2011 American remake currently in pre-production, which just about says everything you need to know about Hollywood. "Ah yes, it was good, but I couldn't be doing with all that foreign speak- let's do a filmic Hitler and just make it like we are the only ones that matter in the world! Hurray!"

The Crazies new to DVD and Blu-Ray

It would have been easy to dismiss The Crazies as just another product of the current industry fascination with the horror remake, but to do so would be to condemn it to unfair criticism. In any light, The Crazies is a worthy heir to the original's title (especially given that it wasn't exactly Romero's best), and it stands up even better when considered as a film in its own right. While not quite hitting the high of Zombieland, The Crazies manages to outstrip about 90% of the Zombie-flicks that have hit screens in the last ten years, even with Timothy Olyphant in the lead. To be fair to him, he is actually pretty good (something I didn't think possible up until this point) though it is always unfortunate to have to add a caviat like I just did to a sentence including praise. Perhaps I'm a little too cruel to Olyphant (I blame him almost entirely for Die Hard 4.0 not being what it should have), as on the strength of The Crazies, the man can act.

Chloe new to DVD and Blu-Ray

I had high hopes, but sadly this remake suffers from something of a crisis of identity. Oddly it spins what is a pretty lurid story at its heart out pretentiously, as if trying to suggest it is something of greater artistic merit than it could ever hope to be. The fact that the story becomes a farce towards the end doesnt really help the cause, especially as the film begins very quickly to feel like it was rushed to completion. I can't forgive that, especially in a film with such high opinions of its base subject, and nor can I forgive the criminal underuse of Liam Neesson, who feels like an Extra to the "real action" of the central female pair- lovely and watchable as they are- of Julianne Moore and Amanda Seyfried. Must try harder.

HBO must be the envy of the free world thanks to their phenomenal stock of programmes and seeming inability to put a bad TV series together- they are about as close as anyone will ever come to being the Pixar of small-screen production, and that's saying something. The Ricky Gervais Show is something of an oddity when placed alongside the behmoth success stories like True Blood, Band of Brothers and The Sopranos, as it doesn't immediately appear to have the same gloss and high-production values. But make no mistake, The Ricky Gervais Show was an incredibly shrewd pick-up by the American network, because of the original podcasts' huge following, and the obvious potential for cross-over appeal. A lot of it is due to the sheer brilliance of Karl Pilkington's logic-defying idiocy, and incredible quotability factor, which is lovingly brought to screen with some fantastic animation (all very reminiscent of The Flintstones to the untrained eye). It packs serious laughs in, and it is near impossible not to be immediately charmed by Ricky Gervais' screeching laugh. Buy it! 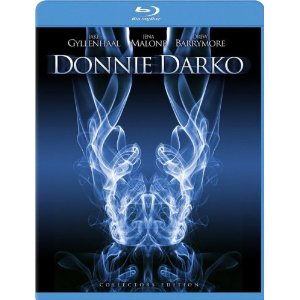 The film was a hell of a head scratcher when it first came out, and heralded the big screen arrival proper of Jake Gyllenhaal on the back of some serious cult fame. Sadly, the follow-up S. Darko was about as much fun as licking live batteries, but with half the energy, but we won't hold that against the original. And finally, it's been given the High-Def treatment, and been bundled alongside the superior Director's Cut for good measure.

In all honesty the transfer isn't all that grand, adding little in terms of image quality to a consumer's eye at least, but in the current climate of High-Def transfers attempting to over-strip their originals to a shocking and derogatory degree it is pretty refreshing to see how little it has been fucked with. In addition to the largely faithful visuals, the sound has been given a welcome make-over with the new track adding delicious clarity to the music in particular.

The Extras are a heady combination of both the original DVD and the 2004 Director's Cut edition, with multiple behind the scenes featurettes and a very good commentary featuring Kevin Smith alongside director Richard Kelly representing the high-points of the bunch.

It was only a matter of time with the new version hitting screens recently in the US, and about to karate chop its way through the British box-office that the originals (the first two, not the terrible third and fourth offerings that followed) were given a fancy re-release. To be perfectly honest, I thought they'd just go for the Boxset re-release, including the other two films, which is also available to buy today and leave it at that, but thankfully, the classic karate duet of films has been handed a Blu-Ray transfer.

And what a transfer, comparatively speaking. These new High-Def treatments are by far and away the best-looking versions of the film ever released, without ever being over-stripped of the grain and detail that is a natural characteristic of films around the twenty year old mark and counting. The reds in the film's pallet might be a little over-zealously boosted in places (which is only noticeable during the final Crane Kick sequence of the first film) but that is really unnecessarily knit-picking at a thoroughly impressive pair of transfers.

Sometimes releases hit the shelves that just make your jaw drop. There isn't a formula to that achieving effect- though I'm sure someone out there would pay a pretty buck to acquire it- but there are certain boxes a release can tick to aim high at least. Extras are alway a good entry-point: anything that goes beyond the usual boring staples of Deleted Scenes, one half-hearted Commentary and some Filmographies gets a favourable look, but you really have to try harder even than that, with interviews and documentariesreally grabbing my attention. Elsewhere, the transfer has to be clean and do justice to the original film- if you have the incredible privilege of transferring a classic or an oldie to High-Def you should treat it accordingly, not through heavy-handed DNR so everyone looks like they're made of plastic, and not by giving it no attention whatsoever. These are cardinal crimes. Next up is the artwork- never NEVER add some bargain basement visuals that look like they took roughly three minutes to Photoshop.

Or basically, in fewer words- do as Criterion do. The company can do no wrong when it comes to wonderfully unique and authentic DVD and Blu-Ray releases, with a stable of titles that reads more like an Essential Viewing Guide than anything else. The latest two additions to that stock are The Red Shoes and Black Narcissus, both seminal works, and both no doubt given the usual 7 star treatment. If you have a region free player, as I know my own editor does, you'd be a fool not to go out immediately and hand over the necessarily quite-high cover-price to add these, and every other Criterion title to your collection. I guarantee they will supercede every over-hyped Special Edition and Ultimate Edition in there already.

10 Actors Who FREAKED OUT When Their TV Character Died

10 Movies You Should Watch (Even Though They Suck)

10 Directors Who Admitted Their Movie SUCKED

10 Movie Secrets Everyone Knows Except You

10 Recent Movies Where The Reshoots Were Obvious