Comic book movies have gotten a bit too serious of late. Dark. Brooding. Po-faced. Sure, we all loved Christopher Nolans tortured Dark Knight trilogy and Zack Snyder delivered the years most intelligent blockbuster (so far) with his gap year Superman slowly finding himself while bumming around being a crab fisherman in Man Of Steel. But does anyone really care if Tony Starks having nightmares and panic attacks in Iron Man 3? We just wanna see someone get punched through a building. And yeah, Hugh Jackmans Wolverine may be bad-ass but really hes just Victor Meldrew with muttonchops and a bad manicure  a grumpy old codger whose memory aint what it used to be. To be honest, if we wanted subtle character studies of damaged people we wouldnt be watching a movie with the words Marvel Studios or DC Entertainment anywhere in the credits. Sometimes all you want from a Summer movie is some balls-out, unabashed, crowd-pleasing mayhem. Based on Warren Ellis comic book mini-series for DC, RED 2 then comes as something of a welcome relief; its refreshing to see a comic book movie that sets out so gleefully and simplistically to entertain, thrill and amuse its audience.

So cartoonishly violent (Bruce Willis literally drops a safe on a baddies head, all thats missing is a Looney Tunes boink! noise) it should be sponsored by ACME, RED 2 sees superannuated CIA black ops agent Frank Moses (Willis) still Retired and Extremely Dangerous and trying to enjoy the quiet, suburban good life with civilian girlfriend Sarah (Mary-Louise Parker) but its clear the honeymoon is over however; Frank all but wraps Sarah in cotton wool while she craves excitement and adventure. Luckily, Franks paranoid ex-partner Marvin (John Malkovich) turns up out of the blue and reveals that, thanks to a Wikileaks-style website, their involvement in a Cold War doomsday project that saw them help plant a nuke in Moscow is now public knowledge and theyre at the top of every intelligence agency in the worlds hit list including that of friend and former colleague Victoria (Helen Mirren) and sleek assassin Han (Byung-hun Lee) who nurses a grudge against Frank. Helped and hindered by Franks ex, FSB general Katja (Catherine Zeta-Jones), the race is on to find the bomb, save the world and rekindle the romance in Frank and Sarahs relationship before the CIA retires our heroes permanently. Indifferently helmed by veteran TV director Dean Parisot and so gleamingly gun fetishistic it would give Ted Nugent an erection, RED 2 is dumb, loud and a darn sight more pleasurable than it really has a right to be due, largely, to the likeability of the characters and the chemistry of its cast. As they trot the globe, bumbling from one unimaginative shootout to the next incoherent action set-piece, each sequence punctuated by stylised animated comic panels, Willis and Malkovichs charismatic double act are a joy to watch, Neil Simons bickering Odd Couple with large calibre weapons, Willis playing grumpy, reluctant straight man to Malkovichs acid casualty conspiracy theorist. 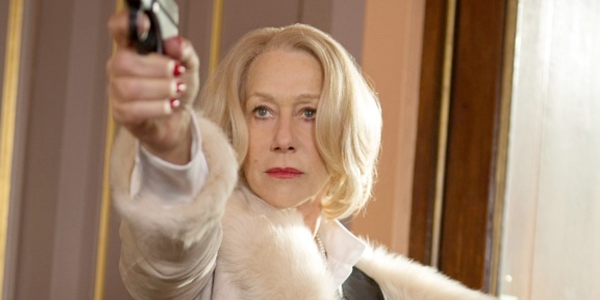 Theyre ably supported by Parkers spiky Sarah (who at least gets something to do in this installment), her unconventional interrogation of the brilliant David Thewlis hacker one of the comedic high points of the film, while Zeta-Jones man-eating femme fatale and A Bittersweet Lifes Byung-hun Lee are fun new additions to the team but largely superfluous. Sir Anthony Hopkins chews the scenery like its a human liver as the maddest of mad scientists, more Doctor Snuggles than Doctor Lecter, while, in a happy coincidence thatll launch a thousand future pub quizzes, his Hannibal predecessor Brian Cox returns once again as Victorias suave, lusty, Russian lover Ivan. Its true, however, that there aint nothing like a dame, Mirrens sexy, sophisticated hit woman Victoria stealing the film from under the boys noses, Dame Helen delivering a performance thats by turns playful, naughty, matronly and adorable. Forget the plot (you may as well, the writers do at regular intervals), RED 2 is that rarest of beasts; a goofy, entertaining Summer romp that doesnt take itself too seriously and doesnt expect you to either.

Red 2 is out now in US cinemas and opens in the UK on August 2nd.
We need more writers about Helen-Mirren, Anthony-Hopkins, John-Malkovich, Catherine Zeta Jones, Mary Louise Parker, Red 2, Reviews, Byung Hun Lee and Dean Parisot! Get started below...
Contributor
David Watson

David Watson hasn't written a bio just yet, but if they had... it would appear here.

20 Films To Watch If You Love Halloween But Hate Horror