Prince of Persia: The Sands of Timeis the latest film from Jerry Bruckheimer, the producer of such action-oriented blockbusters as Armageddon and Con Air as well as the man behind Disneys wildly successful and hugely lucrative Pirates of the Caribbean series. And it is that franchise which Prince of Persia is most transparently desperate to imitate, with its predominantly British cast, exotic locales and its inclusion of a wacky miscreant with a heart of gold character (Alfred Molina is the Johnny Depp substitute here). Much like a Pirates movie, Prince of Persia has a narrative which is driven by the pursuit of a magical object, in this case the Dagger of Time. This dagger (unsurprisingly) enables the person who wields it to travel backwards in time for a few minutes, with the user the only person who remembers what has happened. This is a point we are reminded of quite often within the films script. In one scene the prince (played by Jake Gyllenhaal) explains how the dagger works twice in as many minutes and (even after you have seen it in action several times) this is not the last you hear of it. Yes, Prince of Persia co-writers Boaz Yakin and Jordan Mechner (the creator of the video game of the same name, upon which the film is loosely based) have precious little respect for their audiences ability to retain important plot information and the script is clunky as a result. To make matters worse, the film serves as an allegory for the current Iraq war, as a ruler (misled by bad intelligence) invades a neighbouring city in search of weapons which do not exist. This misplaced clamouring for topical relevance is made all the more absurd by the films own naked cultural imperialism, as none of the principle Persian characters are portrayed by Iranian actors.

There is also an uncomfortable exploitative feel to the films depiction of Gemma Artertons Princess Tamina, the Princes feisty love interest. There is more than one lingering cleavage shot (at one point there is a close-up of her breasts which ostensibly represents the Prince eyeing up her necklace), as well as a scene in which the Princess emerges from a pool of water in damp tight-fitting clothes. No doubt acolytes of Megan Fox will find themselves in cinematic bliss, but I just end up feeling like a pervert forced publicly to confront the ghosts of teenage fantasy. But no one comes to see a Jerry Bruckheimer film for the politics (or the dialogue for that matter), so I suppose the best way to judge Prince is to ask the question did I get a big enough bang for my buck? The answer to that question is an emphatic sometimes. There are some really well choreographed chase sequences which involve acrobatic feats of free running (a discipline that never seems to lose its on-screen appeal) as well as some great, epic shots of large-scale battles  a spectacle not really seen onscreen very much in the last decade. In true Bruckheimer style, there are also big, fiery explosions which erupt in blazes of un-intended self-parody at various parts of the film, providing some amusement. It must also be said that Mike Newell, a director not known for high-octane, action films (having made a reputation on the cosy likes of Four Weddings and a Funeral and Mona Lisa Smile) does a decent job of making the action scenes coherent and watchable, certainly when compared with the likes of Louis Leterriers The Incredible Hulk or Michael Bays Transformers: Revenge of the Fallen (both made by supposed action movie specialists).But Newell is as uninspired as he is reliably efficient and the film never becomes any more than competent even in its best moments. 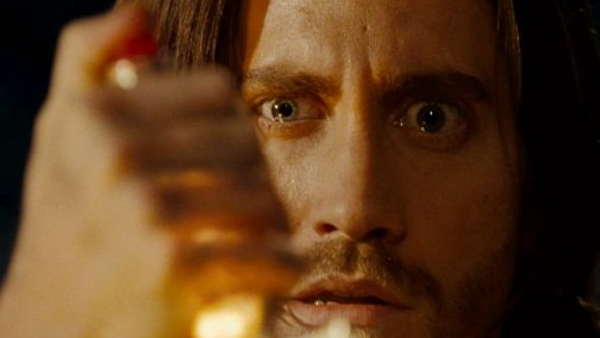 Of the cast, Jake Gyllenhaal does an admirable job as the titular Prince Dastan. To avoid the furore that would doubtless have enveloped the film had this Persian Prince spoken in an American accent, Gyllenhaal delivers his lines in an accomplished (if equally out of place) English one. As an action hero he neither fits the type of the muscle-bound bore (like say, Sam Worthington or Gerard charisma vacuum Butler) nor the weedy, pretty-boy (like Orlando Bloom) and therefore manages to avoid being hateful as the films conventional, in-offensive protagonist figure. The aforementioned Arterton is alright in her restrictive role as proud princess/romantic prop, but at a time when the likes of Marian Cotillard, Carey Mulligan and Penelope Cruz possess a magnetic charisma and intelligence (as well as beauty), it is doubtful she will become an enduring star. Sir Ben Ghandi Kingsley adds another fine paycheck to his CV (he can now add Uncle Nizam to his roles in Thunderbirds, The Love Guru and BloodRayne) with a performance that plays completely to type and doesnt require him to break an acting sweat. Alfred Molina fares rather better as the film's comic foil and often rises above the material to give the picture some genuinely funny (if isolated) moments. But even with Molinas presence, there isnt a single stand-out character who suggests this film could live up to its billing as a franchise tent-pole in the same way Captain Jack Sparrow did for Curse of the Black Pearl back in 2003. Prince of Persia: The Sands of Time is not a good film. Nor is it an especially bad film. For the most part it is a competent film which is helped to seem a bit better than it is by the extreme low quality of recent blockbusters. From a business point of view, the film could well recoup its money, but a possible lack of audience enthusiasm could kill of this franchise before it has begun. And no one will go to the funeral. Not because it will have made enemies, but simply because everyone will have forgotten it ever even existed. 'Prince of Persia: The Sands of Time' is released in cinemas on the 28th of May.
Want to write about Movie News, Prince of Persia: The Sands of Time and Reviews? Get started below...
Contributor
Robert Beames
Contributor
Twitter

A regular film and video games contributor for What Culture, Robert also writes reviews and features for The Daily Telegraph, GamesIndustry.biz and The Big Picture Magazine as well as his own Beames on Film blog. He also has essays and reviews in a number of upcoming books by Intellect.

10 Movie Characters Cut From Sequels (In The Worst Way)

Doctor Strange 2 Casting To Pay Off THAT MCU Fan Theory?

10 Movies That Unbelievably Cut What We Wanted To See