Out now on DVD, Digital HD and Blu-ray is the handsome epic, Exodus: Gods and Kings. Ridley Scott films tend to look rather incredible, and of late, part of that is down to his work with cinematographer Dariusz Wolski. We had a quick chat on the phone, about Exodus, working with Scott and Wolski's new project, shooting a documentary about Keith Richards. Brendon: Can we try to establish the basic working processes between yourself and Ridley Scott? Dariusz: Ridley is very specific about what he wants but, nevertheless, he's always open to suggestion. He loves to use multiple cameras, and I do too, but it can be a bit of a puzzle to get them there. He likes to stage the scene and then find a way to photograph it; we discuss the staging, then find places for the cameras, and it's a bit like a Rubik's Cube, putting things together so it all works well. Brendon: So is the staging worked out before the actors come onto set? Dariusz: Ridley goes through rehearsals with his actors, but that's mostly about the script. When it comes to staging the whole spectacle, he does very extensive storyboards. Then again, when we're on the set, we're still pretty open about it. The storyboards are essential to the certain visual ideas he gets very early in the process, and for the production design and art department, so they're working within what he wants to shoot later. Ridley is very flexible, though, so we do make things on set. It's essential to be able to do this on such complicated movies. Brendon: So your role, or part of your role, is to suggest notionsf Dariusz: I'm always asked by journalists and film students, What is yours and what is his? It's so hard to define. It's a great collaborative experience, to which I bring my set of skills and he is, of course, the driving force of the movie. I can't tell you where the line is. Brendon: It's the whole Lennon & McCartney thing. Dariusz: All I can say is that I'm always creatively fulfilled. 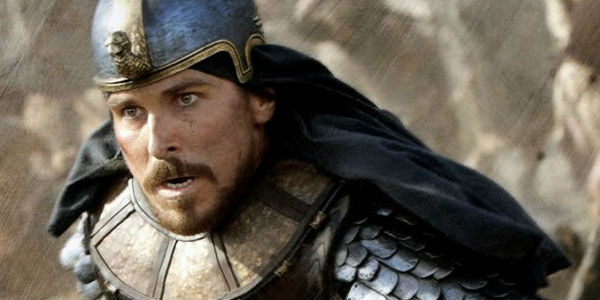 Brendon: So when it comes to designing the look, the film's palette, the way the world will be framed, do you spend a lot of time talking to Arthur Max and Janty Yates? Dariusz: It's a big brainstorming session from the beginning. Ridley, Arthur, Janty and I always talk, and the ideas are constantly evolving and developing. There's constant dialogue. Brendon: Do you often look at visual resources and other artists for inspiration? Dariusz: Of course we looked at paintings. We were looking at this 19th Century artists, a little kitschy for my taste, who did a serious of paintings of Egypt. There was a little bit in that style, very colourful and very rich, which we used just as a starting point. Brendon: Was that Poynter? Dariusz: This one wasn't Poynter but his name doesn't come to mind. Brendon: Do you look back at your past work? How would it feel to watch Exodus now, do you think? Dariusz: I'd like to see it five or six years later when I could think Oh, that's actually not so bad. Brendon: Long enough to forgive yourself for mistakes, I'd guess? Dariusz: To have a distance. You try to make every film as good as you can and you agonise over details so much you can't really have an objective point of view. It takes four or five years to step back from the painting. Brendon: I'd imagine that your Keith Richards documentary exercised entirely different muscles? Dariusz: Different in that there no VFX, but it was similar in other ways. Brendon: I was imagining you having to reframe on the fly a lot to capture documentary footage. Dariusz: Well, it was like the way Ridley works, with three or four cameras. It wasn't too much different. Surprising, isn't it? But there's no chariot sequence in that film  I don't know that Keith would last in a chariot chase. Brendon: I don't know. I wonder if Keith Richards isn't completely indestructable. Exodus is available on DVD, Blu-ray and Digital HD now. Play it on the biggest screen you have.
We need more writers about Ridley Scott, Interviews, Dariusz Wolski and Exodus! Get started below...
Movie News Editor
Brendon Connelly
Movie News Editor
Twitter