Ridley Scott's Exodus is out now on DVD, Digital HD and Blu-ray, so I had a chat with the film's costume designer, the exceedingly talented, effortlessly charming Janty Yates, about on working on this film, and with Ridley Scott in general. We touched a little on their upcoming sci-fi film The Martian and unmade would-be classic Tripoli too. Brendon: Does Ridley bring a lot of the first ideas to the table or does he expect you to set the agenda first of all as you start each project? Janty: Usually, I get the script quite early then spend three to four weeks doing really serious research. Then I present Ridley with a show and tell, and that's when he mentions, for example, that I'll need to come up with a new armour for the Hittites. That's what happened this time. We get an awful lot hammered out in that first show and tell. Then, as we go along we do costume fittings, and Ridley likes to come along. I did Christian 's fitting in Ridley's office, and he came along to three of Joel 's fittings. He loves to participate, and he does really care. Everything is always collaborative and you've got to have your director's approval, but you've also got to have your actor's approval. A happy actor is a happy performance. Brendon: And you're seeking their approval through comfort more than anything else, I'd guess? Janty: You're more worried about the stunt team's comfort because they're the ones who complain. They'll be galloping on horses in these costumes every day, but the actor only has to gallop the once.

Brendon: Do you find it gets easier the more you work with Ridley? Janty: I can't assume anything, but we do have a sense of short hand, which is a huge bonus. Brendon: Sometimes the project seem to get going quickly. The Martian seemed to come out of the gates very fast. How much prep time do you want and do you get that time? Janty: Recently, from Prometheus onwards, we've been rather time-poor in prep. It's slightly stressful and slightly nervewracking. On Gladiator I had seven or eight months of prep, on Prometheus I had four and a half. But you just have to knuckle down. You don't want to let Ridley down so there's a lot of working at night, a lot of working at the weekend. Brendon: How do you break down that four and a half months? Janty: If it's period, you start by seeing what is already around, in costume houses in France, Spain, Italy and England, find out what you need to build. On Exodus I had a workshop set up by Stefano De Nardis, who had to make about 6000 costumes because there really wasn't anything out there at all. Then you start prototyping for actors, and you'll have your first fitting with them. Some ideas work and somes don't, so back to the drawing board. It's very much actor driven by that time. Brendon: What does that mean practically? Is it really just a question of giving them what they want? Janty: By 'actor driven' I mean that you need to build up their closet of costumes, it becomes about that. Ramses had thirty changes in the first six weeks. You've just got to motor on and hopefully you get everything done long into production. Brendon: I assume your closets aren't all ready on the first day, but it's more of a rolling thing? Janty: It's absolutely a rolling thing. I don't know if you recall the village where Moses gets married? We shot that in the last two weeks so we were able to create all of those costumes much later, during filming. 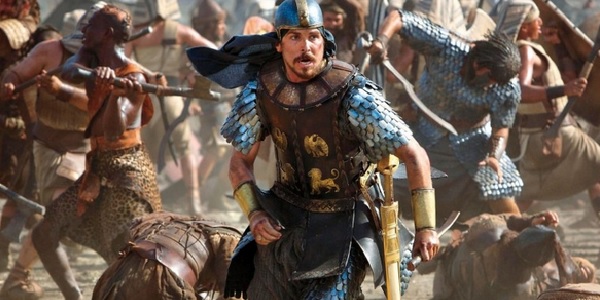 Brendon: Comparing Exodus and The Martian, it seems like they'd exercise different parts of your skillset. How similar is the process each time? Janty: The process is similar, because you make prototypes, fit actors, craft clothes from scratch. But every film is its own challenge. Three years ago we did The Counsellor which was high-fashion, and we just had to jump into this world with both feet. Brendon: Do you dabble with basic designs before the green light comes on a project? Janty: I'm not really allowed to, but we do start work before the green light, before the actual A-OK from the studio. I've always done a huge amount of unpaid, unheralded research by then, which has paid off on the whole though there's a couple of projects that I hold close to my heart and which I spent weeks on that we're just not going to do. Brendon: I'd imagine Tripoli was one of those? Janty: We were absolutely passionate about that. It's such a great script, and that was one of them. Brendon: I really think you, Arthur and Ridley should get together and at the very least release a book, so we can see what you were thinking on your unmade films. Janty: You'd should speak to the writer who has sold it to various studios who haven't run with it. Next time I see Ridley I will ask him about this book idea, in actual fact. Exodus: Gods and Kings is on DVD, Blu-ray and Digital HD right now.
Want to write about Ridley Scott, Interviews, Exodus and Janty Yates? Get started below...
Movie News Editor
Brendon Connelly
Movie News Editor
Twitter

DC Movies: Can You Name The Movie By Just One Image? New