Independence Day was Roland Emmerichs masterpiece. A classic piece of genre-cinema or, rather sub-genre cinema, he perfectly grasped the essence of the alien invasion film that was so popular in 1950s America and, while it had its narrative roots in HG Welles War of the Worlds, was largely fuelled by the litany of UFO reports that beset North America following a sighting by pilot Kenneth Arnold in 1947. The film was a resounding commercial success and provided an astonishing spring-board into super-stardom for one Will Smith. As a consequence, there was considerable excitement when Emmerich suggested in 2009 that a second, perhaps even a third Independence Day movie may be on the way. When asked about the project by Empire recently, however, Emmerich dismissed the notion that the film will see the light of day any time soon:

Previous internet spread rumour concerning plot and characters appear, therefore, to be no more than speculation. Other rumours concerning ongoing negotiations for a return for the now infinitely more expensive Smith seem far closer to the mark though, given the stunning business the first film did, and a new found spate of alien based films like Battle: Los Angeles, Emmerich is determined that the sequel will definitely happen some day. 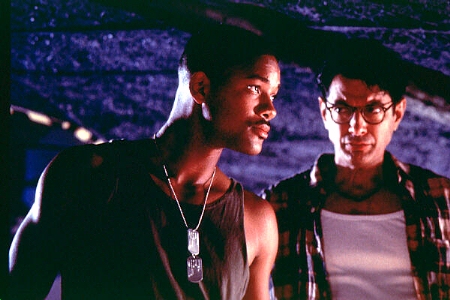 In the meantime, the German director who has enjoyed himself by reeking catastrophic CGI destruction across planet earth ever since Independence Day, has departed from his usual themes to tackle a historical political thriller. His new film, Anonymous, stars no lesser acting talents than Vanessa Redgrave and Rhys Ifans, and concerns the true authorship of William Shakespeare's plays and the plotting that went into deciding the succession of Elizabeth I. He is likely to be back in more familiar CGI laden territory of science-fiction soon, however, with the oft-mooted trilogy of 3D films based on Isaac Asimovs Foundation. He says of the movie;

Weve hired a production designer and its mainly now to find out what the movie will cost. Itll take us until the end of March, then well decide. The studios happy with the script, but nows the time that the numbers count. I want to make a movie thats very different from other science-fiction movies and I dont want to have the burden of too big a budget.

Ben Szwediuk hasn't written a bio just yet, but if they had... it would appear here.

What If You Only EVER Ate Fruit?

10 Well Known Actors Who Got Worse Over Time New

10 Star Wars Changes George Lucas Made That Were Completely Justified

10 Movies That Are Basically One Big Apology