A mere two weeks ago it would have been absurd to suggest that a film adapted from a graphic novel about video games and rock music, starring Hollywoods hottest young talent, and directed by a hugely admired, cult director would be one of this summers biggest box office bombs. Yet that is exactly what has happened to Scott Pilgrim vs. The World. After recouping a mere $10 million dollars and entering the U.S. box office top ten at number 5 on its all-important opening weekend, the film has quickly become branded as a flop, despite mostly glowing reviews. So while I must admit to being slightly distracted by these developments, I endeavoured to view the film solely on its artistic merits. And I can conclusively say that Scott Pilgrim is a good movie. Michael Cera plays the eponymous Scott Pilgrim: a video game playing, wannabe rockstar, slacker  hold back obvious questions: havent we seen this character before? Havent we seen Cera play this character before? Still in the process of getting over his ex girlfriend  bona fide rock chick Envy Adams  he hooks up with 17-year old doting, Asian, Catholic schoolgirl Knives, only to then inharmoniously dump her for the pink haired, edgy and aloof Romano Flowers (Mary Elizabeth Winstead) who also happens to be hot. But theres a catch: in order for them to date happily ever after, Pilgrim must face and defeat her seven evil ex-boyfriends. Cue a cavalcade of surreal, insane, video game, kick-ass action the likes of which I have not seen on the big screen before. From the moment we see the Universal logo and the trademark tune both manipulated to resemble an old Atari game, we know this is a project of passion. The essence of the graphic novel is captured perfectly, as is the world of video games of all ages and genres. A sense of place is also captured, with the  as yet - under-used city of Toronto fully embraced and showcased in the movie, so much to the point that Toronto itself becomes a character. Cera turns in another faultless performance, which might not be particularly distinct from any of his previous roles, but certainly boasts a more demanding physical challenge, which he meets with due diligence.

He is skilfully supported by a number of wonderful young actors; of the seven evil exes, special mention should go to Jason Schwartzman for his cerebral, super-villain, Chris Evans who pokes fun at his own action star persona; and Brandon Routh, who shows that he is far more than Brian Singers cardboard cut-out Superman and turns in a fine comedic showcase. Kieran Culkin is the hilariously witty, gay roommate  a character and performance owing more than a small dept to the character of Terry Crabtree, played by Robert Downey Jr. in 2005 shockingly underrated Wonderboys, while first timer Ellen Wong distinguishes herself as the 17 year old Asian, Catholic schoolgirl (I guess such a girl exists only in Toronto?) with a splendidly balanced performance of comedic timing and kung-fu mastery. The movie isnt without problems. While the supporting cast is sublime, its simply too big and there are too many similar serving characters. The result is an overpopulation of people who arent given satisfying roles in the plot or payoffs; consequently extremely talented performers, including Oscar nominee Anna Kendrick are left woefully underused. 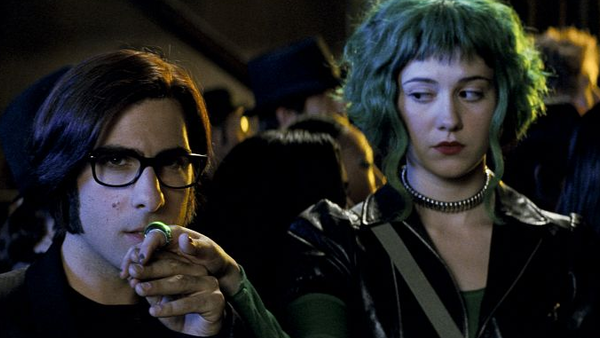 The constant quick cutting and sharp editing does have a tendency to become distracting and one could contend that the film is too stylised. But I would argue the latter is a bit of a moot point, considering this is an ode to video games and based on a graphic novel, which in both cases style plays an integral role to story and character. And this is a film by Edgar Wright, a filmmaker renowned for his stylistic cinematography and editing. Wright is in his element here, giving great balance to pop culture homage, comedy, character, story and also emotion. It would be easy to brand Wrights sublime body of work  Shaun of the Dead, Hot Fuzz and Spaced  as simply hilarious, stylistic comedic works, but Wright is a filmmaker who recognises the importance of story and character. So while on the surface Scott Pilgrim is a plot driven, teen action flick about a guy fighting the object of his affections ex-boyfriends one-by-one, it is actually a film about relationships and romantic etiquette, which builds to a highly satisfying, existential denouement.

So why did a movie of such class and such seeming mass appeal fail to attract an audiences in American? The argument that it is too esoteric has been banded about, but I think given how ubiquitous video games are amongst the 15  25 year old demographic, which studios attribute such a high proportion of their gross to, this seems like a weak argument. It seems the fault lies with the distributors, who perhaps in a moment of bull-headed over confidence, chose to open the same weekend as The Expendables  boasting the biggest cast of action superstars ever!  And Eat, Pray, Love  the Julia Roberts rom-com. I have no doubts that if they had chose to wait a few weeks, let these titles have their time and wait for the core demographic to return to school or college and get over the deluge of summer movies, the tale of Scott Pilgrim vs. The U.S. box office would have been a much rosier tale. So for the sake of cinema and inventive filmmaking, I implore everyone to go and see Scott Pilgrim vs. The World and buy it on home release. For its flaws, this is still a piece of innovative, original filmmaking, filled with hilarity and heart. Scott Pilgrim vs. The World opens in the U.K. on Friday.
We need more writers about Edgar Wright, Brandon-Routh, Chris-Evans, Michael-Cera, Jason-Schwartzman, mary-elizabeth-winstead, Scott Pilgrim vs. The World, Anna Kendrick, Kieran Culkin, Ellen Wong and Reviews! Get started below...
Contributor
Adam Rayner
Contributor
Twitter

Oscars 2021: Who Should Win Every Award (And Who Actually Will)

10 Movies That Totally Lied To You

10 Movie Sequels Nobody Asked For But Ended Up Being Awesome

7 True Story Movies That Left Out The Real Horrific Ending

10 Awesome Movies With No Sympathetic Characters