Spies have been stalking the Romanian base of Ghost Rider: Spirit of Vengeance and have uploaded this video of Nicolas Cage in his full Johnny Blaze get-up. There's also a glimpse at directors Mark Neveldine and Brian Taylor (Crank, Gamer) who are behind the camera for the sequel. http://www.youtube.com/watch?v=ScX3rjmreBE I haven't been following the development of Ghost Rider 2 as closely as I should have (mainly because the first film is such a mess) but it seems I've missed some suprising casting coups, as the great Ciaran Hinds is playing The Devil, and that there's roles for Violante Placido (The American), Idris Elba and even Christopher Lambert (though he is only in talks). It seems Eva Mendes has been cut though, as has the budget that originally stood at $135 million but has now been almost halved to $75 million. The reason being Sony are spending so much money on their Spider-Man and Men in Black franchises that they are running low on cash, and have brought in Hyde Park Entertainment to help them out on this one. The original Ghost Rider took home $115 million domestically and $229 million worldwide from a $110 million budget, so the budget cut is consistent with what you would expect from a film that performed as modestly as it did. 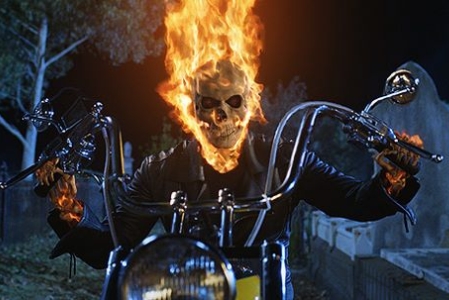 The film is based on an old David Goyer screenplay that was touched up for the sequel and that revolves Ghost Rider hiding out in Eastern Europe where he is called upon to stop the devil, who is trying to take human form. Thanks to Bleeding Cool for the heads-up!
We need more writers about Nicolas-Cage, Movie News, Brian Taylor, Mark Neveldine, Idris Elba, First Look, Ghost Rider 2, Christopher Lambert and Violante Placido! Get started below...
Editor-in-chief
Matt Holmes
Editor-in-chief
Facebook