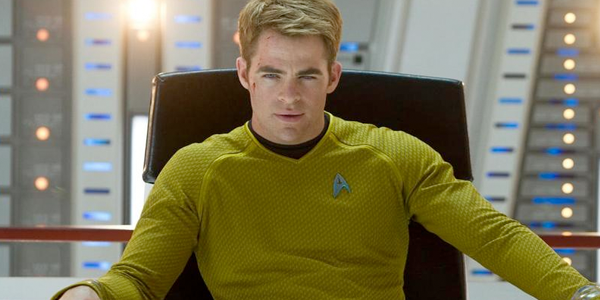 When actor Chris Pine was hired to play James T. Kirk in the J.J. Abrams Star Trek films, he knew he couldn't simply do an impersonation of William Shatner; it would have come across as parody. He had to find a way to capture the essence of Kirk without directly imitating the original actor. This was fairly easy in 2009's "Star Trek" because he was playing a very young Kirk  something Shatner had never done. But with "Star Trek Into Darkness," Pine was required to take on the more familiar captain's role, and he manages to make it his own. Here's a look at five moments when Pine's performance made us say, "Oh yeah, that's Kirk!"

5. He Is Obsessed With The Enterprise

Walking with Spock across the campus of Starfleet Academy, en route to a meeting with Admiral Pike, Kirk can barely contain his excitement. He is absolutely sure that the Enterprise has been chosen for Starfleet's first deep-space, five-year mission. It never occurs to Kirk that he is being summoned for disciplinary action. So when Pike tells him, "They've taken the Enterprise away from you," it takes several seconds for the realization to sink in. Then we see the light fade from Kirk's eyes. His identity and self-worth are tied to that ship, and when he loses command, he has nothing. Chris Pine conveys all this with subtle facial expressions, and his reaction is consistent with Kirk's single most defining characteristic. Many times during the original Star Trek series, we heard Kirk refer to the Enterprise as "MY ship." The depth of his obsession became apparent in the episode "The Naked Time," when a virus caused crewmembers to reveal their true emotions. On the one hand, Kirk seemed to complain that he wasn't allowed to have a personal life. ("This vessel  I give, she takes.") But at the same time, he wouldn't trade "his" ship for anything in the world. Alone in an empty room, he whispered to the ship's walls, "Never lose you. Never." Yet the alternate-reality Kirk does lose the Enterprise  much to his chagrin  and the captaincy reverts to Pike. But later, there's an unexpected reprieve: Despite protests from Starfleet Command, Pike asks Kirk to be his first officer. When Kirk hears this news, he's overwhelmed with gratitude. ("I don't know what to say.") He understands that being second-in-command offers the only pathway back to the captain's chair, and he'd rather play second fiddle on the Enterprise than end up in charge of some obscure freighter.
Contributor
Debbie Gilbert

Debbie Gilbert is an award-winning journalist who's been writing for magazines and newspapers since 1988. A Memphis native who grew up near Graceland, she became a Star Trek fan in 1975.

MCU: The Progressively Harder Match The Scene To The Marvel Movie Quiz

10 Subtle Instances Of Method Acting You Didn't Even Know About