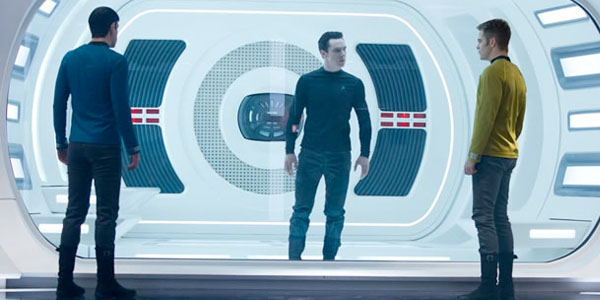 It is hardly a secret that nine minutes of footage for the forthcoming and highly anticipated Star Trek Into Darkness is being shown before IMAX screenings of The Hobbit. WhatCulture was lucky enough to have a preview of the footage this morning at the BFI IMAX in Waterloo and here are all the details you need to know. A quick warning, as you would expect there are a lot of spoilers so if you dont want to know anymore, stop reading now. London, Stardate 2259.55, it begins with Noel Clarke and Kayla Hassan as parents visiting their sick child in the hospital, she looks extremely ill and the parents concern is obvious. Then a mystery man appears behind Clarke and says I can save her. I can save your daughter. The man is Benedict Cumberbatch. Clarke asks him who is, but we dont get an answer, just a slow zoom into Cumberbatchs face.

Next we see the crew of the Enterprise in the midst of a mission on a planet. You would have seen some of the footage in the trailer where Kirk and McCoy are running through the red plants. Well it appears they are being chased by some tribe-like aliens who Kirk and McCoy are leading away from a volcano so that Spock can be lowered into from a Shuttlecraft piloted by Sulu and Uhura. While all this is going on, the Enterprise is sitting submerged off the coast, underwater for some reason. Spock has to set off a device to calm the volcano down because if it erupts, it will destroy the planet. Kirk and McCoy swim to the Enterprise and go to the bridge where Spock, who is now trapped in the volcano, refuses help in case the natives see something they shouldnt and it breaks the Prime Directive of non-interference. Will Kirk save Spock from the volcano or let him die to preserve the Prime Directive? The answer is almost certainly that he will save him but that is the cliff-hanger we are left with at the end of the 9mins of footage.

Afterwards we were treated to a Q&A with Alice Eve who plays Carol Marcus and Benedict Cumberbatch. They talked about how great it was working with JJ Abrams, how much of a visionary he is and how Into Darkness is going to be amazing. Obviously having been briefed on what they can and cant say, they managed to get through the Q&A without revealing any details we dont already know. The nine minutes show that the crew of the Enterprise have gelled and work well together since we last saw them in 2009. And as much as we are led to believe that this film will be a much gloomier Star Trek, the mission they were on seemed quite light hearted and fun. Hopefully this means that Into Darkness will channel more of the tone of the Original Series now that the cast have settled into their individual roles. The identity of the villain may have been leaked as John Harrison but that still might be a red herring. There are enough hints here to make you think that he might be Khan but that probably means he defiantly isnt Khan. So who is he? We dont know, this was as much of a teaser as the teaser trailer was. It gets you interested to watch the film but gives you very little information. If anything, the marketing team should be praised for how they are slowing turning up the heat and generating internet speculation.

People who loved JJ Abrams 2009 Star Trek, they will love this film because the impression it leaves you with is that Into Darkness is going to be action-focused as much as the last film was. Long term Star Trek fans who hated the direction Abrams has taken the franchise and were holding on to hope that this might have more of what could be classed as traditional Star Trek, then Im afraid that the signs are that this film will disappoint you just as much. Anyone who was annoyed by the disregard for basic science, prepare for more of the same. In any case, its too early to make a full judgment but its good that everything we have seen like the Enterprise underwater and Kirk and Bones running off a cliff, happens at the beginning of the film. That means the big set pieces are still a mystery. But for now, we still have as many questions as we did before seeing the footage.
We need more writers about J J Abrams, Noel Clarke, Alice Eve, Benedict Cumberbatch, Star Trek Into Darkness, Kayla Hassan and Star Trek! Get started below...
Contributor
Amarpal Biring
Contributor
Twitter
Facebook