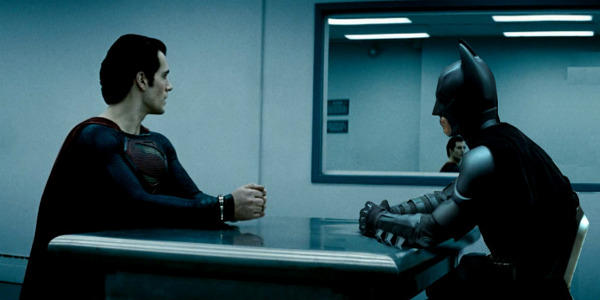 Update: It's official... the movie is happening. Check out the official LOGO HERE Apparently we are set for some majorly epic news to be announced by Warner Bros. at their Comic-Con panel, which is actually taking place right about now in San Diego. The L.A. Times' Hero Complex blog has the jump on the news though and is reporting that the studio has decided that their follow-up film to Man Of Steel is going to be no mere sequel, nor is it to be the lusted after Justice League film. Instead, according to the blog, the studio intends to announce a team-up movie for their next big DC release. This team-up movie will feature Superman and Batman together, à la World's Finest, for release in 2015. Apparently, this is to then lead into a Flash movie in 2016 and then the Justice League movie in 2017. Man Of Steel director Zack Snyder will reunite with writer David S. Goyer, and maybe even producer Christopher Nolan on the ambitious film. Henry Cavill will return as Superman but Christian Bale will not be playing the Dark Knight again and a new Batman will need to be found. This team-up was actually foreshadowed very recently with the DC Comics release of a new Batman/Superman series penned by Greg Pak and illustrated by Jae Lee. This early June release makes a lot more sense now, and it is actually very good. There is no word yet if this series plot will play into this new movie.

This move is rather shocking and it may be due to a few factors. It could be that somes of the negative response towards Man of Steel was taken into account, along with the underwhelming $283 million box office return, or they had a chance of heart and they didn't want to take such a huge JLA gamble yet, instead testing the water with a much less complicated fan favourite team-up. A Batman/Superman movie has been talked about ever since the Christopher Reeve and Michael Keaton days but the last serious attempt was during the post-Batman & Robin days when Wolfgang Petersen (Air Force One, Troy) was to direct a Batman vs Superman movie scripted by Se7en writer Andrew Kevin Walker, but WB wisely canned that project and eventually went with Nolan's reboot. Either way, it is clear that Man of Steel was not meant to be the keystone of the DCU we all thought, rather this World's Finest film will serve as the JLA's foundation. In an interview with indiewire.com last month, Man of Steel writer David Goyer said the following which may outline things a little better:

"In our world, the 'Man of Steel' world, Zack has gone on record saying that were implying there are other superheroes in this world. But I dont know that theyve come forward yet. The idea is that Superman is the first one... There might be people helping people, but not in costumes, and that Superman comes forward and announces himself to the world. In him announcing himself, hes the one that changes things."

So, while Man of Steel was not the "Iron Man model for the DC Cinematic Universe" that we assumed it would be, it did hint that Bruce Wayne is in the same world as Superman, via a Wayne Enterprises Satellite, so that was something. Now, thanks to Nolan/Snyder, we have both of these characters established and I cannot wait to see this film. The date is interesting too, no? It appears that the poster in I am Legend is set to become very prophetic.

What do you guys think? Let me know in the comments below.
Want to write about christian bale, Christopher-Nolan, David-Goyer, Batman, Man Of Steel, Henry Cavill and Man Of Steel 2? Get started below...
Contributor
Darragh O'Connor
Contributor
Twitter