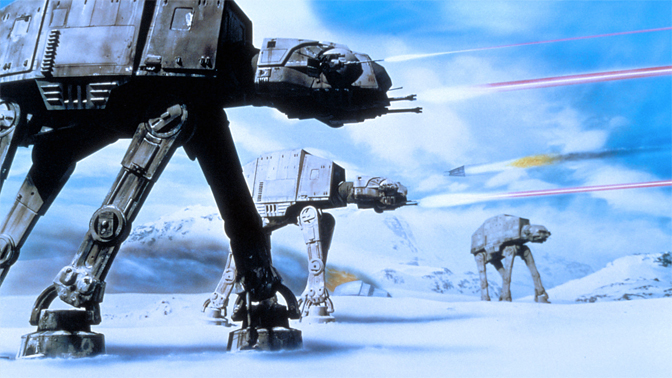 Whilst you're all revisiting George Lucas' three classic films on shiny new Blu-ray, or re-reading Simon Gallagher's utterly fantastic 52 Reasons Why Star Wars Is The Greatest Film of all Time I began to consider the very titular nature of the films themselves... How much warring in the stars is there, really, in Star Wars? Not too much to be honest, sure there's a lovely dogfight (no, not the Amores Perros kind) at the end of A New Hope, some land assault type stuff in Empire, another dogfight in Jedi and the much discussed 'clone wars' in the prequels, but, for the most part, the saga features more 'intimate' character based action than full on intergalatic warfare. Which lead me to thinking about what other wars in the stars, or star wars, are there outside of the Star Wars universe, and which are the best star wars that have nothing to do with Star Wars. Hope you're still with me on this...?!

Ok, so I'm kind of breaking the rules from the off, Futurama is a TV show not a film, as well you know, but this is one of the least tenuous war scenarios I could come across in the realm of sci-fi. Riffing on plenty of war movie cliches and other conflict-based pop culture (most notably M*A*S*H), this episode finds Fry and Bender conscripted into Earthican service in an effort to get a discount on ham flavoured chewing gum. Fearing for their survival Leela joins up in disguise as a man, leading to the episodes finest moments, as Lieutenant Zapp Branigan finds himself increasingly attracted to him/her, only to discover it's Leela after receiving a few kicks and punches; "Oh God, I've never been so happy to be beaten up by a woman." The episode also takes some sly nods towards towards US military tactics with Brannigan summing up the enemy thusly: "We know nothing about them, their language, their history or what they look like. But we can assume this; they stand for everything we don't stand for. Also they told me you guys look like dorks."

Much like Three Amigos or A Bug's Life, Galaxy Quest finds a desperate group recruiting some performers misinterpreted as heroes, in this case the Thermian race have been raised on the 'historical documents' of Galaxy Quest, a cheesey sci-fi TV show. The cast are stuck in an endless cycle of sci-fi conventions and guest appearances and the arrogant star of the show, Jason Nesmith (Tim Allen), is invited by Thermian leader Mathesar to what Jason believes is a staged battle re-enactment. Nesmith's cavalier attitude winds up infuriating evil alien antagonist Sarris and the Thermians call upon the whole crew to help them after the - off-screen - genocide of their entire planet. It's not all out war, if anything Galaxy Quest is closer to a battleship type movie in which the original crew are on a mission, return to find their ship invaded, locked in the brig (or whatever they call it) and then work out how to re-take their vessel and save the day. But it's great to see a movie where two alien races are at war and what humans there are are called in as 'cavalry' and are generally useless but noble. In fact, Alan Rickman's delivery of "By Grabthar's hammer you will be avenged." always sends shivers down my spine. And for anyone wondering why there won't be any Star Trek movies on this list J. J. Abrams sums it up beautifully on the commentary for his own Trek movie, stating that Galaxy Quest is "one of the best Star Trek movies ever made."

Moreso even than Star Wars this film takes one character from a simple life to intergalatic hero, perhaps, for me at least, it is the element of 'the force' and the - with hindsight - destiny of Luke Skywalker that strips his journey of the same level of self-doubt and wide-eyed wonder as that of Alex Rogan (Lance Guest) who is recruited by aliens to help assist in a star war. Plotwise there are a great many similarities between this and Galaxy Quest, including a scene in which the villain - Xur (Norman Snow) - broadcasts the torture and death of a Rylan mole. From there Alex deserts the battle and when he finally returns almost the entire fleet has been wiped out, leaving Alex to act alone to save the galaxy. Alex's adventure is borne of his frustrations with his trailer park upbringing, he fails to be accepted for a school course and feels trapped, only able to vent his angst on the Starfighter arcade machine that is secretly a recruitment tool for the alien forces. It is something of a shame that his heroic journey is such a solitary one, but in that respect it represents the wish fulfillment of every lonely teenager who thinks their destined for greatness. It also makes a great advert for playing video games as an alternative to education! Though worrying suggests that perhaps in the future all Call Of Duty account holders will tick a box agreeing to national service?

"Marines in Spaaaaaaaaaaaaaaaace!" is probably what James Cameron yelled at the pitch meeting for his sequel to Ridley Scott's slow-paced horror-chiller Alien. It's a film that in more ways than just its on-screen content had the WWII attitude of 'The Yanks are coming', with Cameron shooting in the UK and notoriously not getting along with the British crew. Still, the battles on set were all worthwhile to bring one of the best grunt movies around. Regardless of its sci-fi leanings, and like the number one on this list, this movie is a great movie even when you ignore the fact that it's set on a terra formed planet in the outer reaches of the universe and features human hungry xenomorphs as the enemy. Cameron brilliantly transposes the cocky swagger of US Marines into an ever more terrifying and claustrophobic situation, utilising the square-jawed swagger of the gun-toting gang as a perfect backdrop for Ellen Ripley's own doubts about the government's handling of the situation and then - as they are rapidly picked off - to heighten the impossible odds of survival.

Paul Verhoven's film is a brilliant satire of war that is often misinterpreted as a dumb fun blockbuster. Sure it stars the impeccably planed chin of Casper Van Dien and Denise Richards plays a go-getting, career-minded pilot, with able support from as-mad-as-dad Jake Busey and a grizzly robotic armed Michael Ironside, plus there was room in its large heart for Neil Patrick Harris as a psychic intel officer who turns up in borderline gestapo attire for the film's final scene. It is thanks to the casting of the clean cut beautiful - if dramatically stunted - gung-ho actors and Verhoven's own penchant for Hollywood excess that work so excellently in favour of the film's tweaked, blackly comedic messages. The film really comes alive as a spectacle during the visually stunning war scenes, opening in a live broadcast televised night-time assault, featuring a raid on an outpost as thrilling as Zulu's and a bootcamp sequence every bit as great as Full Metal Jacket's, Verhoven utilises war movie cliches to his advantage, playing out expectations as much as he plays with them. The film is buoyed by some of the greatest CG animation there has ever been with the various types of bugs deliciously realised by creature effects designers Phil Tippett and Craig Hayes. For the most part sci-fi hasn't really seemed to attempt too many 'world war' in space, and that's probably down to budgetary issues and audiences generally iffy relationship with science fiction epics. There were a number of films that skirted this list, such as Avatar, Battle Beyond The Stars and Flash Gordon, but they didn't particularly seem 'war-like' enough to cut the mustard, whilst films such as Indepdence Day and Mars Attacks! are too Earth-bound to really feel like an intergalatic space opera. If anything, to me at least, it seems to suggest that there's a huge ammount of breathing space for a filmmaker to come along and make a great epic sci-fi war movie that uses the conventions of say Saving Private Ryan but in space! In fact, that's the pitch, I'm off to Hollywood... see ya...

Owain Paciuszko hasn't written a bio just yet, but if they had... it would appear here.