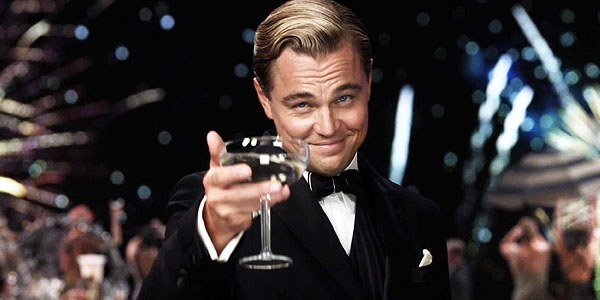 The Great Gatsby is a film so uneven and bizarre that its hard to know where to begin reviewing it. Baz Luhrmanns newest is not the full blown literature-destroying mess that many (myself included) feared it might be; still, it isnt very good. Here is a film that we dont know what to do with; equal parts messy and composed, with some scenes of real beauty and others that make you feel as though someone has trapped you in a metal garbage can full of champagne and flash grenades. If youve read the book, you know how the story goes; if you havent, save yourself the $10 youd spend on movie tickets and head to Amazon.com or your local bookstore.

Outside of a dreadful frame narrative, Luhrmann is mostly faithful to the source material. He also has the benefit of working with an outstanding cast. Leonardo DiCaprios turn as Gatsby is solid, but Carey Mulligans performance as Daisy is the real standout. She has the perfect face and demeanor for the part; all small, brittle confidence and grace, frail and desperate when she needs to be, ritzy and proud when she wants to be. In a film where so many characters get lost under the style and messy storytelling, Mulligan stays afloat like a glowing beacon at the center of the film. On the other end of the spectrum is Tobey Macguire as our narrator (host might be a better word) Nick Carraway. Macguire isnt a bad actor, but his role here is thankless. He spends so much of the film as a dopey-eyed watcher that its hard to access anything through him. Hes also given the unfortunate task of adding voice over narration to large chunks of the film, a constant reminder that while Fitzgeralds prose sounds great on the page, it doesnt always translate as well as spoken dialogue or narration.

As with any of Luhrmanns films, a discussion of his visual style is imperative. The direction of the Great Gatsby isnt as bombastic as it could have been, but the film as a whole still feels woefully unbalanced. It's almost as if Luhrmann is caught between employing his usual, in your face theatrics and holding back out of respect for Fitzgeralds work. The middle ground he tries to establish fails, especially in the first half of the film, which is a stylistic mess. The world that Luhrmann creates feels cartoonish, artificial in a way that undermines the rest of the film. When hes able to calm down and just film the actors doing their job without any hyperactive editing or over-the-top visuals, it actually works about as well as it could have. The problem is that by the time we get to that point, deep in the films second half, weve already lost our ability to invest in the film. And that is the films greatest flaw - the lack of emotion that it stirs in us. The Great Gatsby is a story of passion, desire, lust, betrayal and all of the other emotions we feel when we long for our past. More than its glitz and glamour, more than the parties and the clothes and the roaring 20s dialogue, it is about want. Our want for others, for friendship, for youth, for perceived justice. Yet none of these feelings are present in Luhrmanns film. Instead, we have story so sterile that its almost impossible to feel anything. It takes stabs at emotion towards its final act and actually gets close to creating some, but that only acts as a bitter reminder of what should have been. Do what you want with the style, with the music, with the cast; the soul of the story must survive. Here it has been lost, stripped out and forgotten in favor of a grand spectacle with no heart at the center. A mansion, built to impress and seduce, with nothing living inside it.

The Great Gatsby is out now in the US and in the UK next Friday.
We need more writers about Leonardo-DiCaprio, Tobey Maguire, Carey Mulligan, The Great Gatsby, Baz Luhrmann and Reviews! Get started below...
Contributor
David Braga
Contributor
Twitter

10 Movies Way Freakier Than You Thought

Harry Potter Quiz: Can You Remember These Hogwarts Students?