The end of wizardry and witchcraft is soon upon us, ladies and gentlemen. In two days time, Harry Potter whips out its wand and tries to dazzle us with its magic one final time, before the Sorting Hat is hung up for good. And not to worry, readers, these dreadful Potter Puns are not going to get any better. Not even a little bit. So, lets turn Hermiones Time-Turner back ten years as we go on a little voyage (well ride broomsticks) through the bespectacled wizards tumbling journey through the world of cinema!

Arriving just as the Harry Potter book craze was lifting off, the film adaptation of J.K. Rowling's first novel The Philosphers Stone started what would quickly become one of the biggest movie franchises of all time. As the naïve child faces of Daniel Radcliffe, Rupert Grint and Emma Watson beamed with the energy only children can give, did they really know what they were getting themselves into? Did they know that one day this series would be paying them $15-20 million per film? Most likely not, but theyre all now very well off, so I guess theyve got nothing to complain about.

The first film captured everything about the book  which was essentially aimed at children  with bright colours, whacky costumes and kooky adventures involving giant, three-headed dogs and animate, violent chess pieces. Alan Rickman stole the show as Professor Severus Snape, but theres a lot to be said about the all-star cast  Maggie Smith as Professor Minerva McGonaggal, Robbie Coltrane as Hagrid (Gringrotts, no safer place! Well, cept for Ogwarts), Richard Harris as Albus Dumbledore, and John Hurt cameoing as wand-extraordinaire, Ollivander. Oh, and then there was the infamous scene at the climax of the film where Lord Voldemort came out of the back of Quirrels head. That must have been responsible for more than a few kids wetting the bed!

Not resting on their laurels, Warner Bros. Pictures spat out the sequel, The Chamber of Secrets, to equal, if not greater success. I distinctly remember sitting in my local cinema, waiting for the adverts to finish, and the entire cinema, adults and kids alike, shouting We want Harry! We want Harry! Such is the power of cinema. The Chamber of Secrets kept the same looks of the first film, and gave us the immortal line: Follow the spiders?! Why couldnt it be follow the butterflies?! It also introduced Jason Isaacs as Lucius Malfoy, and the highly underrated Mark Williams as the muggle-loving Mr. Weasley.

And then, in Summer 2004 then came the turning point of the film series, The Prisoner of Azkaban. Different director, Richard Harris died, and was replaced by Michael Gambon (who has done a wonderful job, but I think Harriss interpretation came closer to the Dumbledore of the books), and the film just had a generally darker tone to it. Yes, this is true to the books as well, but I just dont think the mood transition in the cinema was smooth. It was also the point where the special effects were thrown in purely to have special effects  the encounter with the whomping willow in this one certainly springs to mind. And what has always annoyed me about The Prisoner of Azkaban is that all the plot points were glided over, with very little depth to them. Yes, I know, you can only put so much in a film adaption  but heres the example I like to use where the film-makers went wrong: the Maruders Map is a key plot point throughout the film, and yet its never explained that Sirius Black, Remus Lupin, James Potter and Peter Pettigrew were the creators. This leaves the plot-hole of where exactly the map came from in the first place and how Lupin knew how to use it. It would have literally taken a couple of lines to explain! Sorry, thats just the book-fan in me coming out. That said, The Prisoner of Azkaban did have its good points  Gary Oldman as Sirius Black was fantastic, and David Thewlis did a magnificent job as Professor Lupin  exactly how I imagined his character in the books. And it was easily the best directed of the bunch and it's a shame the great Alfonso Cuaron didn't stay with the series for more follow-ups.

Anyway, 2005, Goblet of Fire! Despite being the first of the doorstoppers in the book series, it was the shortest film. Yes, it missed a lot of things out, but it kept enough of the important plot elements to have a clear narrative structure. The highlight of the film for me was David Tennant as the antagonist, the rather creepy Barty Crouch Jr. Ralph Fiennes as the dreaded Lor- err, He Who Must Not Be Named was genuinely scary and Brendon Gleeson as Mad-Eye Moody was fitting.

Imelda Staunton stole the show in 2007's Order of the Pheonix, but honestly, it was not very hard. It was my least favourite of the books  too long, and with a very stagnant plot, and in the film this was magnified a hundredfold. Id describe the film as one-hundred-and-twenty minutes of time-filler material, and ten minutes of action at the end, with a dissatisfying pay-off. I cant even say I enjoyed Helena Bonham Carter as Bellatrix Lestrange that much, as she was fatally underused.

Fast-forward two years later, in 2009, and the Harry Potter franchise continued to plummet creatively. The Half-Blood Prince is my least favourite of the film series, and for good reasons. Whereas the plot was slow in the previous film, in this one  they missed out the plot almost entirely, to instead focusing on a gossipy Oooh, Ron and Hermoine are hitting it off, as are Harry and Ginny, and theres loads of love rivals and stuff! It felt like a chick flick. I have no idea why the film started off with Harry waiting for Dumbledore at a train station. I dont know why he flirted with the café worker, as it added nothing to the plot and wasted precious minutes. The new character, Jim Broadbent as Professor Horace Slughorn, featured relatively little, and the entire premise of the diary of the eponymous Prince was skirted over. The explanation of Horcruxes was brief and confusing, and  to me, the most confusing of all, I had no idea why Luna Lovegood saved Harry on the Hogwarts Express. Youre telling me that she just happened to still be on the train when it was empty, wearing stupid sunglasses that could conveniently see through Invisibility Cloaks?! Did the director even read the book?! Sorry, sorry, Ill try and keep the book-fan in me caged.

Finally, last November, Deathly Hallows: Part 1 all I can say is hallelujah! Splitting the book into two movies, no matter how many people claim to be a money-grabbing scheme, was the best idea the production team had. By having two movies, it gave them the chance to tell the story properly and pace it correctly. It even had time to introduce characters and plots that had thus far been excluded, such as the thief, Mundungus Fletcher, Bill Weasley and Fleur Delacours wedding, and Siriuss mysterious Death Eater brother, Regulus. It was also a pleasure seeing Imelda Staunton return as Dolores Umbridge again, and it seems that theyre finally utilising Bonham Carter to her full potential. The ending of the film, with Lord Voldemort, with his best He-Man impression, acquiring the ultimate wand, really left me wanting more! And more is indeed on the way! I know for a fact, from the trailer alone, that this is going to be a special-effects heavy film, using the effects for the pure novelty of having special effects, as, it seems, is the norm in cinema today, but hey, its the final instalment  of course they were going to go all out! I recently spoke, at the London Film and Comic Convention, to Natalia Tena, who plays Tonks in the movies, about the concluding film. I asked Tena if she was sad that the film series has come to an end, and she replied: No, I think every story needs a good conclusion and this is banging!

So, all in all, its been a very good ten years for the Harry Potter films. Its made several careers, shot Radcliffe, Grint and Watson to undeniable fame, wowed audiences with each chapter of the saga, and brought a little bit of magic to us all. Theres going to be a very big hole in the hearts of the public once Harry Potter is over  it truly will be the end of an era. But lets not weep uncontrollably just yet  weve still got another two hours of witchcraft and wizardry to go, and personally, Im very much looking forward to a duel between two certain witches! WhatCulture! NEWS FLASH -- Didn't you hear we loved the new Harry Potter movie? Shaun's review of the film is HERE. 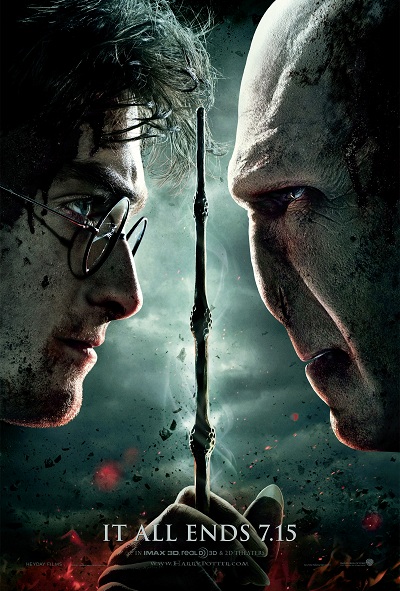 Half-man, half-tree and with a penchant for hats, Josh spends his free time writing opinionated rants on the internet, rocking out on guitar in desolate bars to crowds reaching as much as twelve and a half people, and drinking endless cups of tea to sustain himself. His favourite colour is purple.