Horror movies have a certain rhythm, a vocabulary that over the years we have grown accustomed to seeing. Typically, the scariest moments are telegraphed by the soundtrack; loud noises are utilized to make horrific images more shocking; and you just know that the person who separated from the group to traverse the dark hallway alone is not going to have an easy time. And in recent years, some movies have become more obsessed with getting people to jump than inspiring actual feelings of dread. Whats interesting about The Innkeepers is that it is not a horror film, at least it doesnt seem like it for a while. And I get the feeling thats exactly how writer/director Ti West wants it. The Innkeepers is about two hapless employees of the Yankee Pedlar Inn, a Connecticut based hotel with a dark history, on the final weekend before it closes. Claire (Sara Paxton) is the younger and more earnest of the two and Luke (Pat Healy) is an older Geek type whose encounters with ghosts at odd hours in the hotel inspired the creation of a dinky web page and some hastily purchased EVP equipment. It sounds like exactly the type of conventional horror movie that fades from memory the moment its over, but West definitely approaches the material from a fresh perspective. The innovative method the movie uses involves a lot of humor. So much humor that for the first half hour of the movie, it feels as if were watching Clerks 3. (That is, if Clerks 3 was made without any input from Kevin Smith and went straight to DVD.) Claire and Luke goof around, discuss the despair of the in between stage of adulthood, insult the customers and tell a lot of jokes. (All of the best lines go to Luke. Pat Healy has some good comic timing.) In fact, the themes of time marching on and quarter life crises are probably the best parts of the movie and could easily be the start of a pretty good coming-of-age film. These early scenes lull you into a false sense of security and several fake out scares are worked in. The score by Jeff Grace compliments things well as the music shifts from whimsical to spooky and back again. What ends up happening is, as the movie moves into the second act, every potential scary scene could either be legitimate or another misdirection, which creates anxiety in the audience. One scene in particular leads us by the nose into expecting another prank and then stabs right in the gut while twisting the knife. The movie telegraphs a punch and then leans in for a kiss while you cower only to later gently stroke your thigh before kicking you in the nuts. 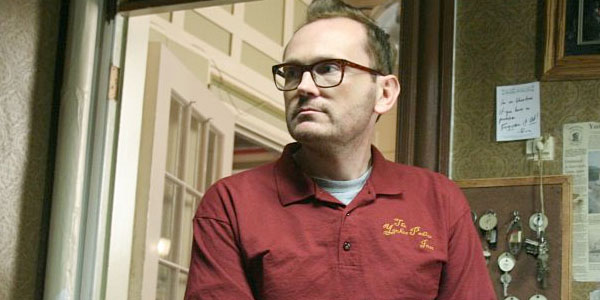 Ti West is also interested in subverting the tropes of the horror genre. Claire and Luke are not searching for ghosts because they want to prove or disprove their existence; theyre not even the type of people who really believe in the paranormal. They do it because theyre bored, because they have nothing better to do and because definitive proof of the hotels haunting would be a hassle free path to notoriety. Later on, when things do start to get crazy, Luke is genre savvy enough to trust his instincts and actually leave the hotel immediately. There are some portions of the movie that occur seemingly for no reason and have absolutely no further bearing on the plot. A conversation with a barista at the high-end coffee shop down the block offers nothing but an semi-amusing aside. An over-protective mother and her whiny child appear in several early scenes, only to just leave the hotel later on, not because of the possibility of ghosts, but because Sara and Luke are just about the worst employees ever. Perhaps West added them because we have been trained to expect side characters to turn up dead when shit hits the fan, but if theyre only there to mess with us, it at least shouldnt FEEL like theyre there just to mess with us. The last fifteen minutes are the most like a traditional horror movie and not coincidentally the worst portion of the film. Its at this point that Claire abandons all of her previous reasonable behavior and just starts acting like a typical scream queen idiot, going into dark places alone to investigate strange noises and disobeying such simple commands as stay here until I come back.

In fact, whenever the movie tries to be a traditional horror movie, it suffers. A brief and cliché explanation is given for the haunting involving Madeline O Malley, who killed herself after being left at the alter on her wedding day, but its never fully investigated and the results are confusing. There is a conclusion to her story, but it doesnt appear to make sense. We never get the moment, like in The Ring when we learn why Samara is the way she is. One can attempt to interpret the events and connect the dots, but the movie is of very little assistance. The dissonance between the first and second halves cause problems with the films climax as it doesnt feel like the plot has been boiling the whole time and finally erupted. Its more like the movie remembered it was supposed to be scary and poured it all on at the end. I commend West for his attempts to play with the tropes of the horror genre, and parts of the movie are quite enjoyable, but it comes off as a film about horror movies rather than a horror movie itself. If you go into this movie expecting a straight forward scream fest, the opening will feel silly and corny and you may want to walk away from it, but if you stick with, when its over youll realize that was the best part of the whole thing. Its a decent enough experience, but hardcore fans of the horror genre should probably steer clear.

The Innkeepers will be available On Demand December 30 and in theaters February 3, 2012.
Want to write about The Innkeepers, Sara Paxton, Ti West, Pat Healy, Madeline O’ Malley and Reviews? Get started below...
Contributor
Trevor Gentry-Birnbaum

Trevor Gentry-Birnbaum spends most of his time sitting around and thinking about things that don't matter.

10 Movies That WASTED Villains From Their Source Material

8 MCU Characters Who Deserve Their Own Movie