Something startles the dusty crowd, and they look to the rooftops where a masked man astride a white stallion imposingly stands. The William Tell Overture triumphantly storms in on the soundtrack, and like a match striking a fuse, ignites the action onscreen. What follows is awash in shimmering, glorious insanity that feels ported directly from the adolescent daydreams of an Eisenhower-era pre-teen boy. Twin trains hurtle down parallel tracks as outlaws, marshals, cavalrymen and railroad barons engage in gun slinging across a yawning ravine. Meanwhile, the titular hero rides Silver across the boxcars, his compatriot Tonto crawling up improbable ladders as if he were Buster Keaton or Harold Lloyd. The scene keeps going and going, upping the ante at every breathless turn and executed with the frantic, captivating energy of a silent-era madman. Anyone worried that modern sensibilities would sink the Lone Ranger can be relieved; this is classic pulp imagined and upgraded with modern bells and whistles but retaining its own singular, beating heart. Alas, this is the final twenty minutes of Gore Verbinskis The Lone Ranger, coming after nearly two hours of schizophrenic, bloated blockbuster that seems ashamed of its iconic centerpiece. Despite that conclusion, that frustrates with the possibility of what might have been, this new take on a staple of the golden age of radio and television only reinforces the idea that studios should not touch properties they dont understand. Hungry for money and following the lead of Depp, probably the only performer who could pull this sort of Pied Piper scheme, Paramount invested in a character who hasnt had any kind of consistent popularity since JFK was in office. Instead of embracing that whiz-bang, earnest adventure that defined the Clayton Moore erain much the way that Martin Campbells Mask of Zorro didVerbinski and his posse of screenwriters (Justin Hathe, Terry Rossio, Ted Elliot) try to re-imagine and update the Ranger, Tonto and their place in history while holding tightly to the kitschy imagery associated with the title. 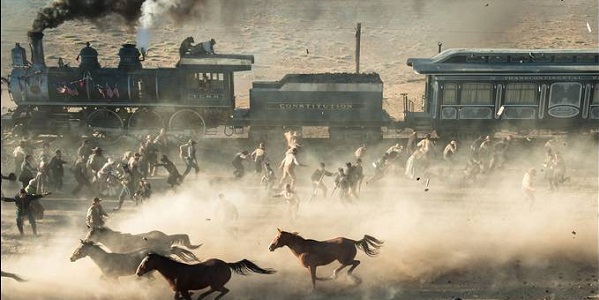 Is it any wonder that the resulting movie is tonally all-over-the-map? Armie Hammer has all the right qualities to play John Reid, the Rangers justice-seeking alter ego, but the script clips his wings by making this incarnation a bumbling, neer-do-well who must rise from his dead brothers shadow and avenge his death, leaping at any opportunity but never adopting a clear sense of moral purpose. Until the climax, this Reid bears more in common with his great nephew Britts interpretation in Seth Rogens The Green Hornet; hes an abandoned man-child who must lean upon his harried sidekick on his way to competency. Without a confident backbone, Reid and the movie hes in never feel grounded. Although its clear all of this has been sacrificed so Tonto can become the focal point of the enterprise, the creative team never properly prepares for this transference and it leaves a big, hero-shaped hole in the middle of the film. Depp playing a Comanche tracker on a quest of sure and simple revenge is the kind of thing that sounds so off-kilter that it might actually succeed. Throw in some absolutely howling costume work that openly references the art piece I Am Crow and a performance that mingles real, social outrage with Red-Face pantomime and you get something that, while defiantly bizarre, ends up repelling instead of enticing. Depp delivers a real performance and struggles to unite the disparate pieces of Tontos fractured soul, but mostly comes off like Captain Jack Sparrow if he had washed up on Neverlands shores and joined Tiger Lilly and company. The decision to make Tontos mystical pronouncements and belief in a supernatural realm the delusions of a wounded mind also neuters the atmosphere. William Fichtners disfigured, leering varmint Bruce Cavendish, responsible for the personal pain of both protagonists, is one of the causalities of this approach; his penchant for eating human hearts matches him up with Tontos assurance that hes a demon, but makes little sense in the overall context of the story. Many audience members wont be able to look beyond the Injun stereotype, no matter how much fantasy and subversion is ladled on top. The bookends that feature Depp narrating in creepy aged make-up do the character no extra favors.

On the upside, Verbinski brings his adept eye for compositions and unique aesthetic flourishes to the film, and if The Lone Ranger is a sagging, neurotic ball of mixed messages as a narrative, it fares better on a visual/sensory level. The cinematography is expansive, grand and burnished with a weary, lived-in quality that exists in a limbo between matinee fever dreams and haunted, gritty reality. Hans Zimmers score is one of the better showings of the summer soundscape, and merges high adventure and whimsy with a confidence lacking elsewhere. The action scenes are spectacular and, by the end, effective on an emotional level too. The special effects cannot be argued against, except to wonder why they need be employed to such diminishing returns. The cast around the leads is full of recognizable, hard-working faces but they come off like circus attractions instead of people. While The Lone Ranger avoids being as bad as other ill-advised western popcorn flicks like Wild, Wild West or Jonah Hex, it never does proper justice, pardon the pun, to its source material until it reaches that delirious finale. In the end, its another unfortunate example of the inconsistency of this summers offerings, tempting critics to function like travel agents drafting up itineraries for theater excursions. Dont tell them I said so, but if you hit up the first forty-five minutes of Man of Steel, drop in for about ten each of White House Down and The Heat, see the last twenty of Monsters University and finish up on the finale of The Lone Ranger, youll have seen a good movie and one only slightly more erratic then watching any of them from beginning to end.

The Lone Ranger is out now in the US and opens in the UK on August 9th.
Want to write about johnny depp, Tom Wilkinson, Gore-Verbinski, Armie-Hammer, Hans Zimmer, The Lone Ranger, Terry Rossio, Ted Elliott, William Fichtner, Reviews and Justin Hathe? Get started below...
Contributor
Nathan Bartlebaugh
Contributor
Twitter