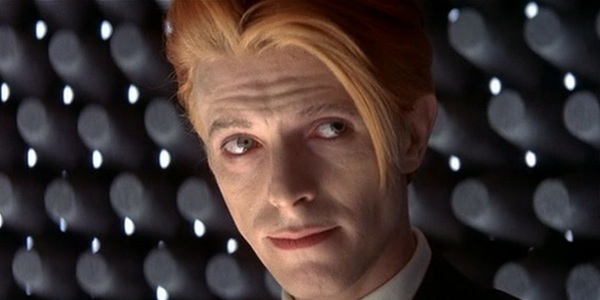 For all of the outrageous vanity projects starring musicians, it is Nicolas Roeg who, on two occasions, made genuine assets out of veritable rock stars  first, Mick Jagger in his beguiling debut film Performance, and then David Bowie in the cult sci-fi The Man Who Fell to Earth. Roegs film is a sci-fi of mood and atmosphere rather than narrative thrust and surprise; John Phillips and Stomu Yamashtas airy score combines with a dazzling visual sensibility to by turns unsettle, amuse, mystify and frustrate as David Bowies alien, Thomas Newton, arrives on Earth in search of water. The Man Who Fell to Earth is uniformly odd, but also compelling in large part because Newton is so far away from the prototypical little green man we expect to be visiting Earth. Not only a humanoid, he is also extremely well-prepared, utilising his advanced alien technology to secure patents worth hundreds of millions of dollars, all in the aim of saving his dried-up home planet. This is no simple alien invasion story; it is more contemplative, and even when we dont quite know what Newton is planning, his steadfast defiance of the alien stereotype keeps him intriguing.

Roeg meanwhile takes his peculiar directorial style to new heights with elliptical editing techniques, juxtaposing the distinctly human sexual mores of college professor Dr. Bryce (Rip Torn) with Newtons mechanical, stone-cold empire building, setting them on a collision course before they even meet. The surreal imagery, from the wall of televisions in Newtons apartment to the flashes of his desolate homeworld, become more frequent as the film progresses. Even though it sometimes feels arrhythmic of the typical, tried and tested film form, the visual sumptuousness, alongside Bowies unexpectedly strong performance, is the glue that holds it together. We are slowly bled insights throughout the overlong 139-minute runtime, beginning with a brief glimpse at Newtons wedding band, while periodically cutting back to the deteriorating state of his family, who is dying of thirst back home. Bowie carries the mystique with smoldering glances and admirable restraint, all the more impressive given reports that he was coked up to his eyeballs on a daily basis. The pace, however, becomes slow and meandering by mid-point, as the sci-fi premise takes something of a backseat to Newtons own love story with Earthling Mary-Lou (Candy Clark). What remains strong is its central theme, how an outsider could be slowly polluted by our humanist values and pursuits, chiefly a capitalist agenda. We observe Newton addicted to alcohol and pervasive television, evidently transforming him into something even Mary-Lou didnt bargain on.

Typical sci-fi exposition only rears its head in the second half, as Thomas goal is exposed and his feelings of alienation become more evident, somewhat justifying Roegs eccentric, idiosyncratic direction up to that point. As the more sinister nature of the alien visitor narrative unfurls later on, Roeg employs phantasmagorical visuals interspersed with kinky, violent sex to generate a discomfiting feeling in the viewer. Bowie, when stripped down to alien form, is quite a sight indeed. This is sort of the problem with the film, also, as it very nearly falls apart whenever Bowie isnt on-screen, which thankfully isnt very often. The picture sags considerably when deferring to the peripheral bureaucratic characters and their subplots, as the corporate side-story is as dull as a bag of bones. Even by films end, the more curious story elements feel a little exhausting, owing more to Roegs painstaking pacing than anything, as he trundles us along to a suitably downbeat ending which nevertheless sees Bowie on top form. It isnt so simply an issue of style-over-substance for Roegs film, because it has plenty of substance, but buries it beneath countless leaden scenes, and a patently uneven command of the central narrative. Ultimately, it is brimming with smart ideas  not to mention a stellar turn from Bowie  but roughly-hewn and completely excessive.

8 Horror Movies Built On A Lie

10 Incredible Movie Scenes You Never Got To See

10 Time Travel Movies To See Before You Die