For a man who has had such an amazing career and with such an interesting background and journey on his way to becoming so accomplished within his profession, I can barely sit and watch an interview with Robert De Niro for more than a few minutes. Its usually a series of mumbles and maybes, a few shrugs and a nonchalant expression which is at odds with eyes that Meryl Streep has described as containing 'huge emotions right under the surface.' That may be so, but to hear him speak when out of character he sounds like a man whose never broadened his horizons further than his home town. Though he seems to have opened up more in the last decade or so, for most of his career De Niro has been representative of the type of actor whose personality only seems to exist when the camera is watching him. But its not just De Niro who comes to life in front of the camera; the camera also has a very special relationship with him. A director once commented on this in amazement when he described how this otherwise self-conscious and underwhelming presence would just transform into something on screen that you couldnt take your eyes off. When acting De Niro found that the cure for his shyness was to try and escape into his performance. This way he could completely immerse himself into his roles to the extent that he simply wasnt De Niro anymore. As long as he was the character and not himself then he had nothing to be nervous about. For the most part it was an emotional transformation, learning Sicilian for his role in The Godfather Part II or driving a cab around New York and staying in role on the set of Taxi Driver. When preparing for his role in Raging Bull however De Niro took his methods of madness to a whole new physical dimension in one of the most daring performances of all time. Today The Other Side of Madness explores his revolutionary physical preparation: FROM CHAMP TO CHUMP: DE NIRO PUTS HIS BODY ON THE LINE FOR RAGING BULL Though it may appear strange in hindsight Raging Bull did not begin as a Martin Scorsese project. What I mean by this is that it was not a film that he was particularly desperate to make which for such a passionate filmmaker appears strange in that he would ever agree to do something he wasnt initially one hundred and ten percent excited about. When you take into consideration the boxing subject matter however and then recall that the reason Martin become so addicted to films in the first place was due to the fact that his asthma prevented him from playing sports, you can get a greater appreciation for why this wasnt a film idea that necessarily spoke to him. On the other hand De Niro could not have been more eager to start rehearsing his role for the legendarily tough but self-destructive boxer Jake La Motta. Here was a character with an intense undercurrent of deep internal rage which was arguably De Niro's greatest strength as an on-screen performer, someone with strange enigmatic qualities which the actor once more possessed and a role which required him to make a monumental physical transformation not once.. but twice. Reading the script, he must really have been like a kid in a candy store. It was no surprise then that it was De Niro's passion that was able to help convince Martin that there was a story here worth telling. And as if there was any other doubt that Bobby was born to play this role the conviction lay in his own characters line Im the best and I can take it more than anybody. The actor could indeed take it more than anybody and he set out to prove it from the off. From the start Bob knew that he could not simply play Jake La Motta, he very much had to become as much like the boxer as was humanly possible. The role had to dominate his life, his existence  he had to start thinking and breathing like the man he was playing. He perhaps surprised everyone by just how close he came.

The process began with hours and hours of rounds in the boxing ring. Working intensely with the real La Motta would no doubt have been a dream come true for the actor as here was a man who wouldnt let De Niro compromise anything he would demand for the actor to treat the sport and his training with the utmost seriousness. The damage of their sparring sessions showed as much when Jake later commented that both men ended up with black eyes and that his upper teeth caps were busted. Whether or not La Mottas other claim that hed rate De Niro as one of the top twenty middleweights in the world was exaggerated or not, the fact was that the intense in ring action had certainly made the actor look the part and as you can see from the picture below the likeness between La Motta in his prime and the man playing him was quite eery: Aside from De Niro more or less transforming into his character, another thing that really worked in the films favour was Scorsese himself. Though he had no real passion for boxing, the director had become aware of the poetry of the story, the allure behind this masochistic brute who fought as if his very life depended on it and who didnt seem to care if he did indeed die doing the rounds. Upon unenthusiastic but essential viewings of live boxing matches Scorsese also gained a greater perspective as to just how barbaric and breathless the sport was and as such a far more authentic approach was taken to filming. Instead of keeping the audiences distance from the ring as most previous films on the subject had taken to doing, Scorsese instead pushed the camera right into the heart of the action and made everyone hear, breathe and taste the adrenalin pumping massacre that takes place inside the ropes. Blood flying into the crowd and pouring from the fighters wounds, the constant foul sweat and bone-crushing sound of fighters pounding each other..... the stylised but unglamurous approach taken by Marty that when combined with De Niros authentic performance made for perhaps the finest sports sequences ever crafted. Having put on the muscle to play Jake, the second part of De Niros job was to fulfil the tragic element of the story and begin to pile on the pounds. To do this he literally ate his way around Italy with a routine that he describes below: 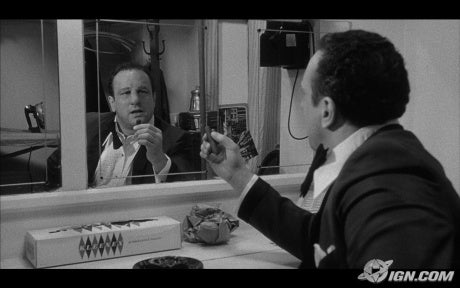 Having ballooned from a super trim one hundred and forty pounds to two hundred and fifteen pounds in such a short space of time, the impact was all too clear. The actor had problems breathing and apparently during the last two weeks of the shoot had trouble tying to tie his shoelaces together. Even his stepdaughter treated him with disgust and would refuse to let any of her friends meet him even in his own home. He had however proven once again the impact of the method not just on a physical scale but an emotional one as well having gone from portaying a tough, chiseled figure who you really despise to a character whom you feel deeply sorry for as in the end he resembles little more than an overweight sorry-eyed joker who has to resort to stupid one liners in dinghy clubs. The manner in which De Niro carried these two contrasting performances demonstrating not just the change in weight but also the vocal and emotional alterations was nothing short of remarkable. But whilst the end may have justified the means for the performance, for the man behind the mask it was perhaps a different story. Physically De Niro found it immensely difficult to lose the weight that he had gained and emotionally he slunk into a great depressive mode from having gone overboard in trying to delve into his characters psyche. Still though nothing like an Academy Award and lifelong praise for a screen performance to make someone feel better about themselves is there? P.S. If you are going to pile on the pounds for a performance, please make sure that youre being paid first. Thanks for reading and I hope you enjoyed this week's article. As we are approaching the Oscars Season I think it would be appropriate for next week's feature to document the madness behind one of the most compelling making of stories of all time surrounding a little known Best Picture winner called The Godfather. It's surely an offer you can't refuse.
We need more writers about Robert De Niro and The Other Side of Madness! Get started below...
Contributor
Laurent Kelly

8 Most Disappointing Movie Sequels & Remakes Of 2021

10 Small Details You Missed In Tenet