He is the man behind some of the most jaw dropping images ever committed to celluloid. A spaceship travelling through orbit to the evocative sound of the blue Danube, a criminals eyes peeled wide open as he is forced to watch unspeakable violence; a boy on his toy bike pedalling through a large, haunted house.

Whilst Stanley Kubrick might make such sequences look easy - the reality however couldnt be further from the truth. It is actually the result of hours of meticulous planning and visionary thinking and pushed to the limit by an emotionally and physically drained cast and crew during it's execution.

To understand Kubrick is to understand a man who lived and breathed his craft. It is not something which I can relate to myself. Whilst I much enjoyed writing my own feature film screenplay I was still always conscious of it being work. I could not immerse myself into the writing to the stage where it became as natural a process as other day to day activities. Kubrick, on the other hand toiled away for months on end for his work hence the reason why his lengthy career only spawned thirteen films. How easy must it have been to give up during some of those famously difficult shoots? How easy must it have been to lose passion for his projects? It didnt matter. Kubrick was a man who worked with the backing of a studio system but who did not cater to any studio system. He made films how he wanted to make them, regardless of who he offended doing it. Just ask Stephen King. He could infact be described as the James Joyce of the filmic world, a revolutionary, filmmaker renowned for his quest for perfectionism. It was often this quest which gave the director his mad reputation. Although he never reached the comically absurd heights of Werner Herzog as explored in last weeks article, the making of Kubricks films are almost as interesting and intense as the films themselves. Today we are going to look at one extraordinary example in particular which is: TAKE 127: STANLEY KUBRICK, SHELLEY DUVALL AND THE SHINING EXPERIENCE To watch the "The Making of the Shining feature" that comes with the DVD (which I highly recommend you do so) it is very clear to see the contrasting relationships between the director and lead star Jack Nicholson who appear to connect on a deep emotional and professional level and the cold contact between Kubrick and lead actress Shelley Duvall which is more reminiscent of a bullying professor and his overemotional student. Kubrick is belittling, patronising and at times downright rude to Duvall and watching the backstage footage you really feel for her. She appears to be trying her utmost and that mean bastard director just continues to insult her. This is how it all appears at first glance. As the documentary progresses however what gradually unravels is the finely crafted method behind Kubricks actions: Playing a very tough role which requires someone to reach tremendous levels of paranoia is a daunting task for Shelley or indeed another actress or actor to handle. What becomes apparent then is that Kubrick is very subtly mirroring the treatment Shelley receives at the hands of Jacks character in the film within their real life interactions. Just as Jack begins to act curt with her on screen, Kubrick applies the same method in directing her whilst gradually becoming more and more verbally sharp and aggressive. The process is such that Shelley begins to face a similar paranoia behind the scenes as she does when the camera is rolling thus helping to make her performance appear more authentic. In the making of documentary Shelley reflects on this process herself whilst she recalls that:

For a person so charming and so likeable, indeed loveable he can do some pretty cruel things when youre filming because it seems to me at times that the end justified the means."

I've highlighted the end of this quote because I feel it perfectly sums up the Stanley Kubrick experience; it's hard work and draining and at times you may hate it but the end result is always worthwhile and fascinating. This process is never more apparent than in the scene where Shelleys character Wendy is swinging a bat in front of her increasingly mad husband whilst moving backwards up some stairs; a sequence which reportedly took 127 takes to complete and in the process broke the record for the amount of takes needed for a single shot. 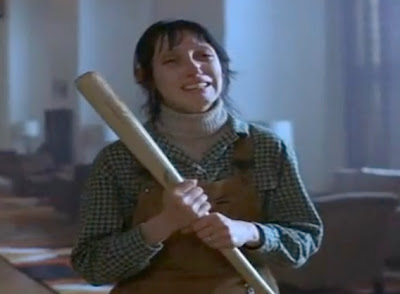 The scene itself is very chilling and paced to perfection. You get a real sense of a woman on the edge in Shelleys performance within that sequence. With her hands shaking on the bat and her piercing, blood shattered eyes wide open in terror she appears to have lost herself in the moment and as such she is being rather than simply acting. The very thing that Kubrick wanted from her performance all along. So am I fully behind Kubricks behaviour. No, not entirely. It must have been quite an ordeal for Shelley not only suffering the cold direction from Kubrick but also the incredibly cold conditions on set and thus it was not a surprise to hear that she suffered various panic attacks throughout the course of the shoot. And had she not maintained that aspect of professional respect towards Kubrick she might have been inclined to just call it a day which would no doubt have left the director in quite a quandary. Then however I manage to place it all into perspective. She is essentially an actress making a small fortune for this production. Ive worked on seventy hour film sets before on very little pay with even less gratitude shown for my efforts. The mind boggles however as to what I would suffer through for my art if you add a few noughts to the end of my pay cheque. Did so many of the scenes really need so many takes. No, probably not and there might well be a case of Kubrick indulging himself slightly and a great a director Kubrick was he was also at times a highly indulgent filmmaker. I do however respect the madness that helped to makeThe Shining one of the essential horror films to any serious film buffs collection. And whilst Duvall claimed that she would never want to go through such a shoot again she also stated in the making of feature that she "wouldn't change the experience again" and that it was "such an intense experience that it makes you smarter." Thanks, she adds to Stanley Kubrick. Thanks once again for reading and please return next week when this feature will be looking at the beyond mad methods behind one of the greatest screen performances of all time: Robert De Niro as Jake La Motta in Raging Bull. P.S. Demanding 127 takes on your own independent film set may very well leave you deserted with a camera on the side of the road.
Want to write about Stanley Kubrick, jack-nicholson and The Other Side of Madness? Get started below...
Contributor
Laurent Kelly