Today the legacy ofThe Godfather is so iconic and so seeped into popular culture that is hard to ever visualise a time of struggle with the usual deep stress and paranoia that comes with making a high pressured studio feature film. The picture has an effortless quality to it which gives the impression that it was a classic that just happened as if by fate but the reality couldnt be further from the truth. In another world away from the references in The Simpsons and The Sopranos and the various Tom HanksGodfather parties there lies an epic making of which is perhaps more dramatic and fascinating than the content of the film itself. A story of death threats, mafia influence, studio paranoia and one of the key filmmakers of the seventies being constantly threatened to be replaced. If you were to tell those worried faces now of the legendary status that the film went on to achieve, they would probably be surprised just to hear that the film was ever made at all. In this first of a two part special The Other Side of Madness explores the chaotic background behind one of the most acclaimed films of all time: THE MAKERS BEHIND THE GODFATHER AND THE MAFIA'S OFFER THEY COULDN'T REFUSE It began in gangster laden gambling halls. Mario Puzo, a strikingly short and chubby Italian man with sharp eyes was a writer with little fanfare who was trying to construct research in order to develop a fully fledged story around a cameo character from one of his earlier novels  that character being none other than Don Vito Corleone. Positioning himself by the roulette wheel for hours on end he would talk to various mafia types who had no problem feeding him answers so long as he continued to lay down his bets. Both sides would no doubt have enjoyed the process. Puzo after all hated the hermit like existence of the writer and so would have rejoiced within the active research and meanwhile gangsters; notorious for their vanity  probably delighted in boasting about their various tales. Not only that but Puzo was given the best possible source for his material  he was able to see first hand how the gangsters walked, talked and really breathed and through this enviable method of research he found the story that he wanted to tell. Some time later that story would hit bookshelves as The Godfather and before too long it was an international bestseller that Paramount wanted to turn into a film. Paramount did however have very clear ideas about how they wanted the film to be made. Through their somewhat rose tinted vision of proceedings they anticipated filming The Godfather on a shoestring budget whilst relying on the book's loyal readers to bring in the major bucks. For this reason they brought in relatively unaccomplished director Francis Ford Coppola who was nevertheless an established screenwriter having won the Academy Award Screenplay for the film Patton and the man whom studios were assured would be the right man to both commercially and artistically handle the project. The studio would actually end up with an endless supply of problems with Coppola but they were on hold for the time being because at current they had an endless supply of problems in dealing with the real life Mafia. The protests were fast and fierce. The Italian -American Civil Right League headed by Joseph Colombo  the charismatic don of one of New Yorks five mafia families began a rally in Madison Square Garden that raised $600,000 dollars in order to halt the production on the grounds that it would become offensive to Italian Americans. If this wasnt bad enough it was actually just the beginning of a laborous battle. Soon afterwards bomb threats caused Paramounts offices in Manhattan to be evacuated and the films producer Al Ruddy was informed that his car was being tailed. When he switched vehicles with his secretary she parked the car in front of her house and the next morning woke up to find that it had been riddled with bullets. As far as the Mafia were concerned this was all just a friendly warning and the threats would indeed get far more severe. 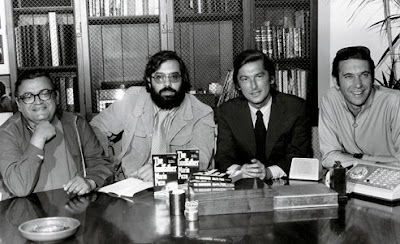 Whilst the actors were becoming acquainted with one another on set as they prepared for their roles during rehearsals a very real drama was unravelling behind the scenes. After the bomb scares and the break ins the Italian-American Civil Rights League took their protests to the next level and began threatening to shut down essential parts of the crew which included truckers and drivers. Vanity Fair magazine details perhaps the most chilling threat that was made to producer Robert Evans whilst he was staying at a hotel with his girlfriend; actress Ali Mcgraw and his young son Joshua:

Evans picked up the phone and heard a voice that, as he wrote in The Kid Stays in the Picture, made John Gotti sound like a soprano. The message: Take some advice. We dont want to break your pretty face, hurt your newborn. Get the fuck outta town. Dont shoot no movie about the family here. Got it?

This for Evans was understandably too much to handle and so he persuaded his smooth talking co-producer Al Ruddy to pay a visit to Joseph Colombo in order to straighten things out. If these events had indeed been part of a film then the second act turning point was right round the corner. Ruddy met with 50-60 members of the Civil Rights League who were apparently dressed immacuately in order to step away from their Mafia stereotypes. Ruddy proceeded to talk about about how the script dealt in well rounded characters with fair representations, after all he insisted the script featured a "corrupt Irish cop" and a "corrupt Jewish producer". He went on to explain that the Italians were not being singled out in anyway. What followed next was pure comedy. Joe Colombo and two of his loyal henchman arrived to meet Ruddy the next day in order to give the one hundred and fifty five page script a thorough read-through. Joe put on his glasses and opened the first page and then pretty much instantaneously glanced up and asked What does this mean  FADE IN! Ruddy knew right then and there that Colombo was probably not up to the task of reading past the first page let alone the entire copy. Sure enough the script was passed around to the henchmen neither of whom had any interest either in trying to get there head around a professional screenplay. In the end however it turned out it didnt matter. Colombo and the boys trusted Ruddy and they made a deal that The Godfather could proceed filming provided that the word 'Mafia' was released from the script. Mafia was a dirty word and being a coldblooded and violent Civil Rights League they naturally wanted it removed. Al, perhaps not realising the spiral of events that would unfold agreed that the single use of the word mafia in the screenplay would be taken out. After all what harm could this really cause? Well now that you ask, the harm it caused was for the man to be pretty much fired on the spot by the raving executives at Paramount. Al Ruddy had agreed to an inpromptu press conference with Joe Columbo announcing the peace deal and the press instantly had a field day expressing hyperbole of the highest magnitude. The headlines screamed that Hollywood was now ruled by the Mafia and naturally this caused Paramount to go ballistic. Charlie Bludhorn told Al Ruddy that he had wrecked his company and went on a rant during which Ruddy no doubt considered some of the implications of the deal he had agreed to: *He had held a major press conference on his own terms without the consent of the studio. *He had made promises and cut deals with the mob. (Even if they did take pride in their civil rights.) *Paramount had cast a dark shadow over the Hollywood system and this was not good news for their investors Gulf and Westerns Stock for example had dropped two and a half points in a single morning. Ultimately the press died down however and now with the consent of the Mafia... sorry the American-Italian Civil Rights League the filming could go forth. Ruddy was brought back in because he was trusted and well liked by the Civil Rights League and since the film was now dependent on the group in order for shooting to begin they pretty much couldn't go on without him. And subsequently Coppolas vision of filming in Little Italy could finally commence. But if he thought that it was a steep incline just trying to begin shooting he had another mountain to climb when it came to actually making the film. From repeatedly being undermined and threatened to be replaced to concerns about Short Ass Al Pacino to the disgruntled feedback at some of the early dailies, the rollercoaster ride was about to accelerate even harder.