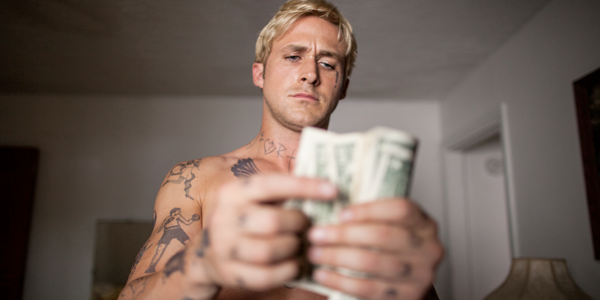 Warning: spoilers ahead. All things told, this film is worth 140 minutes of your life, so see it before you read this, or read ahead if you don't really care about spoilers (spoiling some plot twists won't damage the enjoyability of this particular film). Derek Cianfrance, as a director, is close to the heights of his trade; Derek Cianfrance, as a screenwriter (at least in this genre), has a ways to go before he gets there. Cianfrance wrote and directed his latest film, The Place Beyond the Pines, and it's a fine film only as a sum of its excellent cinematography and its clumsy script and plot. The story is told in three acts: the first involves Ryan Gosling as a motorcycle stuntman turned bank robber, the second involves Bradley Cooper as he fights his way through a corrupt Schenectady Police Department, and finally the third involves the consequences of the elder generations' actions on their sons. The film begins with a long take, tracking Gosling from behind as he makes his way across a county fair to participate in a three man motorcycle spectacle. He's about to move on to the next town with his troupe of stuntmen and carnies when Eva Mendes stops by to say hello; eventually he finds out that he fathered her one year old son and decides to quit his job and play a part in his son's life. The problem of course is that he is jobless, so in search of money he eventually puts his motorcycle skills to use and begins to rob banks with the help of the man who is putting him up (Ben Mendelsohn) in Schenectady. The visuals in this act alone justify seeing the movie. The robbery and escape sequences are as highly controlled chaos as I can remember seeing in a film. Cianfrance keeps the shots tight, creating a visually gripping blend of claustrophobia and frenzied motion. As enjoyable as these scenes are, they aren't the real thrust of the film. Gosling coming to grips with fatherhood is the real propellor here. He's asked to do a little more in this film than he was in Drive (the natural comparison for him in this role), and handles his role very well. A quick aside on Gosling: as much as I liked Drive and even , Nicolas Winding Refn never asked him to do much more than be jacked and emotionally opaque, but here his performance is excellent. He is his usual stoic self, but manages to portray the complex set of emotions tied to unknowingly fathering a child and having the mother of said child being seriously involved with another man with an unexpected blend of energy and restraint.

In my book, Gosling, Tom Hardy, and maybe Javier Bardem are the only actors working right now who can simply appear onscreen and magnetize entire scenes, and here Gosling makes good use of this skill while relaying the tumultuous emotional terrain of his character's situation. Gosling's relationship with his child's mother (Eva Mendes) is complicated by the fact that she's ambivalent about him even knowing about their son (Gosling finds out from her mother when he visits her house) and is seriously involved with another man. The emotional high points of the movie all occur within this triangle, as Gosling and Mendes briefly get together, only to have Gosling overreach and send the precarious relationship crashing to the ground. Gosling and Mendes have a chemistry that's hard to come by in these roles: without much direct dialogue it seems clear that they're drawn towards each other and Gosling to his son, but Mendes maintains a distance that comes along with having a started a life with someone else while Gosling is unsure about how to proceed in wedging himself into that life. Watching them share the screen is like watching someone trying to push two negative ends of batteries together. Unfortunately, we don't dive as deep as we could into this dynamic after Gosling's actions finally catch up to him. And here we come to the problem with this film: Gosling dies at the hands of supercop Bradley Cooper, and the energy of the film dies with him. Cooper fills the protagonist void, and this is one his better performances, but he can't match Gosling. Not to say this is entirely Cooper's fault: the entire second act involves crooked upstate New York cops and the film transitions from an energetic robbery/wrenching love triangle to a police procedural that is largely unconcerned with procedure. Don't get me wrong, I admire directors and screenwriters that buck convention and try something that may result in a disastrous final product, like killing off the main character less than halfway through the film. The end result isn't disastrous here, just disappointing because the first act was so gripping and the second is formulaic and drab. We don't actually see cops getting set up or busted, just how Cooper navigates his way through a forest of dirty cops, eventually landing a job as assistant District Attorney. Cooper is lauded after he takes down Gosling, and shuns yet doesn't really seem to mind all of the attention. His father, a judge, wants him to run for office, and Cooper is predictably reticent about the idea ("I'm a cop! I'm a cop!" He yells at his wife at one point). Cianfrance hits all of the notes of a dirty cop procedural: creepy, menacing older detectives (Ray Liotta seems born to play this role here, even in his limited screentime), the higher ups who are also in on it, a drive out to the middle of nowhere for a one on one "meeting" between the ethical cop and the ringleader of the corrupt contingent, and the eventual tape recorder evidence presented to the reluctant but honest District Attorney. After the brilliant action scenes in the first act, we curiously skip over how all of these men are actually busted, and see them entering jail on a newscast Cooper is watching with his wife and father. The emotion and energy of the first act is replaced by structure and rote plot points in the second, and Cooper seems more like a prototype than a character.

Of course, the sneaking suspicion most will have through the second act is validated when the third begins, fifteen years later, with Cooper speaking at his father's funeral. He is running for attorney general, is divorced from his wife, and has his eighteen year old son (AJ) living with him. His son befriends a lonely stoner, and by lonely stoner I mean "Lonely Stoner": greasy, matted long hair, huge bags under his eyes, pseudo goth/skate wardrobe. This is Jason, Gosling and Mendes' son (just quickly on this point, this probably unfair and irrelevant, but the kid is lanky and average-at-best-looking: we're supposed to believe that Mendes and Gosling would produce anything other than one of the best looking people the world has ever seen?). At this point we can conclude that the entire second act was run through as quickly as possible to get to the third, setting up an Oprah Full Circle Moment on par with anything from Crash (maybe not actually that bad, but you get the point). I could actually feel my heart sink when Jason introduced himself to AJ. The film had devolved fully from a surprisingly complex heist/broken relationship movie to a we're-all-connected-look-at-the-effect-of-fathers-on-their-sons sermon. If it were a little less ham-handed, the final act could have been an interesting meditation on how past actions can come back to haunt even the most upright and successful people. Jason slowly connects the dots about his father (who Mendes refuses to talk about, in accordance with Gosling's dying wish) and snaps when he finds out that AJ's father killed his. He takes the same drive with Cooper that Cooper took with Liotta fifteen years earlier, and Cooper again escapes with his life. Jason leaves home and buys a motorcycle in what looks like an autumnal Vermont, and rides off into sunset while Bon Iver takes us into the credits. I can't remember being more frustrated during a viewing, not because the film is bad--all in all it's a fine film--but because if the first act had been extended by about twenty minutes (the material was certainly there) and then faded to black, it would have been stellar. Cianfrance coaxes a strong performance out of Mendes (who also deserves credit for playing a relatively haggard version of her usual onscreen persona), and the father/son angle--which the film is ultimately about--doesn't get any more interesting past the first hour. Instead the film goes from being driven by the characters and their emotional states to the tried and true conventions of the cop drama to briefly examining the psychological effect of not knowing anything about your origins, so, ultimately, there's too much going on here and not enough emotional or intellectual meat to keep the film interesting.
We need more writers about Eva-Mendes, Ryan-Gosling, Bradley Cooper, Derek Cianfrance and the place beyond the pines! Get started below...
Contributor
Michael Moeller

10 Upcoming Movies That Are In Big Trouble

10 Rules To Survive A Horror Movie

7 Strangest Things Actors Had To Do To Win Movie Roles

10 Insane MCU Rumours Everyone Wanted To Be True