(Our second review of this top-rate film after Shaun's last week) George Smiley will never escape his past. At the beginning of Tinker Tailor Soldier Spy he has already retired from the Intelligence Services. Every morning, he goes swimming at Hampstead Heath. When he comes home he checks for the slip of paper he has left in the door jamb; if he ever gets complacent an old adversary may catch up with him. His posture, hair and glasses are precise and detached. His lips sometimes suggest the faintest memory of smiling once. What isnt said in Tomas Alfredsons new adaptation of John le Carrés 1974 novel is as fascinating as what is; these people have to bury part of their identity or it may be taken away from them, or used against them as leverage. Nothing is off limits: they don't have private lives. Retired or not, their jobs define them. Smiley, as played by Gary Oldman, hints at great, troubled depths beneath his stoic and reserved exterior. On the outside hes a rock; too smart and guarded to give away anything personal. But at a key confrontation there is just the slightest twitch in the corner of his eye, and in that twitch you can almost sense all of his repressed anger, passion and pain trying to escape. Most of his emotions are buried so deeply he may not even acknowledge them to himself. This is the second screen adaptation of le Carrés novel after the justly famous 1979 television series starring the immortal Alec Guinness. Guinnesss portrayal has been thought of as definitive; while Oldmans doesnt take anything away from him, he at least proves that there is no definitive performance of the role (Simon Russell Beale voiced him on radio), and that le Carrés favourite character is enduring and complex enough to offer a challenge to any good actor. Oldmans performance, one of the finest you will see this year, doesnt keep reminding you of Guinnesss (although his voice is not a million miles away), nor does it make you think of any other Oldman role; if actors are split into those whose gravitas and charisma largely carry their roles and those who simply disappear into the character, he is clearly in the latter category. He becomes so completely and convincingly the part that the audience forgets that this is the man who played Dracula, Joe Orton, Sid Vicious and Commissioner Gordon.

As almost everyone, including the cast, has said, the story requires concentration. It is complex by necessity; any reasonably faithful adaptation of the novel would have to be, and the movie is incredibly skilful in compressing and rearranging the novel into a tight two hours. At its most basic the story involves Smiley returning to work to look for a Soviet mole at the top of the Circus. The previous head of the station, Control (John Hurt, who appears mostly in flashback) was himself trying to root him out, using the nursery rhyme alluded to in the title to give codenames to the suspects. It goes without saying that Smiley can trust no one. Thats only a very basic synopsis of the plot, which skips back and forth in time and includes about as many characters as the audience can keep track of; part of the movies strategy to make this easier is to cast respected, well-known actors in many of the smaller roles. It has already been said that this might be the cast of the year: as well as Oldman and Hurt there is Colin Firth, Ciarán Hinds, Benedict Cumberbatch, Toby Jones, Tom Hardy and Mark Strong. Because a two-hour movie cannot hope to explore these characters and let them develop the way a 400-page novel or 5-hour TV series can, casting actors like these on a purely pragmatic level allows the audience to keep track of whos who. However it isnt purely practical; most of those actors only have about one big scene to themselves, and some of them may have less screen time than the audience expects from the trailer and cast list, but they make the time they do have count. Their performances allow the characters to grow in the audiences mind. This ability  to evoke as economically as possible without slowing down  makes this the best screen adaptation of a novel Ive seen in some time; fans of the book, I would think, will not be let down, because the book hasnt been simplified. It continues to deepen and expand in your mind after it's finished. Fans of the TV adaptation may enjoy it for the fact it turns the series inside out, moving at a different pace and working through suggestion and evocation rather than patient development; it complements the series, but is in no way negated by it. The film respects its audience enough to expect them to keep up with various story threads that weave through each other and ultimately come together to form a conclusion that is satisfying without feeling at all forced. You dont feel like scenes have been stripped down until they are reduced to mere exposition; with only a couple of minor exceptions none of the dialogue feels contrived.

Rather than attempt to update the story to a contemporary setting, the movie keeps the action in the 1970s. This was wise: the plot would have to be rewritten so dramatically to make the story work now that it would be almost impossible to retain any of its original power. Together with cinematographer Hoyte Van Hoytema and production designer Maria Djurkovic, Alfredson recreates the 70s superbly; it almost looks like a movie from that era. The visuals are cold and joyless, which is entirely appropriate; stylistically the movie never gets complacent, nor does it strain too hard for its effects. Although the story is vastly different, its cold visuals are a reminder of the directors previous film, the superb Let the Right One In, as is the way sudden bursts of violence punctuate the movie. The moments of violence, which arent overly explicit, are powerful for the same reason Gary Oldmans twitch (which looked genuinely involuntary) is powerful. This movie is about people who live their lives liked coiled springs, and sooner or later that energy will break through, one way or another. The violence is repellent, but its almost like a relief from the tension and unease (particularly in the final sequence). This is a world where if someone has his hand in his pocket, you have to assume he might pull out a gun; a world where even the most intimate of personal details can be used to hurt and exploit. It won't be for everyone: some people have already remarked that the movie is too cold, too complex and too detached. You could say the same about George Smiley. 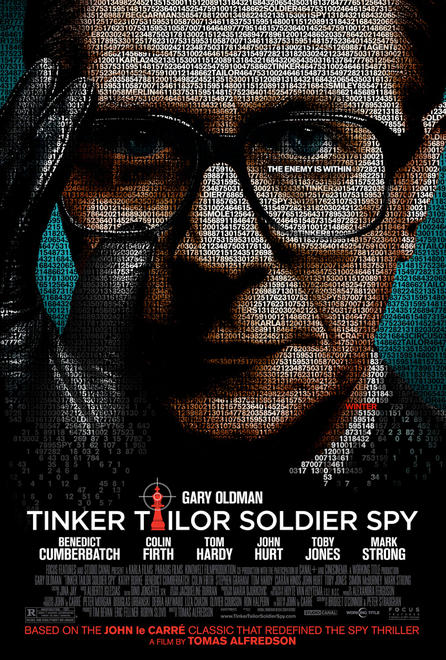 I've been a film geek since childhood, and am yet to find a cure. Not an auteurist, but my favourite directors include Robert Altman, Ernst Lubitsch, Welles, Hitch and Kurosawa. I also love Powell & Pressburger movies, anything with Fred Astaire, Cary Grant or Katherine Hepburn, the space-ballet of 2001, Ealing comedies, subversive genre cinema and that bit in The Producers with the fountain.