Tony Scott is forever keeping himself busy. Variety say the veteran helmer has added another project to his schedule, this one sounding like it could be fun. Scott is team with Fox 2000 to bring us a feature film about Don Aronow, the inventor of the 'cigarette boat' who was powerboat racing's world champion for ten straight years. The cigarette boat as pictured below was so slick and fast, that it became a favourite boat for Colombian drug smugglers wanting to import their illegal substances to Miami in the 80's. 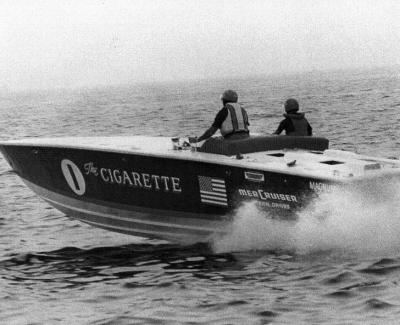 Aronow was paid a massive $20 million to build new and faster boats for U.S. customs which would help them catch the criminals. The script on the currently untitled feature comes from Michael A. Lerner (Deadlines) but the film will have to wait until Scott has finished his pre-strike movie The Taking of Pelham 123 with Denzel Washington for Columbia Pictures. Reading about Aronow's later life, the source material is readily available for Scott to give us his typical action sequences and Scott's love for boats, should make this news today of little surprise to anyone. It's Scott's type of film down to the ground.
Want to write about Tony Scott, Movie News, denzel_washington, don_aronow and The Taking Of Pelham 123? Get started below...
Editor-in-chief
Matt Holmes
Editor-in-chief
Facebook