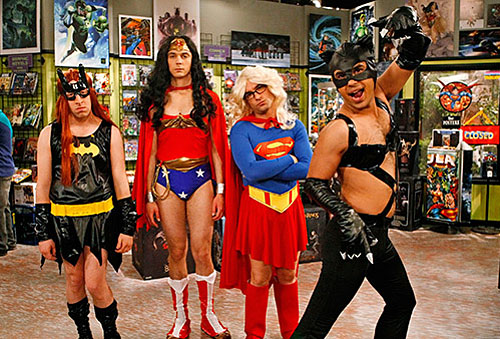 It seems to have been a Superhero fashion show this week with official sneak peaks at Henry Cavill's Man Of Steel and Anne Hathaway's Catwoman, and there's also been some looks recently at on-set photos of Thomas Hardy's Bane, more deatiled shots of Spidey's new pajamas and souped up duds for Thor and Captain America in The Avengers trailer. So, it only seems apt to have a rundown of the finest threads that cinematic superheroes have sported and then some of the fashion faux pas! 10. Mr. Incredible (2004)

Okay, it may be entirely CG but that doesn't stop it being pretty neat, though it's a sleek figure hugging (and stomach tucking) affair it may not be the most visually appealing of all the costumes on this list, but it is a darn sight more natty than the dull jumpsuits sported by the Fantastic Four and X-Men, plus, as the outfit's designer Edna Mode is more than happy to demonstrate it's both fashionable and practical. 9. Spiderman (2002)

Sam Raimi brilliantly montaged the creation of Peter Parker's spidey suit in a flurry of felt tip doodles that led towards the wonderfully bathotic reveal of a crappy amateur version, to be honest, I prefer this version as it reminds me more of the great Spiderman jim-jams I had as a nipper. But, once Parker moves to the big city he swaps this scrappy number for the standard jumpsuit, which he reveals - in Spiderman 2 - kind of rides up around the crotch. Nice. 8. Blue Raja (1999)

They may be a point of contention amongst his co-heroes that his outfit doesn't actually contain any blue, but, as the Blue Raja points out; if you know your history is does actually make sense. The film Mystery Men is a visual treat and inparticular Marlyin Vance's costumes are laced with as much wit as the film itself. 7. Rorschach (2009)

Michael Wilkinson did a great job with the look of the costumes in Zack Snyder's so-so Watchmen adaptation (he's also reponsible for Snyder's Superman), but the greatest accomplishment with Rorschach's costume was in part due to the visual effects department, getting the ebb and flow of his inky visage to work convincingly was both an impressive and subtle accomplishment. 6. Iron Man (2007)

The thing that works best about the Iron Man suit it that, perhaps partially through the physicality of the performance, there's an awful lot of character to it, unlike say Willem Dafoe's similarly chunky Green Goblin outfit that felt like an offcast from Power Rangers. Robert Downey Jr's Iron Man has a cocksure swagger and buckets of attitude especially when walking away from explosions like a cool guy. A big thumbs up as well to the rust bucket early version. 5. The Crow (1994)

A great costume to throw on if stuck for ideas at Halloween, black clothes and white face paint and you're done. Alex Proyas' deliciously Gothic film features a powerful performance from Brandon Lee and the visualisation of the character as Robert Smith pushed over the edge has become an icon of a certain kind of romantic, moody vengeance. It's simple but effective. 4. Superman (1978)

You'll believe a man can fly! But, most importantly you won't snigger behind his back at his silly red pants. Maybe partially due to the pure integrity of Christopher Reeves' performance, this suit just works, it's bright, colourful and quite ludicrous but he pulls it off. 3. Hellboy (2004)

Okay, in part I'm saluting the make-up job here too, but there's a coolness to the trenchcoat, leather pants and BPRD belt buckle combo as well. The coat's length does a good job of hiding the fact that our hero also has an unwieldly (and probably expensive, from a budgetary point of view) tail, but when Hellboy comes swaggering into town you could be forgiven for not immediately noticing the sawn-off horns for admiring his dress sense. (Reanimated corpse: Model's own) 2. Rocketeer (1991)

Despite his buddy Peavy telling him he looks like a 'hood ornament', I think the Rocketeer looks kick ass, combining his fly-boy leather jacket with the bug-eyed helmet and the sleek 50s design of his titular jetpack, well, he just makes me wish I had one too... that and Jennifer Connelly. It was Marylin Vance again who had a hand in this outfit, and she also was responsible for slipping Bruce Willis into that iconic vest in Die Hard, so the lady sure does know how to dress a hero. 1. Batman (1989)

So, what was Batman going to look like? The image undoubtedly etched into most people's minds up until Tim Burton unveiled his dark knight was that of Adam West in grey tights. It probably didn't help fan expectation that Michael Keaton was going to be behind the mask, but Burton knew what he was doing and, alongside costume designer Bob Ringwood, helped redefine the look of the caped crusader entirely. The chunky, pitch-black batsuit is more sculpture than costume (which didn't really help when it came to Keaton turning his head), an elegant flowing cape, hard bodied bulletproof muscle work and a nice bright yellow batshape all worked together to immediately erase the memories of Wham! Biff! and whatever from the 60s and instantly plunge audiences into this edgier, darker world. And the five worst...5. Batman (1997)

It was bad enough with all the codpiece action in Batman Forever, but Joel Schumacer really went to town on Batman & Robin giving us bat nipples. Bat nipples. 4. Steel (1997)

Remember Steel? It starred Shaquille O'Neal? It's pretty much got the same plot as Iron Man in so far as a weapons designers weapons are used by baddies prompting the weapons designer to make himself a super suit. Unfortunately Shaq's suit looks like it's made out of flimsy polystyrene. 3. Turboman (1998)

What better finale to a feelgood Arnie Christmas kiddie caper than Arnie getting to dress up as the must have kid's toy and do battle with stand-up comedian Sinband during a parade? When Sinbad is being carted off by the cops Arnie's son hands him the Turboman doll he wanted for Christmas and says, "Keep it, I've got the real Turboman now." And then I punch myself in the face. 2. The Phantom (1997)

Billy Zane's superhero flick is a guilty pleasure of mine, but it doesn't stop his costume looking a tad awkward, it's tough to make a purple catsuit work at the best of times, but it really all falls apart around the head hugging balaclava and painted on eye mask. 1. Catwoman (2005)

Everything about this is wrong. So, which costumes have I missed? Any favourites? Any particular pet hates? And which superheroes are your personal picks for fancy dress parties?
We need more writers about Watchmen, Iron Man, Hellboy, Catwoman, Spider-Man, The-Incredibles, Batman, Superman, Superhero, The Crow, costumes, steel, the phantom, jingle all the way, mystery men and rocketeer! Get started below...
Contributor
Owain Paciuszko

Owain Paciuszko hasn't written a bio just yet, but if they had... it would appear here.