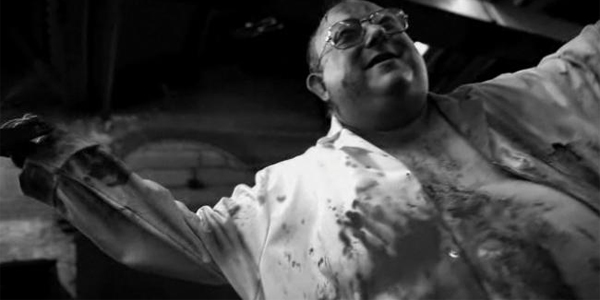 How do you follow a film which is to some people the most disgusting and depraved things ever projected? Well writer/director took it to the logical next step of making it more disgusting. The Human Centipede series is well known at this stage, between general viral marketing and word and mouth to an excellent episode of South Park parodying it. For the few of you that are unaware of the original it follows Dr. Heiter and his aim to sew together 3 people from one person's chocolate button to the next person's open mouth. The follow up is a fascinating affair. It follows Martin, played by a man who's short acting career has either hit a high or a low, Im not sure which. Martin is a loner who lives with his mum and is a bit off, like in the same way that a lot of people who take public transport are a bit off, simply put, you don't want to sit next to him on a bus, in a park or at the doctors. Martin's obsessed with the first film The Human Centipede (First Sequence) and as any sane person would want to do, he has the urge to recreate it, but with 12 people instead of 3. Overall the film is filled with things that you wouldn't want your mum or your worst enemy walking in on. But the concept itself intrigues me, the idea that the sequel is real because the first film is fictional. Although it isn't as meta as some of the other films on this list it does do what it set out to do and bring some almost perceived realism after a fantastical series opener. I say realism but any scenes involving barb-wire or sandpaper may be stretching that term.
Contributor
WhatCulture
Contributor
Twitter

10 Films That Changed Due To Fan Backlash

10 Movies That Were Saved By One Genius Tweak New

8 Actors Who Were Sued For Quitting Movies