Prisoners tells the story of two suburban Pennsylvania families (Pennsylvania by license plates, but actually Georgia by shooting location) who during a Thanksgiving celebration at one of the family's houses, lose track of their two young daughters. At first the families figure the girls have simply wondered off somewhere in the neighborhood, but as time goes by and the families search for the girls to no avail, panic starts to set in. Then, when one of the girls' older brother remembers seeing an awkward looking mobile home parked outside the neighborhood, the families get the police involved. The police, with Detective Loki (Jake Gyllenhaal) at the helm, quickly find the mobile home in question parked outside a gas station. As they cautiously approach the vehicle, it starts moving erratically and accidentally ends up crashing into a tree right in front of it. The police hurriedly arrest the young man behind wheel, a semi-mentally handicapped boy by the name of Alex Jones (Paul Dano) The police soon find out that questioning the suspect is futile, as he refuses to answer any questions and it is unclear if he even understands what is being asked of him. With lack of evidence and no progress being made through interrogation, the police are forced to let Jones go, much to the dismay of one the girls' father, Keller Dover (Hugh Jackman). Convinced beyond all certainty that Alex knows what has happened to his daughter, Dover takes the law into his own hands and kidnaps the boy, handcuffing Jones to a sink in an abandoned house and using his own brand of forceful interrogation. 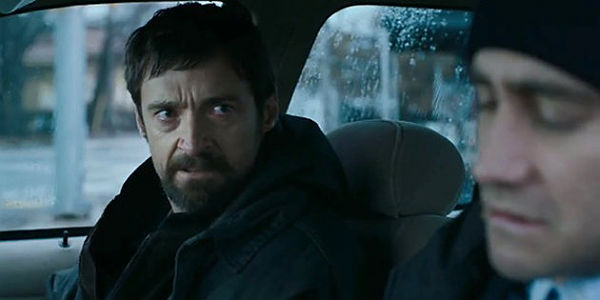 Lest you feel I broke the cardinal rule of internet reviews and forgot to put a spoiler alert before giving you this synopsis, don't worry, I haven't spoiled anything. In fact, I have revealed nothing that hasn't already be shown in the trailer for the film, but many have also complained that the trailer itself gives away too much. Don't worry, it doesn't . This movie is so much more than the glimpses we have been allowed to see, both literally, in terms of what actually happens in the story, and figuratively, because Prisoners is a strikingly stark thriller whose psychological effects on the audience goes far beyond the specifics of the plot. Prisoners is firmly in the vein of the underappreciated suspense-drama genre. The genre is a personal favorite of mine and even though it is all too commonly filled with cheap exploitative schlock that solely relies on labyrinthine narrative machinations to keep its audience engaged, when it is done right, there is nary a film that can mesmerize and keep you on the edge of your seat like the well-crafted thriller. Prisoners, I am happy to say, is a fine example of the genre done right. Many have compared the film to David Fincher's excellent Zodiac, and it's a fair comparison, but I think the more apt synonymous cinematic experience would be Clint Eastwood's Oscar-nominated Mystic River. Both film's meticulously deal with the devastation that befalls a family when one of their children go missing, and specifically, the films deal with the lengths that the family's patriarch will go to in order to save their children or deliver them justice. Prisoners, in particular, deals heavily in religious themes such as redemption, judgment, and forgiveness, as well as serving as sly, light-footed political commentary. While some may revel in the subtext of Denis Villeneuve's film, what struck me most about Prisoners is its style. The film is brutally uncompromising in its cold, steely, utterly objective point-of-view in which it lets the story proceed. The film never blinks from this intense stare, never succumbing to the temptation to manipulate, and the result is a solid gut punch to the soul. Now, a huge reason why this works so well (and I'm talking over 50% here) is because of the beautiful aesthetic look of the movie created by legendary cinematographer Roger Deakins. A ten-time Oscar nominee (but shamelessly never a winner), Deakins is most famous for his wonderful collaborations with the Coen Brothers, but his work with Villeneuve is at least on par with anything he has done with the famous filmmaking siblings. While my luddite-leaning sympathies has made me wary of the inevitable conversion from film to digital, in this one film Deakins proves (at least in my mind) that if guided by a talented DP, digital lensing can be just as effective as analog film. Even though the film takes place in a contemporary setting and doesn't include majestic landscapes, I hope the Academy recognizes the brilliance of this work and nominates him for an eleventh nomination. I would be remiss if I did not mention the terrific performances of the two male leads in the film. A lot of praise has been heaped on Hugh Jackman's performance as a distraught father who goes to extreme lengths and abandons all morality in order to save his daughter, and the kudos are well deserved. It's likely the best performance of his career (better than his Oscar-nominated performance in last year's Les Miserables), and if the Best Actor category wasn't filled to the brim this year, he would likely be a serious contender for awards attention. Jake Gyllenhaal, who has built a solid resume doing this kind of "second-lead" work, also gives a fine performance that doesn't draw a lot of attention to itself, but is absolutely vital in the scheme of the film's path to success.

Prisoners isn't a perfect film. At nearly 150 minutes, the film is a bit long and drags in the middle as it overly ponders the moral quandary the two families face with Dover's decision to take Alex prisoner. The final resolution of the plot is probably a tad messy as well and because of these small imperfections, it doesn't quite reach the levels of the aforementioned Zodiac and Mystic River. However, particularly on its technical merits, Prisoners is an amazing, terse film. Easily topping the list of films I have seen in Toronto thus far and one of the standout movies of 2013 as well.
We need more writers about Hugh-Jackman, Jake-Gyllenhaal, Prisoners, Reviews and Toronto Film Festival! Get started below...
Contributor
Christopher Lominac
Contributor
Twitter