Bloody Disgusting have two new images from DreamWorks' 3D vampire horror movie Fright Night, arriving in theatres on August 19th (U.S.) and September 2nd (U.K.) from director Craig Gillespie (Lars and the Real Girl). The first image (above) features Colin Farrell's vampire's hand burning as he taking a cross away from Anton Yelchin and the second image (below) features our vampire taking a bite out of a local neighbour. 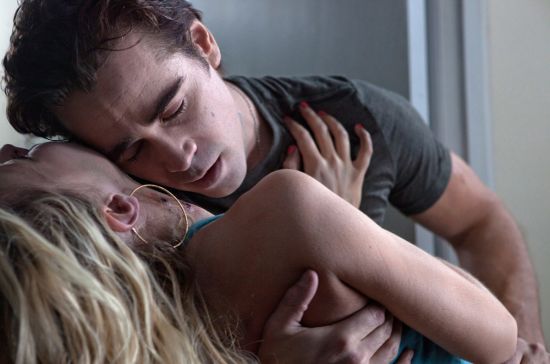 A remake of the 80's classic, Yelchin stars as a high school senior who discovers that a vampire has moved in next door and is preying on the the town. His mother (Toni Collette) tells him hes seen too many horror films but she soon falls under the vampires spell. So desperate for someone to believe him, Charlie seeks advice from Peter Vincent, a L.A. horror-imagery magician who claims to be a vampire expert. David Tennant will play Vincent in a younger portrayal than the original where he was a veteran vampire movie star and t.v. host. His name was a homage to horror icons Peter Cushing and Vincet Price, and was memorably played by Roddy McDowall. Several other Fright Night images were released previously featuring more of the film's supporting players including Imogen Poots and Christopher Mintz-Plasse;

12 Most Anxiety-Inducing Sci-Fi Movies EVER

15 Great War Movies (Nobody Ever Talks About)

10 Science Facts That Will Ruin Your Favourite Sci-Fi Movies

Harry Potter Quiz: You'll Never Get 100% On This Voldemort Quiz

10 Things You Didn't Know About Avatar

10 Astounding Facts About The Lighthouse You Didn't Know