Upstream Color is a film made without fear. Perhaps that is the highest compliment that I can pay it. If Shane Carruth (Primer) did in fact holding anything back, or had his vision compromised in any way, it certainly doesnt appear on screen. Instead, Carruths second feature is one of the most unique and abstract films of recent years, a picture as visionary and mesmerizing as it is challenging, and at times, frustrating. Here is a film that combines the visual poeticism of Malick with the sinister mindset of Lynch; a formless, ever escalating nightmare about two people growing together in connected isolation. The plot is best left as vague as possible, so perhaps all you need to know is this: A young woman, Kris (Amy Seimetz) undergoes a traumatic, forced experience in which she loses control of her own mind. After this experience, she tries to piece her life back together and meets Jeff (Shane Carruth), a man who is drawn to her by some nameless force. As their relationship grows, we realize that perhaps he too has undergone the same trauma, and their identities begin to bleed together and overlap as they get closer. We also learn that someone may still be watching (or even controlling) them from afar. Whats impressive is not only the ambition of the film, but also the confidence of its direction. So much of what happens is communicated without dialogue or structure that at times we can feel lost inside of the film. The first 45 minutes are absolutely stunning; the final ten are somewhat maddening. But throughout it all, we never feel that Carruth is lost. He knows where hes going, what hes doing, and what hes saying; what we take away from that is up to us. That he is able to not only attempt, but control this abstract of a film after only one previous feature is something to marvel at. 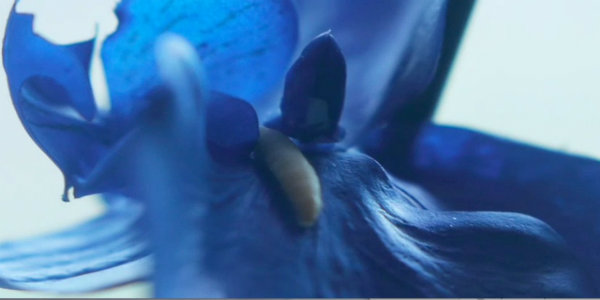 That aspect of individual interpretation is important, because this is a film that can be read to mean many different things. On one level, it is about loneliness and isolation, the way past traumas haunt and affect our present lives, and how entering a relationship forces us to change and alter our own identity. On deeper levels, it can be read to mean an almost infinite number of things, all depending on who you are and what you take into it. Leaving the theater, my first impression was that Upstream Color was a film about meeting and potentially killing God, thereby freeing the soul from any sort of outside control. Days later, Im not so sure. It is that feeling of impenetrability, combined with the coldness of its tone, that make Upstream Color easier to admire than to love. We look at it through a glass darkly, and while in many ways that openness is liberating, it can be equally as frustrating. As admirable as it may be, it still keeps us at a distance. But the film is worth seeing, and for those who do take to it (as I did), worth seeing a second or third time. I cannot say yet how multiple viewings would impact me, but I have a feeling that they would either draw me in closer to the film or drive me further away. Upstream Color doesnt feel like a movie with a middle ground. What it does have is its fearlessness, and that of its director, writer and star, Shane Carruth. That, for now, may be enough. Planning on seeing this movie? Seen it already? Let us know in the comments section below.
We need more writers about Reviews and Upstream Colour! Get started below...
Contributor
David Braga
Contributor
Twitter