Welcome to a new feature article series I'm going to try out, on the Great Cinematic Achievements, where I take a look back at the some of the very best classics and overall most influential movies of all-time viewing them in a slightly different light. For the first installment we take a hypnotic dark journey along with Detective John Ferguson through the distorted looking-glass of the maestro himself, Alfred Hitchcock.

In Vertigo, John 'Scottie' Ferguson is a newly retired San Francisco detective, trying to get over the accident that forced him into early retirement. An old college friend asks a favor of him, to follow his wife during her day and report anything 'strange' that she does. Scottie finds this odd but agrees in an effort to get back to some degree of 'normalsy'. What he finds; however, will do anything but return to his life to normal.

"So we beat on, boats against the current, borne back ceaselessly into the past "

Those are the closing lines of one of the Great American novels, if not the novel about life Americana. Those last lines of 'The Great Gatsby'; however, speak more to a universally shared paradox of the reality having to live life forwards but only understanding it in reverse. We are almost always drawing back into the past, holding on to the memories of the past of long ago and most recent, at times made throughly unable to move on. This is especially true of those complicated emotions we all feel: Love and Infatuation. Through the many variations of love, infatuation, lust and the need for affection, we become obsessed with an impossible ideal and not the blemishes of the real. It is only through Nick Carraway's third person perspective that the reader sees past the shallow effervescence of Daisy Buchanan, Jay Gatsby never could. It almost cannot be a coincidence how similar Scottie's (perhaps a reference to F.Scott Fitzgerald?) and Gatsby's experiences are. Shall we compare? 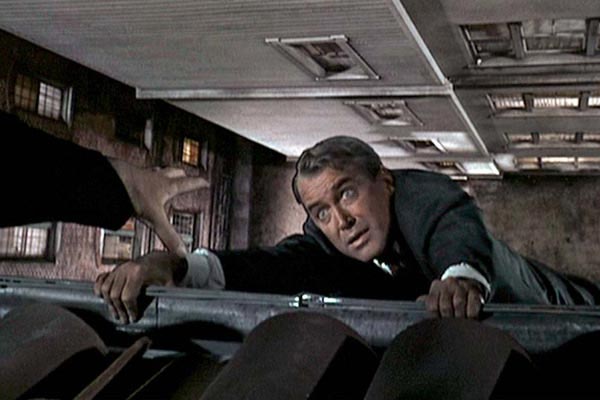 John 'Scottie' Ferguson (a revelatory, never better, Jimmy Stewart) begins his decent into the abyss by chasing a suspect along the rooftops of grand San Francisco. He loses his footing and dangles several stories high, barely gripping the gutter of the building. It is in this moment that he discovers his acute affliction of acrophobia (sometimes referred to as 'Vertigo'), that of the warping of perception while being at certain, small and large, heights. It is a fine time for it, as a cop helping him chase the suspect climbs down to help. He can't quite grab the helping hand, and unfortunately the roof siding gives way and the cop falls to his death. Bearing witness to all this, Scottie grasps the gutter for his dear life. This establishes a running theme, that his warped perception renders him unable to save those around him... and himself.

He then meets with an old college friend, thinking of it as a social visit. However, his friend Gavin has an ulterior motive for him (several in actuality); to tail his wife, Madeleine, as she does her daily errands about town. Gavin doesn't suspect an affair, so much as she is acting rather strange recently. Simple enough, more importantly it's a return to the normal for Scottie and should keep him away from heights, so he thinks.He does start to follow Madeleine (a superbly mysterious and statuesque Kim Novak) around town as she gets flowers, places them on a gravestone, stares at a museum painting (which bears a striking similarity to her) and checks into a room in an old hotel. Nothing particularly sinister about the goings-on, until he starts to become a tad too involved with the case.

From the first time he sees her in passing Scottie is incensed. Obsessed by her, by the vision of beauty, elegance and promise. He was always an ardent pursuer of mystery, and Madeleine is his greatest case. A woman unwillingly drawn, seemingly supernaturally, into a sordid past. He believes he can help her, to save her from a supposedly inevitable fate, only to be left helpless yet again. He is crippled by his fear, and he can only witness the self-destruction of Madeleine, only amplifying his own inner turmoil. It is probably as good of a time as any to focus in on Stewart's performance, for again he was never better than here. After getting back from flying bombing raids in WWII, he started to choose darker roles separating himself from his pre-war insanely likable characters. Nonetheless, he was always able to lend his grounded and down to earth charisma to these darker characters. Which is why Scottie here is so jarring, how could a seemingly well-adjusted grounded guy fall so completely for a shade, a hollow pursuit as it turns out? It is all in what she represents for him, a mystery, the promise of a happy life lived before that he can never shake. It was a little different for Gatsby as Daisy represented the end result of his 'transformation', he couldn't have her before being 'Great', if he could now it would mean he was completely changed. It is this idea of imprinting our own insecurities, hopes and dreams onto the people we fall for, making our expectations irrationally high, that more often than not leds to the breakdown of a relationship. It is after Madeleine's demise, in his darkest most morbid moment, that Scottie falls into a deep depression of guilt and sorrow. This is where the famous dream sequence takes place (placing #2 on my own top ten Dream Sequence List). Imagery fused with the past and present, which culminates in a colorful mixture of live-action and animation. He wakes from this 'trip' in a state of disillusionment and detachment and is institutionalized. All the while his painter friend Midge, ever the naive care-giver, comes to his bed-side in the mental clinic. As she leaves for the last time, perhaps realizing that nothing will bring the old Scottie back, so does any ties to reality for him.

"He had come such a long way to this blue lawn, and his dream must have seemed so close he could hardly fail to grasp it. But what he did not know was that it was already behind him, somewhere in the vast obscurity beyond the city..."

After being let back into society after his mental meltdown, Scottie wanders, looking for the intangible, the impossible, a ghost. He searches near and far, and shockingly enough (Not so coincidentally, for those that know the twist) finds his ghost walking down the street by the name of Judy. They are both lonely people and need company, and they sart seeing each other. Jimmy Stewart being the only man in history who could make "you remind me of someone I knew" work as a pick-up line. However, things are not all "flowers and chocolates" as they seem to be. Close to his desires isn't enough for him. Reality is no longer enough for him.

"There must have been moments even that afternoon when Daisy tumbled short of his dreams--not through her own fault but because of the colossal vitality of his illusion. It had gone beyond her, beyond everything. He had thrown himself into it with a creative passion."

He wants Madeleine, the vision, the promise. He makes Judy over to look and walk just like her. Judy at first refutes his need to change her into his vision, but eventually she can only succumb to his twisted desires. They are both trapped leading to an inevitable conclusion at this point for many reasons. Scotty because of his irrational imprinting on Judy, and Judy because of her guilt both as being the central cause of his meltdown and as an accomplice to murder. Hitch would often use statuesque blonds, much like a stage magician's assistant, as a means of misdirecting the audience. It was never more apparent in Vertigo, with the Madeleine/Judy role, hiding in plain sight was the truth behind Scottie's mystery. After several trips to buy new cloths and make-up (or rather her not so old makeup and cloths), she walks into her bathroom for one last hair touch-up that will 'change' her back into Madeleine. As Scotty waits for her to come out, the room is bathed in green-neon light. What follows is one of the greatest shots and scenes in Hitchcock's career if not one of the most indelible as she becomes, if only for an instant, the impossible. Scottie is instantly drawn back to when Madeleine first kissed him passionately, while cutting back to this moment when he is kissing Judy. The camera spins between past and present, as they are in this moment one in the same. They embrace for what seems like ages, Scottie must feel like this must be a dream. Well, it is indeed and the wake-up call will be as jarring as falling into it. After his dream collapses in on itself he confronts her about the truth, the two being inevitably brought back into the past. Just as Gatsby couldn't shed his former self, Judy couldn't shed Madeleine. The film ends with history being repeated to tragic effect, as it usually is. 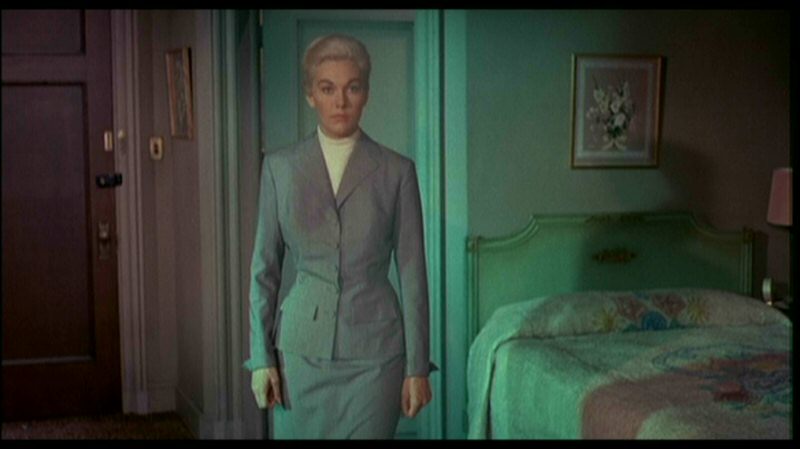 At the time of it's release, having done poorly at the Box Office, Hitchcock labeled it a failure. He pinned the problem on it's leading man (wasn't quite the 'everyman' this time, at least according to Hitch) and the two would never work professionally together again. Stewart would later reveal he was somewhat 'embarrassed' having an onscreen lover half his age, where as most other middle-aged actors today wouldn't think twice about it. Nonetheless, he gives a painfully sympathetic portrayal of a man coming apart. it is a great tragedy and loss to the world of cinema that they never collaborated again, if this film was any indication of what future collaborations had in store. The dream-like story winds in and out of reality like an ivory-needle through silk. Scottie winds up and down the oscillating hilly streets of San Fran, looking hopelessly for his sanity. The imagery haunting and the characters haunted. Today it is widely considered one of Hitch's best (infamously topping Sight and Sound's 2012 best ever list, dethroning long-time stalwart Citizen Kane), and an out-right masterpiece of the art and the mind. The question that may persist with the audience is why Scottie went to such lengths to 'resurrect' Madeleine, to great detriment of his newfound love? Simply put, he "...believed in the green light, the orgiastic future that year by year recedes before us. It eluded us then, but that's no matter--tomorrow we will run faster, stretch out our arms farther.... So we beat on, boats against the current, borne back ceaselessly into the past."

Now that we're out of the rabbit hole, so to speak, let's wise-up with the movie that epitomized 1990's cinema at large. Martin Scorsese's 1990 kinetic violent masterpiece: Goodfellas.
Want to write about Vertigo, James-Stewart and The Great Gatsby? Get started below...
Contributor
Jeffrey Stewart

Harry Potter: 10 Behind The Scenes Secrets That Will Blow Your Mind