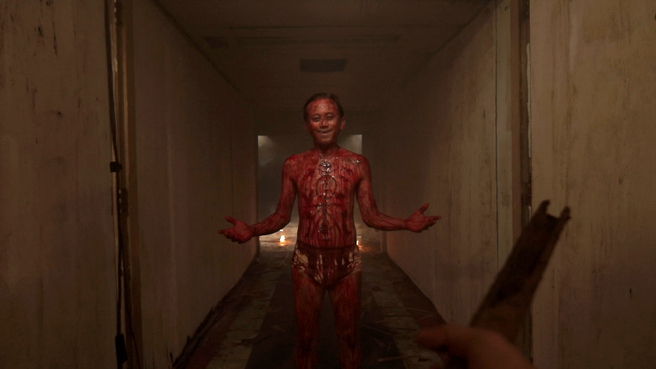 Are you familiar with the three Bs? Dont fret if you arent; honest mistake. Most wouldnt know what they stood for unless they had a penchant for skin-crawling content or a passionate knowledge of all things horror and science-fiction related. Don Dohler was an archetypal filmmaker for the sacred formula of Bs as he committed his life to creating and producing such movies as Nightbeast, Fiend and who can forget Alien Factor 2: The Alien Rampage? While such a coagulated patrimony might be brushed aside by most, his influence and honest prescription for a horror films health has been everlasting. And those three little Bs? Blood, boobs and beasts. Such an ideal has been adopted by countless films and now, V/H/S/2 continues the trend with wreckless abandon. . . And its all the better for it. Last year, V/H/S splattered select screens with an anthology of grim, comedic and unrepentant nastiness. As with most films developed from multiple malicious minds, the resulting product was fun albeit flawed. While two of the six shorts (including the wrap-around) were clever and embodied the gruesomely entertaining spirit of what a horrific omnibus should be, the remaining four were disappointments considering they offered a few singular intelligent ideas amidst many bad ones. Hands-down, the most successful short was that of David Bruckners introductory offering entitled, Amateur Night; a creatively grisly account of three fat-boys demise at the hands of a toothy femme-fatale. To say the cinematic slices that followed were a mixed bag is cliché, but very true. Understandably, it would be difficult to one-up such a monstrously amusing preamble, but the filmmakers hereafter seemed hardly interested in anything of real value beyond red slop, gratuitous tit shots and an aggravating assault of douche-bag behavior. V/H/S was a fantastic concept as it pulled some of the biggest names of present-day fear-fuel into a solitary piece of disturbia, but it was utterly marred by a third of its partys ill contributions.

Thankfully, V/H/S/2 is a far more successful sequel as it rights most of the firsts wrongs by focusing more on tension-building and brutal intensity, rather than sheer hyperbolic shock. Where V/H/S became repetitive in its nihilism and focus on obnoxious males getting their bloody comeuppance, this addition to the canon chooses to switch things up by offering four vastly different stories that possess levels of attention and creativity that the prequel simply lacked. That, and the directors this time around actually understood that just because your film is short, doesnt make it any less important than a feature-length flick. Less definitely equals more as V/H/S/2 condenses its structure into four shorts (and one wrap-around) rather than five (and the wrap-around, of course). Due to this reduction, more time has been allotted to the projects that truly deserve it--namely, Gareth Evans fantastic effort, Safe Haven. But more on that immensely satisfying offering later. . . First, lets take a gander at what precedes it. Practically a throw-away story, Simon Barrets wrap-around involves a PI investigating the disappearance of a young man (pay attention to that laptop) and his last known whereabouts: a decrepit home that screams Evil lives here. Not literally, of course, but it might as well. With its derelict interior, dark hallways and creaking floors, its a proverbial warning to all outsiders. Such foreboding signs dont stop our detective duo as they sneak in and uncover a frightening collection of static-filled televisions and numerous video cassettes spastically arranged around them. As the PI makes his rounds through the house, his female counterpart begins to watch the tapes. . . And slowly, something more sinister begins to presents itself. . . Unarguably the weakest of the bunch is that of Adam Wingards, Clinical Trials. During this ghostly trek, Adam himself stars as Herman, a young man who was injured in a car accident and now sees via an optical implant. From here, we witness life from a first-person POV. As with any unproven surgical trial, nothing goes according to plan and Herman begins witnessing specters from another realm. Of course, they mean only harm and its up to a young woman to save him from their deadly grasp. Initially, Clinical Trials lays down some slightly unnerving scares before devolving into a rush-job of patchwork design. Even as a short--its too short. Just as the plot begins pinching a compelling nerve it sprints to the finish with a brief striptease (ghouls cant attack if youre having sex? Wha--?) and an uninspired chase scene that culminates in a certain characters wink-wink demise. Wingard was the only returning director from the first entry and its here that he once again shows why feature-length films are his forte (and even then, thats questionable). Clinical Trials has a first act and muddles with a second, but collapses under the weight of having to offer any sort of conclusion beyond an obviously foreshadowed gore gag. Its an improvement on his weak wrap-around from V/H/S, but heres hoping that when/if V/H/S/3 arrives, hell finally be able to contribute a worthwhile piece of terror rather than meager filler. Then again, if his addition does one thing correctly, its that it makes the following shorts look all the better.

Next up, we have, A Ride in The Park; Eduardo Sanchez and Gregg Hales take on the zombie apocalypse. Utilizing both a standard POV and that of a Go-Pros lens, we observe the ravenous carnage that one walker wreaks as his groaning brethren follow suit. Not only do team Blair Witch incorporate some snazzy camera maneuvers (gotta love that car-smash), but an application of heart and sadness ultimately punctuates all of the bloodshed and grounds the short film in a solemnity. It doesnt break ground within the zombie canon, but it does offer a worthwhile take on a mans gradual loss of life that is altogether intriguing. . . And gruesome as hell. The third entry is absolutely the most stunning in both form and content. Gareth Evans nestled hisself a cozy spot in mlittle heart last year with one of the greatest action movies ever conceived: The Raid (or, The Raid: Redemption here in the states). Such a choice in a director is audacious (considering he hasnt dipped his hands into horror before), but proves to be V/H/S/2s most brilliant maneuver. In Safe Haven, a film crew is allowed into the sanctimonious abattoir of a religious cult who feel as though society has painted them in a bad light. After agreeing to truthfully depict them and their practices without bias, the close-knit documentarians pass the tropical threshold into a realm that becomes all the more threatening the longer they keep pressing the record button. Shocking, terrifying and exciting. . . Three adjective which immediately spring to mind and perfectly describe the sacrilegious havoc that rains red upon the celluloid. Evans proves he can do more than just stage jaw-dropping action with one tension-building set-piece after another before permitting everything to go to hell. This was easily my favorite and jabbed a syringe of adrenaline straight into the beating heart of V/H/S/2 that it sorely needed. Honestly, Safe Haven is worth the price of admission alone and elevates the anthology to a far more respectable degree than simple camp. . . Though, it has a little of that too. . . Just for good measure.

Lastly is Jason Eiseners Alien Abduction Slumber Party which is. . . Well, its pretty much exactly as it sounds. A bunch of kids fall prey to the Third Kind after a day of pranks, porn and water balloons. Theres a great deal of fun to be had in the roustabouts shenanigans and the focus on the friendly dynamic makes the impending alien attack all the more effective. Once the neon lights adorn the frame and the trumpet blast foretells their coming, Alien Abduction Slumber Party becomes an exercise in hunting as, one-by-one, the perverted tykes are snatched by the slender-fingered beings. What makes this ingredient to V/H/S/2s recipe all the more endearing is that the entire ravishment is seen from knee-level by a lovable mutt. Like Clinical Trials, there are some decent jumps and akin to Safe Haven, the latter half is frenetically paced. However, I personally felt as though Eisners project wasnt ambitious enough and instead vies for conventional action rather than ingenuity. Its not that its bad, its just that its not as good as it could have been. Beyond a creepy crawl atop a boardwalk and a snazzy shot of a childs suction heavenward, theres just nothing that truly sticks with you once the endeavor comes to an abrupt close. That, and as a dog-lover (SPOILER), I found the canines fate to be in bad taste as the lil guy plunges from a great height, smashes into the ground and then stares into the vacant lens of a camera as it elicits whimpers from its broken body and slowly bleeds out onto the pavement. Necessary? Im possibly the biggest fan of Hobo With a Shotgun and will continue to sing its grindhouse praises, but I hope that (much like Wingard) Eisner finds his footing and begins crafting pieces that are on par or above that which put him on the grue-stained map in the first place. Hes developed two shorts and a feature thus far, and his original homage to ingenious exploitation is still his greatest triumph. Alien Abduction Slumber Party isnt bad at all, its just not as significant as it could have been. And then the tie that binds the series of arterial-spurting shorts together ends on yet another snivel rather than a blood-curdling cry. Simon Barrets wrap-around continues Wingards exercise in build-up without delivery (they are buddies after all) by adding vague hints to the V/H/S mythology before botching it all with a weak scare that only garnered a Meh from my mouth which was then quickly followed by a What? (youll know when you see it). I respect Barret for trying to take the overarching narrative in a different direction, but an idea is all he offers. He doesnt give us a story; he merely presents a series of surreal, unexplained events before turning out the lights.

Like that which came before it, V/H/S/2 is a mixed effort, but one that improves on everything that worked in the first while avoiding--for the most part--many of the pratfalls which guarded the first installment from greatness. Its a good time and with friends--its even better. Anthologies are hard to come by; accomplished anthologies are nearly nonexistent. Creepshow tried to revive itself with a mess of a third entry and the recent ABCs of Death was an appallingly misguided torrent of terrible. Thankfully, where V/H/S gave such a dying venue of film a breath of toxic life, V/H/S/2 has used such foul air to fill its rotting lungs and continue the legacy of such a lost cinematic form. And Im a-okay with that.

Greetings from The Yentz! The Warrior of the Wasteland! The Ayatollah of Rock and Rolla! I live, eat and breathe film... And videogames... And comics... And, well... Anything that might be considered "nerd related". I consider myself the voice against that of mainstream cinema. While critics might praise the ostentatious drivel supplied by Oscar-pandering films, I enjoy directing attention to less popular gems in hopes of educating people on incredible film experiences that may not be backed by massive studios, nominations and a star-studded cast. Outside of WhatCulture!, I write for Movieweb, assisted BlueCat as a script analyst, have worked on films from the east coast to the west and continue to write, critique and direct here in the lovable land of ol' LA. I hope you enjoy reading my diatribes as much as I enjoy writing them.