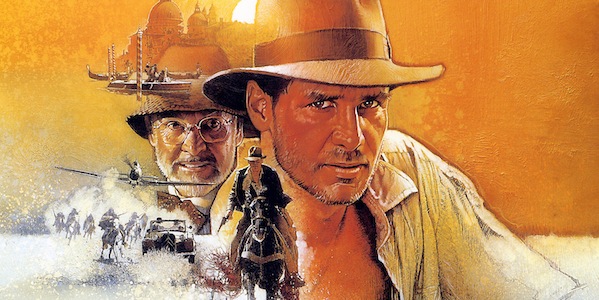 It's safe to say that most of us who are enthused by cinema and all its offerings have some kind of affection for Indiana Jones. After all, what's not to like? He's adventurous, dry, good with the ladies, intelligent, unbelievably cool and - in the most endearing way possible - kind of a goofball. George Lucas originally envisioned Indiana Jones as more of a James Bond type character, all martinis and cigarettes, but Lawrence Kasdan's wonderful script for Raiders of the Lost Ark painted him a little differently: instead of suave and collected, he was written as a guy who just makes it up as he goes, a trait which ultimately served to make him all the more human. Harrison Ford, who was shockingly the second choice to play the role, personified it majestically. The Indy films are some of cinema's best loved endeavours (we'll try and forget about the latest one), and it's assumed, as with most things, that everybody has a favourite. Unlike with The Lord of the Rings films, whose fans insist each chapter shouldn't be considered exclusive, and that it's "one continuous journey," the Indiana Jones adventures are certainly different affairs. Each movie strikes a different tone, conjures a unique atmosphere, and embodies individual strengths and weaknesses. So what does your favourite Indy say about you? Which aspects of each film hone back to your inherent movie instincts? Does it go back to an appreciation of the craft of cinema, or a nostalgic grip you can't quite shake? What draws you to your particularly favourite adventure above all the others? No need to think about it - we've gone ahead and worked it all out for you.

9 Films You've Never Heard Of With 100% On Rotten Tomatoes