Since the Christmas market represents probably 90% of sales for stand-up comedy DVDs in any year, there is inevitably a flood of new titles - usually based on the performer's current or most recent tour - onto the market and it seems only fair to follow the trend set by last year's Gift Guide and present a selection of the finest stand-up releases of the period. So what makes a good comedian? Well chemistry is a big plus, and the ability to command both a sizeable stage and a mammoth audience (as these DVDs are usually filmed at the bigger venues), but it all comes down to material and personality. If you don't have either, you probably shouldn't be on the stage. Luckily there are those who do pass the grade. Tis the season to be jolly and all that and with that in mind here are ten of the best, in no particular order...

Milton Jones - Lion Whisperer Brilliantly odd, with an off-hand sense of delivery that makes him a hugely likeable on-stage presence, Milton Jones has made more of a name for himself this year thanks to more appearances on the usual comedy panel shows (and making a mockery of the decision to offer places to terribly unfunny people on the same shows). Lion Whisperer is the comedian's second major release following his mainstream penetration, and it packs in his usual irreverent, odd-ball comedy and irresistible awkward charisma with a laugh a minute rate to embarrass most of his more anecdotally-minded rivals. 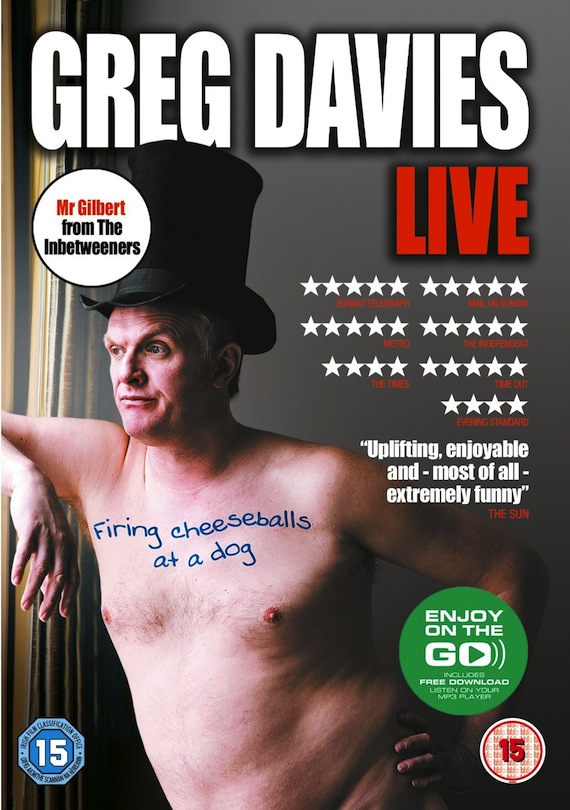 Greg Davies Live - Firing Cheeseballs at a Dog Some might say he is no more than a very angry, giant version of Rick Mayall, but Greg Davies packs a significant a comic punch, with the best angle on the angry man routine currently gigging (Rhod Gilbert's got a bit too silly with it for his own good). He may have started off as part of comedy troupe We Are Klang, but Davies has made the move into solo work, with a sideline in comic acting (as the incredibly funny Head of Sixth form in The Inbetweeners), relying heavily on the often ludicrous events that have shaped his life. Formerly a drama teacher, a career decision he seems to lament quite passionately, his anecdotes spring to life, with some affecting oddball moments and his engaging style of delivery is such that even when you suspect he is fictionalising, you're completely willing to accept what he is saying. Like Milton Jones, Davies also has the most wonderfully interesting face for comedy, and can do a remarkable job of looking grotesque which always helps win comedy fans.

Tim Minchin and The Heritage Orchestra - Live at The Royal Albert Hall Like Noel Fielding and Russell Brand, Tim Minchin occupies that space reserved for sexy, slightly awkward oddities. The Australian has rock-star looks, but an affected reservedness that makes his musically-tinged comedy all the more endearing. As a dedicated musician, this show looks like a a realised dream for Minchin, who uses the orchestra to add scale and pomp to some of his most familiar comic songs as well as introducing new songs. He is one of the most charming, flirtatious comics currently working, and it's very easy to get lost in his performances, which is good since the DVD offers a massive two and a half hours of footage. Unlike Bill Bailey, who tends to use music as an explicit joke (like in his car-horn Metallica bit), for Minchin the jokes are more lyrical, with music simply offering the backdrop to his sense of humour, and in that respect he is one of a kind right now.

Jason Manford Live 2011 Some comedians push the "Northern and Proud" label a little bit too far, but some, like Jason Manford and Peter Kay manage to keep the right balance thanks to effortless charm and likeability and the kind of cheeky delivery that makes the North such a hotbed of comedy. Manford's skill is in engaging his audience so well that to a man they imagine he is talking just to them - there is no unnecessary spectacle or artifice to his show, despite the shiny purple set of his 2011 tour, and he has a good-natured friendliness that is hugely contagious. Definitely the comedy DVD I looked out for most this year, and it didn't disappoint. Jimmy Carr: Being Funny The crown prince of controversy, Jimmy Carr can these days be found apologising for his latest jokes on Twitter as much as he is on screen or on stage, but he is also one of the hardest working comics on the circuit, touring endlessly and putting out new material at a furious rate (usually a DVD every year). His shtick is of course familiar now - posh boy with the kind of contagious laugh and cheeky chappy delivery that means even the most barbed material manages to raise hearty laughs. He is perhaps the best personification of the term "acerbic wit" I've ever experienced, and the frequency with which he puts out material doesn't seem to matter to its quality. Likely to be one of the biggest sellers by Christmas, and rightly so. Just don't let your granny watch, as she's likely to fall for the charm, and then spit her teeth out at his colourful punch-lines, which is of course precisely why we love him.

Alan Carr - Spexy Beast Alan Carr is a comedy material goldmine: his physicality is often the butt of his own jokes, and he was born into a footballing family (his Dad currently works for Newcastle United) despite his own total aversion to the sport. That outsider status, honed further as he grew up as a homosexual in a series of dead-end, mind-numbing jobs, gave him the perfect position from which to observe, and his pithy wit now allows him to relate some hysterical anecdotes and observations (usually relating to his own interactions with people) with a seriously engaging on-stage character. This year's show is typically accomplished: Carr has no airs or graces and the manner of his delivery, thanks to a wonderful, iconic voice helps his audience be completely sucked in to his routine. He's not necessarily the most naturally confident person, but Carr is undoubtedly one of the most purely funny comics these days, without the need to build a routine too much who thrives on audience reactions. A very, very good DVD. Stephen Merchant Live: Hello Ladies The question with Stephen Merchant was always going to be whether he could turn an undoubted ability to write comedy into a stand-up show: unfortunately for some of the best writers, timing is a major part of delivering the goods on stage, and charisma isn't always as easy as writing skill. But Merchant is a funny man - his odd look, thanks to his stature and gangliness helps, and he has a very funny geeky presence that is completely at odds with comic partner Ricky Gervais' arrogant persona. He's friendly, and likeable, and while some of his material isn't the freshest, his energy is enough to make it feel newer.

Russell Kane: Smokescreens and Castles Live 2011 was a break-out year for Essex lad Russell Kane, whose show here depends on some obvious emotional scars, thanks to a fractured relationship with his cliche-ridden father as well as a theatrical style that can tend towards the OTT, but which works very well when pitched correctly. The mark of the show's quality was that it won him last year's Edinburgh Comedy Award, which is hardly something to be sniffed at, and this DVD recording is an improvement on that award-winning work. Kane is energetic to the point of hyperactivity, intelligent and surprisingly political and this DVD is the strongest showcase for his talents yet to appear.

Peter Kay Live - The Tour That Didn't Tour Tour A bona--fide superstar of British comedy, Kay probably doesn't need to tour ever again, or indeed work at all, but he can still pull in a massive, expectant crowd and present them with the kind of anecdotal, observationalist comedy that can either raise a nostalgic smile or have people rolling around in the aisles.Kay has honed his art in some of the biggest venues in the world, and while there might have been reservations concerning the transition into new material after his old material became as familiar as common sayings, his effectiveness was always about delivery and presence. He has the kind of warm, welcoming stage persona that you would happily listen to him read the shipping news, and his 2011 DVD is a must for fans, even if the edit isn't great.

Patrick Monahan Live: Show Me The Funny Winner's DVD The winner of talent show Show Me The Funny released his first DVD after the competition, having already won another televised competition in the shape of ITV's Take The Mic back in 2001 and being a regular on the touring circuit at major venues and at the Edinburgh fringe. Why it took 10 years and another competition win to bring Monahan to the masses is frankly baffling, because it becomes immediately obvious watching this break-out DVD that the Irish-Iranian who grew up in Teesside is one of the finds of the year. Live audiences will have been raving about his anecdotal style for years, and now the DVD buying public can join in the appreciation. You can win every single one of these stand-up DVD titles by visiting our Competitions section. Happy trails.
Want to write about stephen-merchant, Greg Davies, Milton Jones, Christmas Gift Guide, Stand-Up Comedy, peter kay, Jimmy Carr, Russell Kane, Alan Carr, Tim Minchin, Patrick Monahan, Jason Manford and No Ads? Get started below...
Contributor
Simon Gallagher
Contributor
Twitter

9 Actors Who Helped Movies In Ways You Won't Believe

16 Delayed 2021 Movies That Were Actually Worth Waiting For