We then have a shot of Magneto seemingly guarded by Iceman, followed by (you guessed it), even more character shots. This time they're of the latest additions to the cast: Bishop (Omar Sy), Sunspot (Adan Canto), Warpath (Booboo Stewart), and Blink (Fan Bingbing).

The X-Men and Magneto look set to enter an 'Enemy of my enemy is my friend' situation as Magneto proposes an alliance: "Side by side we can end this war. Before it ever begins". The X-Men also seem to have relocated to a new base as we see them walking through what looks like a temple where a fair bit of the scenes in the present seem to take place. We also get a better look at the new X-Men uniforms which are a lot more militarised and armour-like than before. 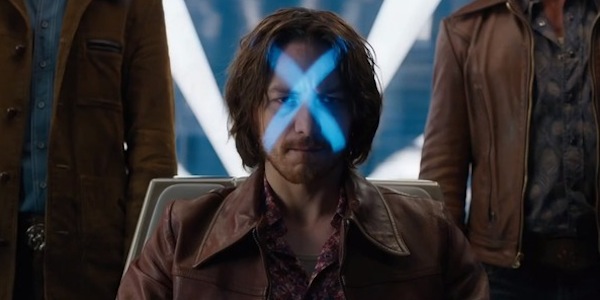 Wolverine notes that he will wake up in his body in the past (much like Ashton Kutcher in The Butterfly Effect) and asks what he has to do. Xavier tells him to find Young Xavier and convince of him of what's happening. Implying that most of the film's first and second acts will focus on the task of finding Young Xavier and recruiting him. We then see Young Xavier entering Cerebro, looking considerably less well groomed and optimistic than the last time we saw him, and maybe starting to go a bit Howard Hughes.

We get our first look at Young Magneto as his older self tells Wolverine that both his and Xavier's past selves will be needed to stop the coming war. Also, Magneto's ditched the scarlet evil overlord outfit we saw him in at the end of First Class and has not yet developed the "Humans and their guns" viewpoint. We don't know who he's pointing the gun but the odds are it's either a revenge or political killing. We also catch a glimpse of Young Mystique as she sheds a single tear, possibly out of guilt over ditching the X-Men right after Xavier was paralysed. Because, let's be honest, that was a real d*ck move.

JG Moore is a writer and filmmaker from the south of England. He also works as an editor and VFX artist, and has a BA in Media Production from the University Of Winchester.

25 Things You Didn't Know About Die Hard With A Vengeance

MCU: The Worst Thing EVERY Avenger Has Done

12 Movies Literally ONE Step From Perfection

10 Great Films That Are Ugly On Purpose

Harry PotterQuiz: How Much Do You Know About Tom Riddle? Community