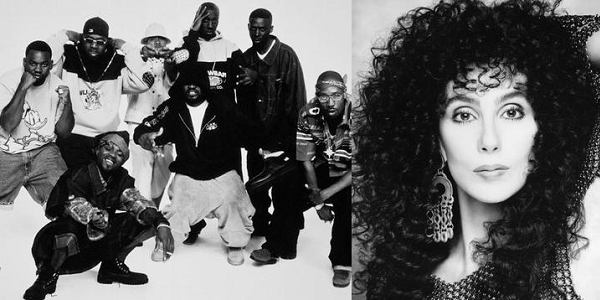 The hallowed halls of music history are festooned with classic duets, from Johnny Cash and June Carter to Ella Fitzgerald and Louis Jordan to, um, Kenny Rogers and Dolly Parton. Okay, so not all harmonious pairings are created equal - or even necessarily with good harmonies - but some are even less equal. In fact, some of that make absolutely no logical sense. Take, for example, this week's news that Cher has swapped out Sonny Bono in favour of the Ghostface Killah, Method Man, RZA, GZA, Barney McGrew, Cuthbert, Dibble, and Grub. Yes, the singer/actress/Twitter expert is set to appear on not one but two songs on the band's weird new one-off record Once Upon A Time In Shaolin (credited under the name Bonnie Jo Mason, no less). Cher Rules Everything Around Me, Anyone? Believe it or not, that's not the most insane musical team up we've been blessed with over the years. It's not even the most insane union Wu Tang entered into. Read on, why don't you?
Contributor
Tom Baker
Contributor
Twitter

10 Hard Rock Bands That Insulted Their Own Fans

10 Musicians Whose Careers Were Destroyed By Just One Song

10 Most Ambitious Rock Albums Ever Made