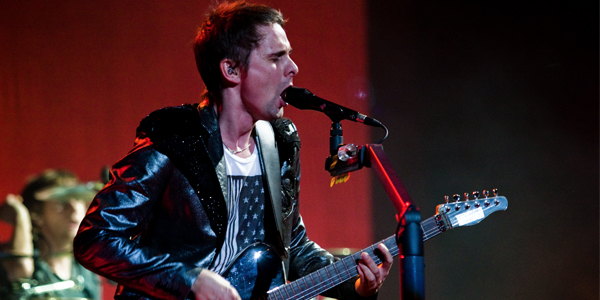 Let's get one thing straight - I am a massive Muse fan. To straighten that out even further, I was a massive Muse fan. Without slipping into too much self-indulgence, 'Origin Of Symmetry' was the first album I ever bought at age eleven, and coincidentally also the first album I ever played to death. Later that summer, in my own running order of Muse purchases, came their debut 'Showbiz', and their place in my young musical heart was secure. I can easily imagine other long-time fans having a similar initial period of obsession with this finest of indie-prog-something rock bands, around the turn of the century. Time however has not been kind to that earliest of passions, with both 'The Resistance' and 'The 2nd Law' being somewhat patchy. Muse have come to resemble an admittedly impressive travelling circus to be gawked at, but no longer listened to, with little of the emotional weight of old. With that in mind, it would be easy to completely ignore the band's later output, but that would do the better moments a disservice. You will, nonetheless not find the abomination of 'Unsustainable' in this list, but you may find some surprising early omissions, as this list could have been different a year ago, and would probably be changed a year from now. What would make your Muse 'best of' list?

10 Rock Songs That Ripped Off Other Songs

10 Rock Bands That Destroyed Their Own Legacies

I am from Bangor, aged 24, and possess an MA in Journalism from The University Of Ulster. I have had work published in the Belfast Telegraph and interviewed several local footballers and Olympic athletes. I also run my own sports blog, 'Sporting Thought' in addition to contributing to What Culture.

7 Famous Songs About Real People (That Nobody Can Identify)

10 Rock Songs That Ripped Off Other Songs

10 Rock Bands That Destroyed Their Own Legacies

15 Most Underrated Hard Rock Albums Of All Time

10 Best Rock Drummers Of All Time