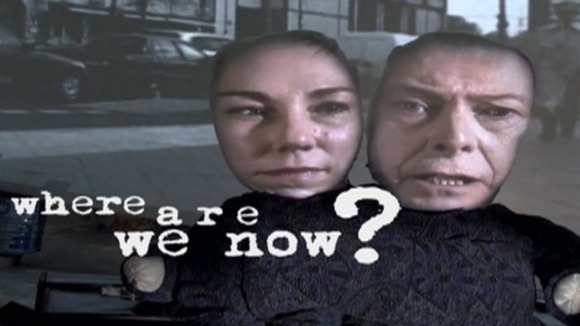 Tuesday the 8th of January 2013 might just be any other day to most but for David Bowie its the day hes celebrating his 66th birthday. Now, no doubt there are more than numerous people scattered around the here and there who are celebrating birthdays today, and no doubt many of them are celebrating their 66th birthday too. However, whilst I wish you all a sincere Happy Birthday, and a good start to a Happy New Year while Im at it, youre unfortunately not David Bowie. Now thats nothing to be ashamed of, though often as I sit conversing with myself in a faux-Bowie accent (a Fauxie if you will) or sing along to his songs to the best of my impressionistic talents (as can be noted here) I do sometimes regret that Im not David Bowie. Its unfortunate, but I get over it and Im three times younger than him. Take that David.

Anyway, hes marked his 66th birthday with the release of the song Where Are We Now? and this has cause one hell of a stir. This is Bowies first single in ten years and not only that, since he stopped performing live in 2006 he has rarely even been seen in public. Then out of nowhere, with no rumours prior, here arrives a new single coinciding with the announcement of a new album release in March going by the title of The Next Day (a live tour following? We can only hope). The surprise, and the ripple of its impact, that this release has had goes someway to showing that, as he always had, Bowie still maintains his mystique. No rumours, no build up press releases or appearances, just here it is fully formed. An impressive fete in this day and age in itself, let alone for someone so revered as Bowie. The song itself (uploaded to YouTube and available for download) is a sombre and melancholic piano-lead ballad. Starting immediately with a flourish of atmospherics, piano and percussion it slowly builds over steadily withering synths, rising and falling pianos all wrapped in echo and gently lush haze. Of course the star atop these clouds is Bowies vocal and though you can hear the age in his voice now, his performance is tender in its weariness but still defiant. Tied in with the songs lyrical references to his Berlin period, and The Next Days amended Heroes album cover artwork, this return may mournfully masked in history and memory but it looks set to be a majestic and stately return at that. Welcome back. http://youtu.be/FOyDTy9DtHQ
Want to write about David Bowie, Music News, In The News, Reviews, Comeback and The Next Day? Get started below...
Contributor
Morgan Roberts
Contributor
Twitter

10 Rock Bands That Never Made A Bad Album

10 Rock Albums That Were Ahead Of Their Time

12 Songs You Didn’t Know Were Sampled

10 Rock Albums That Were Killed By One Song

10 Classic Riffs Every Guitarist Should Know