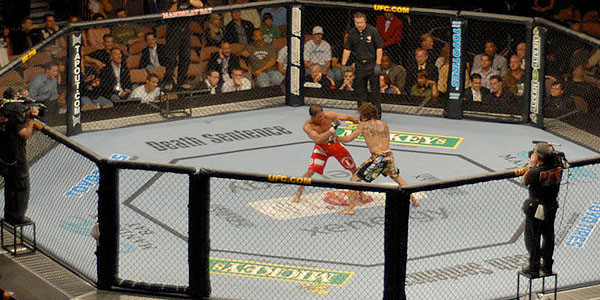 It is a sport which can be traced back to the Greek Olympic Games in 648BC when it went under the name of the pankration and consisted of primarily wrestling and striking. Its modern incarnation, the sport of mixed martial arts (MMA), is now the fastest growing sport in the world. This sudden emergence has naturally led to comparisons being drawn between MMA and boxing, the latter of which has been the primary combat sport of the modern era. These comparisons often lead to a conflict between fans and though both sports can coexist it is clear that there is one which is set to dominate the future of combat sports. Boxing is undoubtedly on the decline and, as sad as it is to say, it appears as if its decline is terminal. There is no doubting that it will always be around but the golden eras of Ali, Foreman and Frasier or Hagler, Hearns and Leonard will never again be repeated. The picture with regards to MMA is far different however and we are currently in a golden era for the sport. Here are five reasons why the combat sport of the future will once again be the pankration and why MMA will come to fill the void that the demise of boxing has left behind.

Boxing generally finishes by one of three ways; knockout, technical knockout or by decision. In Mixed Martial Arts a fight can end by the aforementioned methods with the addition of submissions. However within these parameters MMA has a far greater number of paths to achieving a finish. Boxing is solely due to either a single punch or an accumulation of punches. In MMA a fighter can use punches, knees, kicks, elbows or even slams to achieve either a knockout or technical knockout. Further to this there are countless numbers of submissions that can be used to win a fight. These generally fall into two categories: chokes (such as a rear naked or triangle) and joint locks (such as an armbar or ankle lock). This adds to the level of intrigue as fights can literally end at any moment in a number of different ways. Fighters also have to be constantly aware of the many different pitfalls which can end their night in an instant. The fact there are many ways to end a fight often gives the impression that MMA is more dangerous. This is a common misconception and MMA actually possesses a superior safety record to boxing. It may seem counter-intuitive but the smaller gloves in MMA make the sport safer with regards to long term brain trauma. Boxing gloves allow for repeated blows to the head whereas in MMA it is far easier to stop someone with a strike and therefore prevent them from receiving any further unnecessary punishment.
Gaming

Chris, 25, was born in Leeds in the North of England but grew up in Kilburn in North West London. He graduated from the University of Leeds in Philosophy and English and has recently completed an MA there in Writing for Performance and Publication. His interests include philosophy, reading, writing (sketches, tv scripts, short stories) hip hop and Stewart Lee. A life long sports fan his focuses are on Football, Boxing, Rugby League and Mixed Martial Arts. Drop him an email for any questions or potential writing collaborations on c.p.oconnor@leeds.ac.uk

Every FIFA World Cup Ranked From Worst To Best