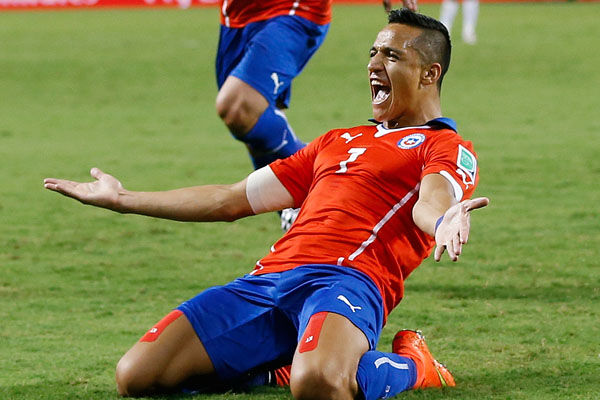 Kirsty Wigglesworth/AP/Press Association ImagesArsenal manager Arsene Wenger is confident of pulling off a £35 million double swoop for Barcelona forward Alexis Sanchez and Newcastle right-back Mathieu Debuchy, according to the Mirror. Chile's World Cup star Sanchez has indicated he is keen on a move to the Gunners, who must now agree a fee with his club Barcelona. The Catalans rate him at £25 million. Arsenal have also held talks with Newcastle over Debuchy, who has previously stated his desire to play in the Champions League. Wenger hopes a £10 million bid will be enough to secure the services of the France defender, but faces competition from Paris Saint-Germain and Monaco for his signature. The Gunners chief is confident he can land Debuchy, however, who he sees as an ideal replacement for Manchester City bound Bacary Sagna. Meanwhile Arsenal have held talks with Sanchez's advisers and believe personal terms could be agreed once they negotiate a fee with Barca. The Chilean could be used through the middle, as a forward or from the flank, but like Debuchy, the London side could face stiff competition. Premier League rivals Liverpool were hoping Sanchez would be included as part of the deal to take Luis Suarez to Barcelona and while the player isn't keen on a move to Merseyside, the Catalans have given the Reds permission to hold talks. There is also interest in Sanchez from Italy, but Arsenal are hopeful for further talks with the player's agent, Fernando Felicevich, in the coming days. Wenger is optimistic he can complete both deals and a major spending spree would go down well with Gunners fans hoping their club can build on last season's FA Cup success.
We need more writers about Newcastle, Arsenal, Arsene Wenger, Mathieu Debuchy and Alexis Sanchez! Get started below...
Contributor
Joseph Dempsey
Contributor
Twitter