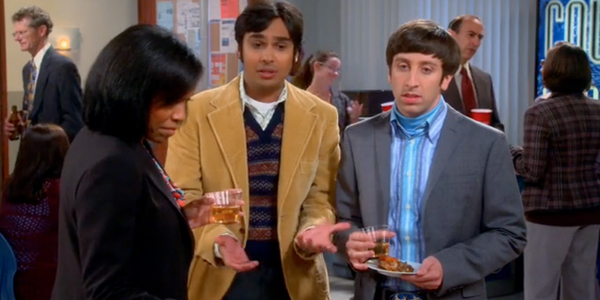 The seventh season of The Big Bang Theory recently premiered in September and didn't hold off on the laughs or the quirky facts about the natural universe. Episode 1 of season seven throws us an interesting fact from the flirtatious mouth of Raj. When he is attempting to make small talk with Janine Davis following her divorce Raj mentions that penguins are often unfaithful. While this is interesting in its own right it also brings up another point  that penguins are monogamous in the first place. There are many different species that actually practice monogamy and among them is the Emperor penguin. Like most species of penguins, the female lays an egg and then returns to sea to feed while the male incubates. This occurs once per year and  being serially monogamous  the penguins tend to remain faithful to their partner each year. Unfortunately for some penguins, however, there is around a fifteen percent chance that one will engage infidelity. Why is this? Well, it seems that there tends to sometimes be a narrow window of opportunity for mating and Emperor penguins prioritize breeding over devotion to their previous partner. While this makes perfect sense in a species who must focus on ensuring its survival through reproduction, it still doesn't paint a picture as to why penguins choose to be monogamous in the first place. Perhaps we give too little credit to some fellow species who may understand love in ways we cannot imagine. However, like us, they also seem to fall prey to mating habits that are less than forgivable. Unlike us, they have a much better excuse for their infidelity.
Contributor
WhatCulture
Contributor
Twitter

10 Times Star Trek: The Next Generation Tried To Be Sexy

Friends: 10 Reasons Why Ross Is The Worst Person Ever

10 TV Shows That Re-Used Props From Other Shows

Buffy The Vampire Slayer Quiz: Can You Finish These Quotes From Spike?

The IMPOSSIBLE Parks And Recreation Quiz!